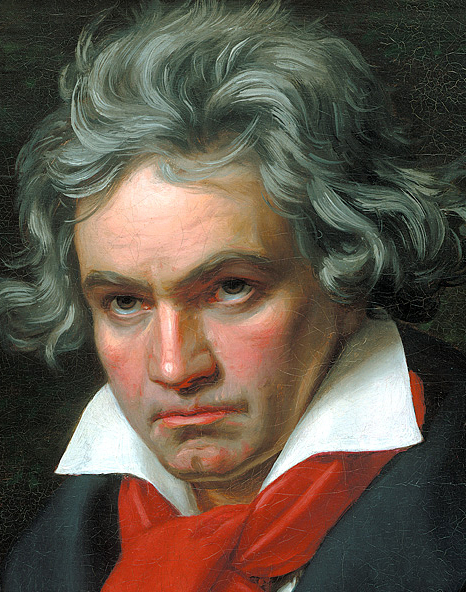 Ludwig van Beethoven ([beˈtɔven] or [beˈtoven]; in German [ˈluːtvɪç fan ˈbeːthoːfn̩]; Bonn, December 16, 1770 - Vienna, March 26, 1827) was a German composer, pianist and conductor. A crucial figure in Western cultured music, he was the last notable representative of Viennese classicism and is considered one of the greatest and most influential composers of all time. Counted among the greatest geniuses in the history of music, despite the deafness (hypoacusis) that struck him even before he was thirty, he continued to compose, direct and play, leaving a fundamental musical production, extraordinary for its expressive strength and ability. Its influence was of vital importance for the musical language of the nineteenth and subsequent centuries, so much so that it represented a model for many composers. The myth of Beethoven "heroic artist", capable of transmitting all his emotions, personal experiences or feelings through his work, grew very much in the Romantic period; however, while anticipating many aspects of the future Romanticism, his adherence to the rules of harmony in the modulations, the rejection of chromatisms in the melodies, the attention to the formal balance of the pieces place him in the wake of the tradition of classicism. his orchestral, piano and chamber production are of great importance. Masterpieces of the respective genres also remain sacred compositions by him, such as the Missa Solemnis, and theatrical, such as Fidelio.

Beethoven's family, of humble origins, had perpetuated a musical tradition for at least two generations. His paternal grandfather, from whom he took his name, Ludwig van Beethoven (Malines, 1712 - Bonn, 1773) came from a family from Flanders (in northern Belgium) of peasants and humble workers, originally from Brabant. The particle "van" has therefore (in all probability) no noble origins and the surname "Beethoven" almost certainly derives from the village of Bettenhoven, near Waremme, in the province of Liège. Around 1500, the name "van Beethoven" was written as "van Bettehoven". A good musician, Beethoven's grandfather had moved to Bonn in 1732, becoming Kapellmeister (choirmaster) of the Elector of Cologne and marrying Maria Josepha Pall in 1733. His son, Johann van Beethoven (1740 - 1792), Beethoven's father, was a musician and tenor at the court of the Prince Archbishop Elector of Cologne Clement Augustus of Bavaria. Mediocre and brutal man, addicted to alcohol, he educated his children with great harshness. The mother, Maria Magdalena van Beethoven, born with the surname Keverich (December 19, 1746 - 1787), was a native of Ehrenbreitstein, in Koblenz, and was the daughter of a cook of the Elector of Trier. Her ancestors came from the Moselle, most likely from Köwerich, hence the surname. At the age of seventeen, in 1762 she was married to a servant and waiter of the Elector of Trier, called Laym, and by him she had a son who died quite soon. At just nineteen, in 1764, she was left a widow. Three years later, on November 12, 1767, she contracted a second marriage, this time with Johann van Beethoven; on April 2, 1769 their first son, Ludwig Maria van Beethoven, was baptized and died after just six days. On December 17, 1770, her third child, the second of their marriage, was baptized in the Remigiuskirche (St. Remigius Church) in Bonn. In the baptism book it was recorded under the name of Ludovicus van Beethoven. It is not possible to document with certainty his exact date of birth, which remains conventionally accepted as of December 16, 1770 (at the time the children were usually baptized the day after the actual birth, but there is no documentary evidence that this happened in Beethoven's case. ). There