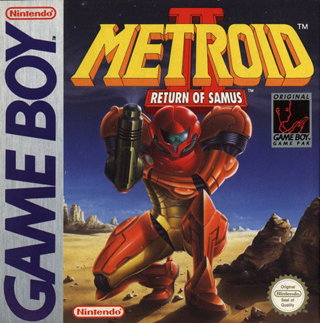 Metroid II: Return of Samus (メ ト ロ イ ド II RETURN OF SAMUS Metoroido Tsū Ritān Obu Samusu?) Is a 1991 platform video game developed and published by Nintendo for the Game Boy. Second title in the Metroid series, it is the only one released for the Nintendo handheld console. The game was later made available via Virtual Console for Nintendo 3DS. Chronologically set after the events of Metroid Prime 3: Corruption and before Super Metroid, in the game Samus Aran is once again on a mission to eliminate creatures belonging to the Metroid race.

It's been several years since bounty hunter Samus Aran put an end to the nightmare of the Space Pirate experiments on Metroids on planet Zebes. To ensure that such an event could never happen again, the Galactic Federation sent a team to planet SR-388 to finally eradicate the Metroid race. After some time the team did not return and there was no news about it. Then the Federation sent a rescue patrol to the planet. No survivors remained. Then the Galactic Federation realized that the only person capable of destroying the Metroids was Samus Aran, the one who had previously dealt with them. Therefore, she was promised a substantial sum of money. Samus accepted the assignment and left for the planet SR-388. He landed near an extinct volcano and entered a cave home to the Metroids. One after another, Samus destroyed the Metroids, learning that they could undergo considerable mutations. In fact, from small jellyfish-like creatures as they were, they could become gigantic reptile-like monsters. After destroying all the Metroids, Samus found himself face to face with a Metroid Sovereign. The bounty hunter waged a battle against it and defeated it. Samus emerged from the deep caves of the planet, but on her path he found a Metroid egg in front of her. The egg hatched, and the little Metroid that came out recognized Samus as a mother. Samus took the baby with him, put him in a container and escaped from the planet. Realizing the scientific importance that Metroid possessed, Samus handed it over to a research laboratory. That Metroid was going to be a key element in Samus' (Super Metroid) future.

The gameplay is similar to that of the first episode. To continue in the game, however, the Metroids must be eliminated. As they are killed, the level of the lava will lower, making new areas accessible in the depths of the volcano. Additionally, this is the first game in the series to introduce save modules not present in the first, which used a password system.