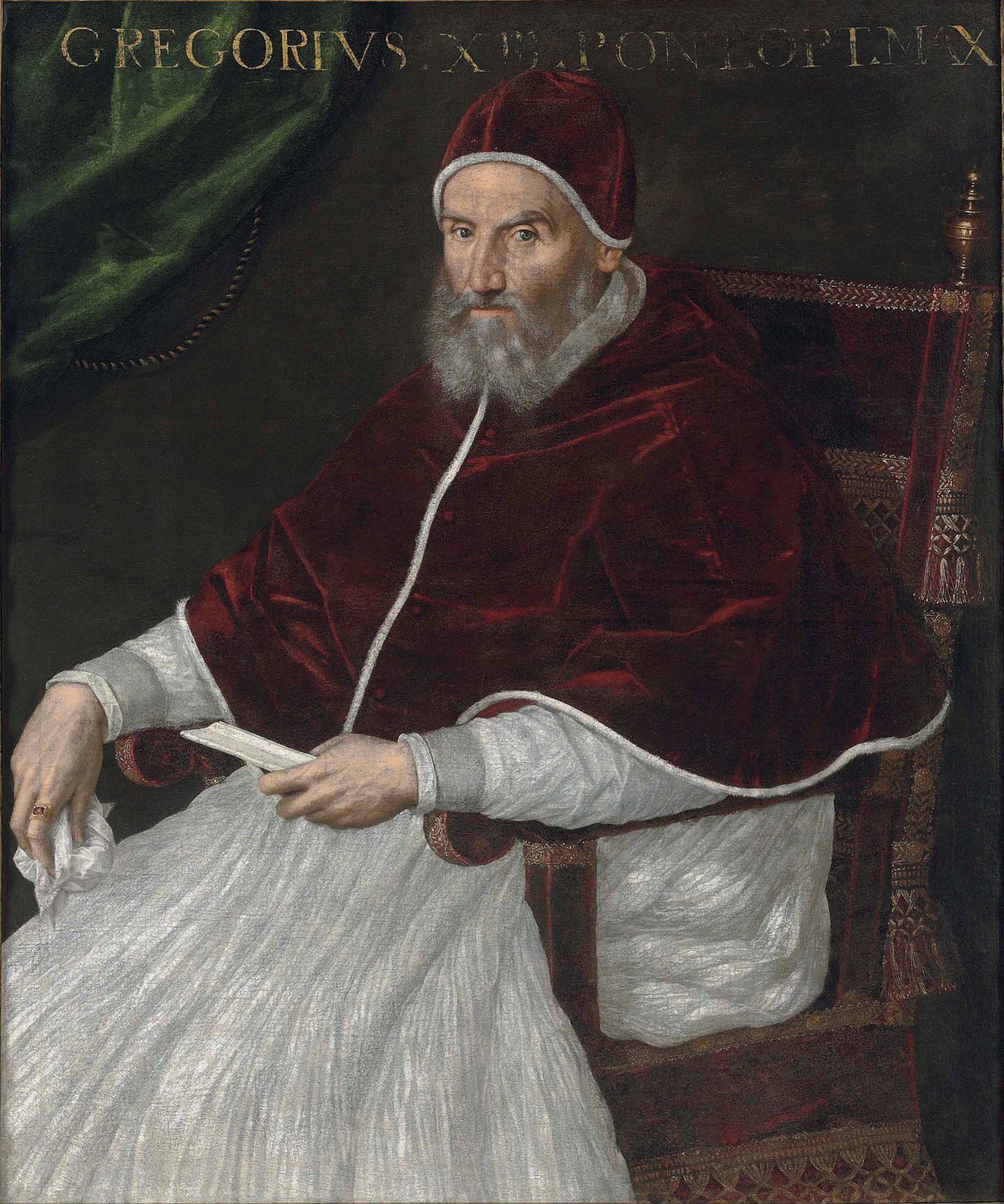 Gregory XIII, in Latin: Gregorius XIII, born Ugo Boncompagni (Bologna, 7 January 1502 - Rome, 10 April 1585), was the 226th pope of the Catholic Church (225th successor of Peter) from 13 May 1572 to his death. For subsequent historiography he is considered as one of the most important popes of the modern age, especially as regards the implementation of the Catholic Reform and the reform made to the calendar that takes his name.

Ugo Boncompagni was born in Bologna on 7 January 1502 to Cristoforo Boncompagni (1470-1547), a wealthy merchant, and Angela Marescalchi (b.1480), the fourth of ten children (seven boys and three girls). He studied law at the University of Bologna, graduating in 1530 in utroque iure. In the same year he attended the Coronation of Charles V as Emperor of the Holy Roman Empire, of which a detailed account is preserved. Subsequently he began his career as a lecturer in law, also in the University of Bologna. Among his most illustrious pupils was Alessandro Farnese, Ottone di Waldburg, Reginald Pole, Stanislao Osio, Paolo Burali d'Arezzo and S. Carlo Borromeo. In 1539 he resigned from the professorship and, at the invitation of Cardinal Pietro Paolo Parisio, he went to Rome where he was appointed jurisperist. He received the tonsure (rite that precedes the conferral of sacred orders) on 1 June 1539 and was ordained a priest in 1542. Pope Paul III appreciated his preparation: he gave him the position of first judge of the capital, then in 1546 he inserted him into the college of abbreviators at the Council of Trent as an expert in canon law. In 1547 his father died; Ugo inherited a large part of the family assets since his elder brother had died without heirs: among them, even half of the family palace. To secure an heir, he decided to have a child with an unmarried woman, running the risk of causing a scandal and jeopardizing his career. His son was born on May 8, 1548 in Bologna and was called Giacomo. He was legitimized on July 5, 1548. Pope Paul IV (1555-1559), in addition to aggregating him as datarius to the residence of cardinal nephew Carlo Carafa, recognizing his qualities as a jurist, used it to carry out various diplomatic missions. Towards the end of 1561, Boncompagni was again sent to the Council of Trent. Thanks to his proven competence as a canonist and his exceptional commitment to work, he rendered valuable services for the resolution of some problems in the last conciliar session (1562-63). At the end of the Council he returned to Rome, where in 1565 and Pius IV made him a cardinal, with the title of cardinal presbyter of San Sisto. He was then sent to Spain as a papal legate. Thanks to this new mandate, he made himself known and well-liked by the Spanish sovereign, Philip II, to the point of gaining his trust. It was also thanks to him that the trial for heresy, initiated against the archbishop of Toledo Bartolomé Carranza, ended without disagreements with the king. Ugo Boncompagni participated in two conclaves: that of 1565-66 and that of 1572, which ended with his election.

1531-1539: lecturer at the University of Bologna; February 23, 1539: first assignment in the Roman Curia as abbreviation of the main park 2 March 1539: solicitor of the apostolic letters; 1 June 1539: receives the tonsure; 15 October 1539: collateral judge in Campidoglio (seat of the civil court of Rome); 1542: ordained priest; 7 January 1545: he is a referendum at the tribunal of the Apostolic Signatura; 7 October 1552: appointed secretary of Julius III; 1554 or 1555: papal legate in Campagna and Marittima; 1555: Paul IV joins him to the cardinal nephew Carlo Carafa, at the Dataria; January 1556: member of the college charged with studying the reform of the Church; May 1556: papal legate in France; 1557: linked to Brussels; 1558: he is a member of the commission charged with evaluating those entitled to success