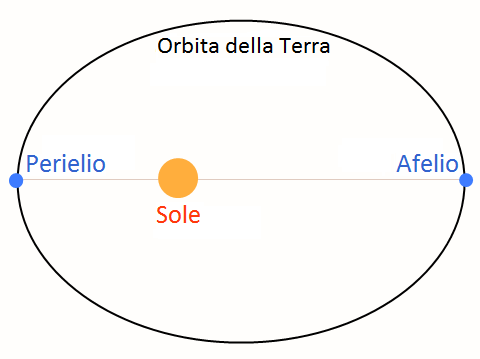 In astronomy, perihelion (from the Greek perì around, helios sun) is the point of minimum distance of a body of the Solar System (planet, asteroid, comet, artificial satellite, etc.) from the Sun. It is therefore an apsis. Depending on the eccentricity of the orbit, the minimum body-sun distance and the maximum distance can be more or less different from the average distance. By analogy, the analogous point of minimum distance for a body (planet or star, etc.) orbiting a star other than the Sun is also called perihelion, although in this case the term periastro should be used. In the case of a body orbiting the Earth, perigee is used. Conversely, the point of maximum distance is called aphelion. The imaginary line that unites aphelium and perihelion is called the apsid line. The angular position of the perihelion along the orbit of the various planets moves very slowly (by a few tens or hundreds of arc seconds per century), due to the gravitational interaction with the other planets: this effect is called anomalistic precession or precession of the perihelion. The precessional velocity of Mercury, however, is significantly greater than that theoretically calculated on the basis of Newton's laws. This difference was explained by Albert Einstein as an effect of the theory of general relativity: this represented one of the first experimental confirmations of this theory.

Perihelion of the Earth

In the case of the Earth, perihelion is about 147 million kilometers from the Sun, 2.5 million kilometers less than the average distance. The Earth passes through it in January, on average 13 days after the northern winter solstice. In the year 2017, perihelion was reached on January 4th (14 UTC). For the dates and times in the various years, see the table alongside.