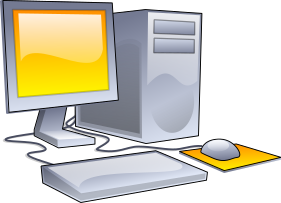 A personal computer (from the English language, literal Italian "personal computer" or "personal computer", usually abbreviated to PC) is any computer that lends itself to personal use and personalization by the user in daily use . The term personal computer was born in the 1980s when the first computers for the general public were put on the market. In fact, previously computers were inaccessible to ordinary people due to their huge size and high price, and were mainly purchased by researchers or large companies. Currently the term personal computer (PC) refers to desktop computers and laptop computers.A PC, at the hardware level, is usually built according to the von Neumann architecture and is composed of a central processing unit, in English central processing unit, abbreviated to CPU (processor), and by various peripherals, often to facilitate their use in a typically user friendly manner. At the software level, the PC uses an operating system that implements the so-called desk metaphor in its user interface. Over time, the PC has in fact supplanted the old typewriter for personal and office use thanks to word processing programs, adding numerous other features (eg calculation, graphics, design, etc.) thanks to its easy programmability.

The first computer, which at that time was called BESM, was invented in 1953 in the Soviet Union by Sergej Lebedev. The project was backed by the Communist Party and mandated, but was not mass-produced due to opposition from the Ministry of Machine and Tool Building. In 1965 with the Kosygin reform, defined as the beginning of the transition to the capitalist economy of the USSR, the project was slowly abandoned and completely stopped in 1967. In the early seventies, people entering academic or research institutions had the opportunity to use systems such as the LINC which were single-user, interactive and could be used for prolonged work sessions; however, these systems were still too expensive for a single person to own. In the same decade, Hewlett Packard introduced BASIC programmable computers that could be placed on top of a normal desk (HP 9800 series), including a keyboard, small one-line display, and printer. The 1973 Wang 2200 had a full-sized (CRT) monitor with magnetic tape (cassette) storage. The 1975 IBM 5100 had a small CRT display and could be programmed in BASIC and APL. However, these were still expensive specialized computers, designed for scientific or business use. The introduction of microprocessors, a single integrated circuit with all the circuitry that previously occupied large houses, led to the proliferation of personal computers after 1975. The first personal computers - generally called microcomputers - were often sold in kit form and in limited volumes. , and were largely intended for hobbyists and technicians. The programming was carried out through switches and the output was provided through LEDs on the front panel. Practical use would have required peripherals such as keyboards, terminals, disk drives, and printers. Micral N was the first commercial microcomputer, not sold as a kit, based on a microprocessor, the Intel 8008. It was built starting in 1972 and approximately 90,000 units were sold. The Sphere 1 computer is considered to be the first modern type computer. It was made in 1975 by a computer pioneer, Michael Wise. At first, Sphere 1 was sold as a kit, but was later sold fully assembled, including a keyboard, numeric keypad, and monitor. In 1976 Steve Jobs and Steve Wozniak sold the Apple I computer motherboard, which contained c