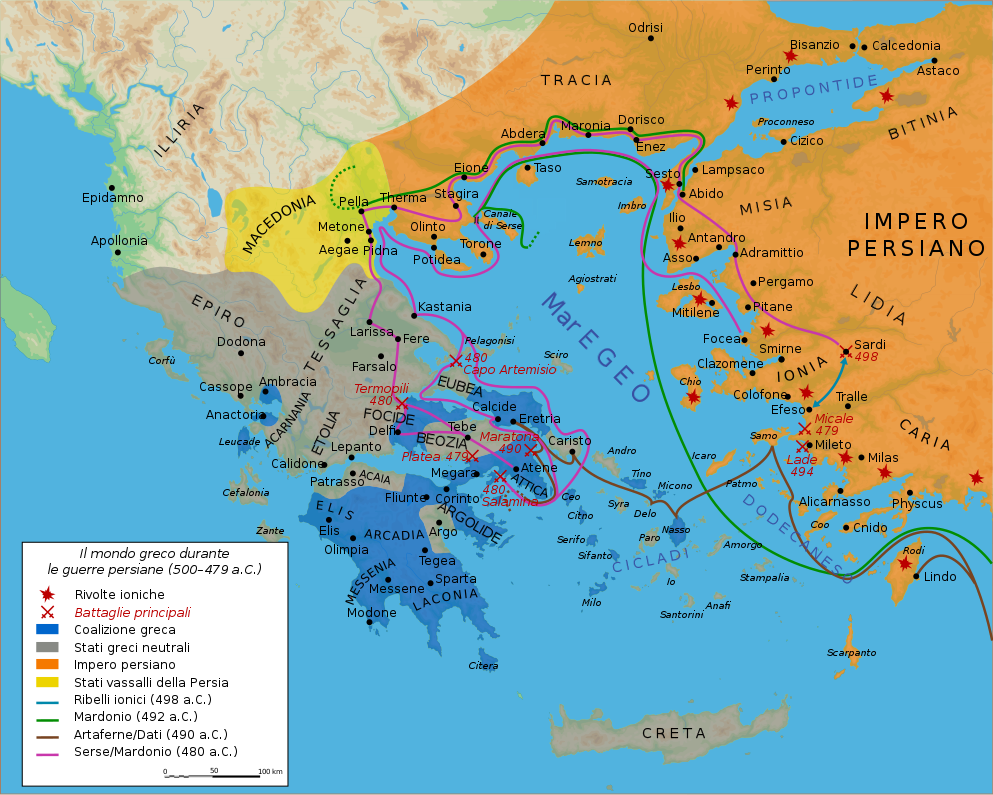 The First Persian War broke out in 492 BC. and ended with the Athenian victory in the battle of Marathon, in 490 BC. The conflict, formed by two distinct expeditions, was wanted by the king of Persia Darius I mainly to punish Athens and Eretria, who had previously supported the poleis of Ionia during their revolt against the Persian rule, thus arousing the wrath of Darius, who in the conflict also saw the opportunity to extend his dominion in Europe and to secure the western frontier of his vast empire. During the first campaign, which took place in 492 BC, Mardonius was sent to Macedonia and Thrace, where, however, he was defeated by the Gray Thracians. Later this campaign was interrupted by the sinking of the Persian fleet in a storm off Mount Athos. The following year Darius sent envoys all over Greece, asking the Greeks to become his subjects: almost all cities accepted this offer, with the exception of Athens and Sparta, who killed the ambassadors instead. Since Athens re-proposed a provocative act against him and that Sparta had openly declared war on him, Darius ordered another military expedition for the following year. The second campaign, which took place in 490 BC, was commanded by Dati and Artaferne. The expedition initially concentrated on the conquest of the Cyclades islands, which were all annexed to the Persian empire (including Naxos, which in 499 BC had managed to resist); upon reaching the mainland, the troops landed in Eretria, which was besieged, conquered and razed to the ground, while its citizens were enslaved. Finally the Persian army headed for Attica and landed near Marathon, where it was severely defeated by the small army deployed by the poleis of Athens and Platea. This defeat prevented the continuation of the expedition, forcing the Persians to return to Asia with the Eretrian prisoners. However, the Persian campaign had managed to achieve most of its objectives, punishing most of those who had supported the Ionian rebels and conquering the Aegean islands. Given the abrupt interruption of this expedition, Darius prepared another much larger one to definitively subdue all of Greece and to punish Athens and Sparta; this expedition, however, continued to be postponed due to the outbreak of local insurrections within the Achaemenid empire and Darius in the meantime died of old age. The task of conducting a new campaign was then left to his son Xerxes I, who carried it out in 480 BC.

Historians agree that the main source concerning the Persian wars is the work of Herodotus The Stories, the reliability of which has always been debated. The author, in fact, claims to have based himself on oral sources and also claims to have as its ultimate goal that of making posterity remember the history of the Persian wars, taking the Homeric epic as a model. Therefore, he did not write a historiographical treatise according to today's dictates since he did not cite his sources, nor did he report technical data that would certainly not be overlooked today, while some historians believe that Herodotus, in many cases, intended to corroborate his ideas at the expense of their reliability, without however producing evidence to support this hypothesis; most scholars believe him to be an honest and not biased historian, even if he reported many data clearly exaggerated, to the point of bordering on myth. It is therefore necessary to carefully evaluate the information he reports when he declares to have witnessed the facts (the Persian wars, for example, broke out before he was born and took place during his first years of life), as well as the data produced by his informants, the which may have given him incorrect data. Herodotus had very little knowledge of warfare and tactics, therefore he described the Persian wars in a way that is re