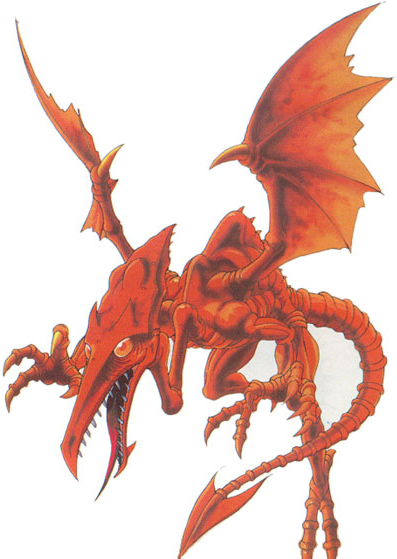 Ridley (リ ド リ ー?) Is a fictional character and one of the main antagonists of the Metroid videogame saga. He led the Space Pirates during the raid on the K-2L space colony in which Samus Aran's parents, Rodney and Virginia Aran were murdered, and during the assault on the Ceres Space Colony, in Super Metroid, he kidnapped the last example of Metroid taking it with him to the planet Zebes. Ridley's name is a tribute to Alien director Ridley Scott.

Ridley is a huge dragon-like alien with a slender body and a vaguely humanoid shape. His skin is purple in color (dark gray in some games) and his back has two large bat-like wings. His tail, thin and elastic, ends with a pointed blade. His forelimbs are quite long and provided with hands with three or four clawed fingers. His feet are prehensile and birdlike. His neck is thin and constantly bent forward, suggesting he is made up of only two bones. The head has the features similar to those of a pteranodon, but with a toothed "beak". In his newborn stage (only appeared in Other M), Ridley looks like a white rabbit-chick hybrid, with long hind legs and a huge mouth studded with sharp teeth. In the adolescent stage (which also appeared only in Other M), its appearance is slightly more similar to the adult stage: the differences are the thick hair on the back, the faded purple color and the absence of the bump behind the head and wings ( the latter are developing from growths located on the back). moreover in this form he has movements similar to those of a gorilla. In the Metroid Prime series, Ridley is wearing mechanical prostheses with which he can still operate. In this form he is called Meta Ridley. In Metroid: Samus Returns, Ridley still has Meta Ridley's prostheses but thanks to the Phazon's care, not only the prostheses act as weapons, but Ridley's skin becomes clearer, but little Metroid, after taking away the Phazon's strength. it makes it purple again, destroying the prostheses as well.

Thanks to his wings, Ridley is able to fly, and attacks using his claws, piercing enemies with his tail and throwing fireballs from his mouth.

Ridley's past prior to Mission Zero is narrated in the canonical manga. The space pirate empire was born after the Galactic Federation (FG) proclaimed peace in the Galaxy. Taking advantage of this, the Pirates attacked several colonies, one of them on the planet K-2L. Ridley and her pirates attacked all the Earth settlers on the planet and Ridley met a little girl he considered too innocent to kill her right away, Samus Aran. Ridley then became involved in the kamikaze explosion of Rodney, Samus' father, leaving it with serious injuries. Wanting to avenge his dead comrades, Ridley attempts to kill Samus, but Virginia, the child's mother, collects Ridley's Plasma Beams. Samus runs away in fright by meeting the Chozos, while Ridley devours Virginia's corpse to recompose the cells in her body damaged by the explosion.

30 years later, Samus returns to Zebes, where she was raised by the Chozos. There she discovers that the Chozo's AI, Mother Brain, has achieved the role of leader of the Space Pirates, along with Chozo Voce Grigia. At that moment Ridley enters the hall recognizing Aran. Ridley, to scare the girl, tells her about how he ate Virginia's body. Samus is so traumatized that she will later beg her comrades to kill her, since she was horrified. Just before the Federation attacked Zebes, Gray Voice reveals her double-cross and tries to stop Ridley, but Ridley with the