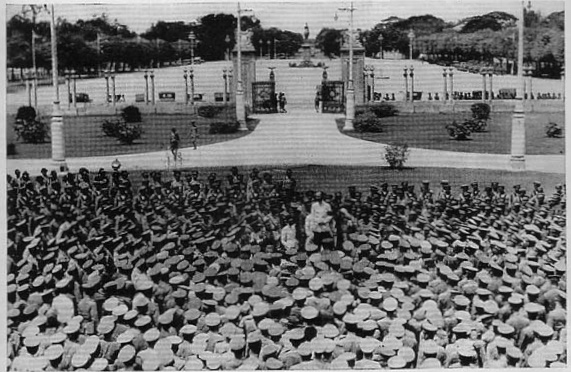 The Siamese Revolution of 1932, also called the Siamese coup of 1932 (in Thai: การ ปฏิวัติ สยาม พ.ศ. 2475 or การ เปลี่ยนแปลง การ ปกครอง สยาม พ.ศ. 2475) took place on June 24, 1932 in Bangkok, capital of the Kingdom of Rattanakosin, today's Thailand. It was actually a bloodless military coup and led to the introduction of the constitutional monarchy and the end of absolute monarchy, which had characterized Siamese politics for the previous seven centuries. The revolution also decreed the end of the Kingdom of Rattanakosin (Rattanakosin is the central nucleus around which Bangkok developed), and the country kept the Siam name by which it had been known for centuries. The change of government had been planned a few years earlier by a group of university students, including some cadets of the armed forces, who were studying in Europe and who, upon returning to Siam, had clandestinely founded the Khana Ratsadon (People's Party) for this purpose. first political party in the country. The ideals of democracy had been the basis of the initiative but were carried out without the support of the people, considered unprepared and kept in the dark to avoid leaks that could compromise the success of the coup. It was therefore the senior military officers involved in the project who organized the operations of June 24 and monopolized the policy of the new course from the beginning. The first provisional constitution, signed by King Prajadhipok (Rama VII) three days after the coup, was written by the progressive Pridi Banomyong, who was one of the founders of the party and who is considered the father of Thai democracy. After the coup, the decision-making power of the rulers of the Chakri dynasty, at the head of Siam since 1782, became irrelevant and for several years their role was limited to purely formal tasks.

When the coup d'état was carried out, Siam was going through a political-financial crisis that had distant roots in various aspects of the life of the country, which were interconnected. The efforts to preserve independence in the period of European colonialism in the Far East, the great expenses incurred for the reorganization and modernization of the country, the struggle between the monarchy and the aristocracy to control power, as well as the emergence of new demands for democracy coming from Europe, created the conditions for the coup d'état that imposed the constitutional monarchy.

European colonialism and independence of Siam

The 19th century marked the arrival of French and British colonialism in the Far East. The British East India Company acquired control of the Malay sultanates from the end of the eighteenth century. The Anglo-Burmese Wars led to the annexation of Burma to British India between 1824 and 1886. The French completed the conquest of the Vietnamese territories between 1858 and 1885 and established French Indochina, which also secured the Laotian and Cambodian territories before the end of the century. The British highlighted the instability of the Chinese Empire by humiliating it in the Opium Wars between 1839 and 1860, securing political and commercial rights that further weakened the Qing Dynasty. In this scenario, Siam was the only Southeast Asian state to maintain independence. Siamese diplomacy had opened its economy to British influence in 1826 with the Burney treaty, during the reign of Rama III. New advantages were granted by Siam to the British with the Bowring treaty of 1855 at the time of Rama IV, which was followed by other similar treaties with other Western countries. Rama IV identified the modernization of Siam as a priority to keep pace with the West and avoid colonization. His reign was dominated by the great aristocratic families of Siam, in particular