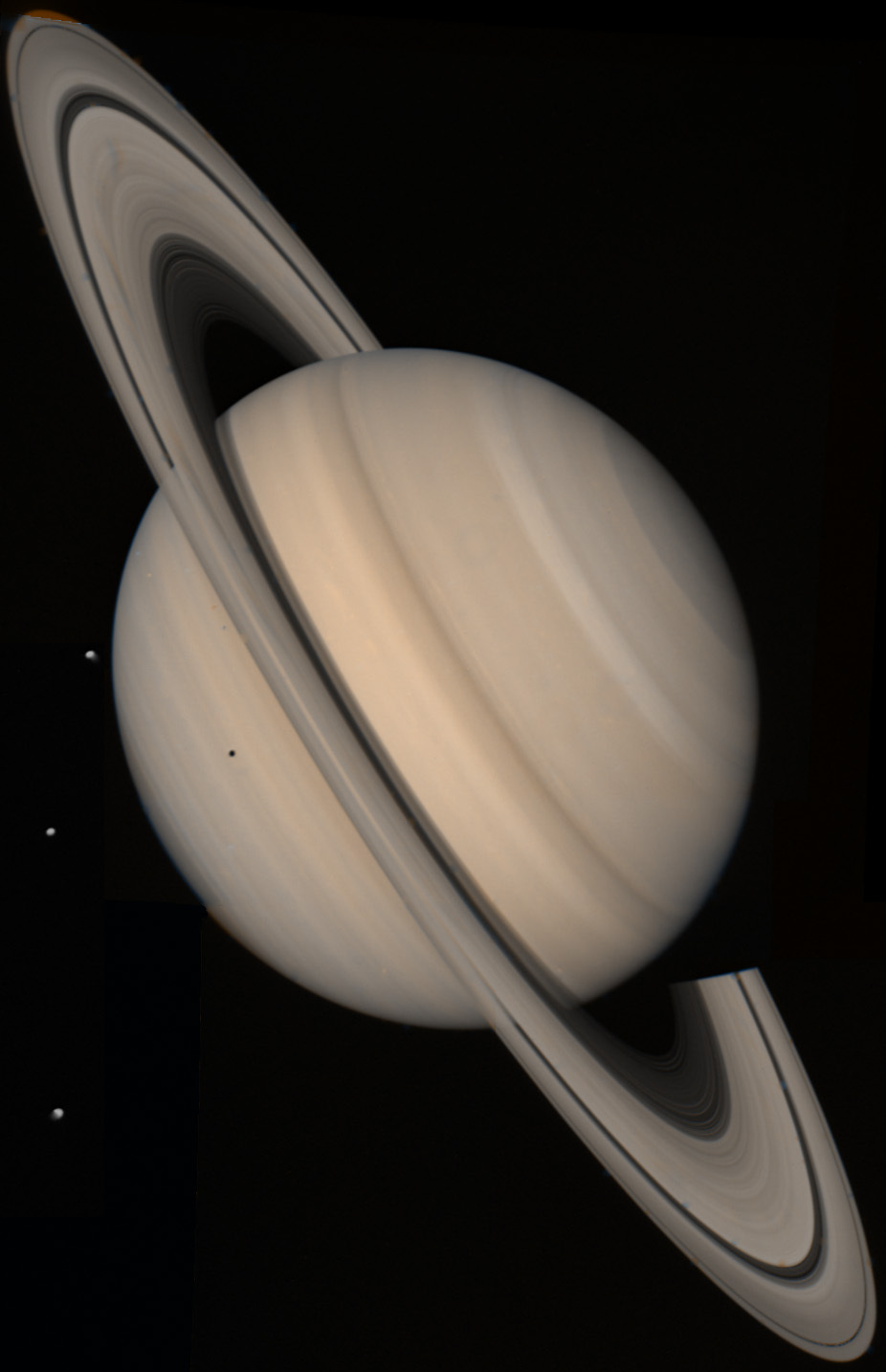 Saturn is the sixth planet in the solar system in order of distance from the Sun and the second most massive planet after Jupiter. With an average radius 9.48 times that of the Earth and a mass 95 times greater than that of the Earth. Saturn, with Jupiter, Uranus and Neptune, is classified as a gas giant. The name derives from the homonymous god of Roman mythology, counterpart of the Greek titan Cronus. Its astronomical symbol (♄) is a stylized representation of the scythe of the god of agriculture. Saturn is composed of 95% hydrogen and 3% helium followed by the other elements. The core, consisting of silicates and ices, is surrounded by a thick layer of metallic hydrogen and therefore by a gaseous outer layer. Winds in Saturn's atmosphere can reach 1800 km / h, making it significantly faster than those on Jupiter and slightly slower than those blowing in Neptune's atmosphere, Saturn has an extensive and conspicuous system of rings consisting mainly of ice particles and silicate powders. With its 82 known moons, Saturn holds the record for the largest number of satellites in the solar system. Of these, Titan is the largest and also the only moon in the solar system to have a significant atmosphere.

The best time to observe Saturn and its rings is opposition, when the elongation of the planet is 180º and Saturn is therefore in the part of the sky opposite to the Sun. Saturn appears to the naked eye in the night sky as a bright gray dot. yellowish with an apparent magnitude that usually oscillates between 1 and 0. Its diameter is too small to be able to perceive it and with the naked eye the planet always appears as a point so you need a telescope or binoculars with at least 30 magnification to be able to distinguish the disk of the planet and rings. Saturn has a period of revolution of 29.5 years and about every 15 years, when it is at certain points in its orbit, the rings disappear briefly from view as they are perfectly cut-off when viewed from the Earth. the brightness of Saturn also depends on the position of the rings: if they are oriented in a favorable way, as happened for example in 2002, they are more visible and contribute to significantly increase the apparent brightness of Saturn. Sometimes Saturn, like other bodies of the solar system that lie near the ecliptic, it is hidden by the Moon. In the case of Saturn, the phenomenon takes place with certain cycles: a period of twelve months, during which the planet is hidden twelve times by the Moon, follows a period of about five years, during which no occultations occur. This happens because the Moon's orbit around the Earth is inclined with respect to the Earth's orbit around the Sun, and only when Saturn is at the point where the Moon's orbit crosses the "ecliptic plane" do occultations occur. .

Saturn is the penultimate of the planets visible to the naked eye and has been known since ancient times. Babylonian astronomers regularly observed and recorded the movements of the planet. In ancient Roman mythology the god Saturn, from which the planet takes its name, was the god of agriculture and was considered the equivalent of the Greek titan Cronus. The Greek scientist Ptolemy based his calculations of Saturn's orbit on observations made while the planet was in opposition. rings. Initially the planet appeared to him accompanied by two other bodies on the sides, and therefore he called it "three-bodied". With subsequent observations and the use of more advanced instruments, the variation of the visual angle of the rings showed him gradually