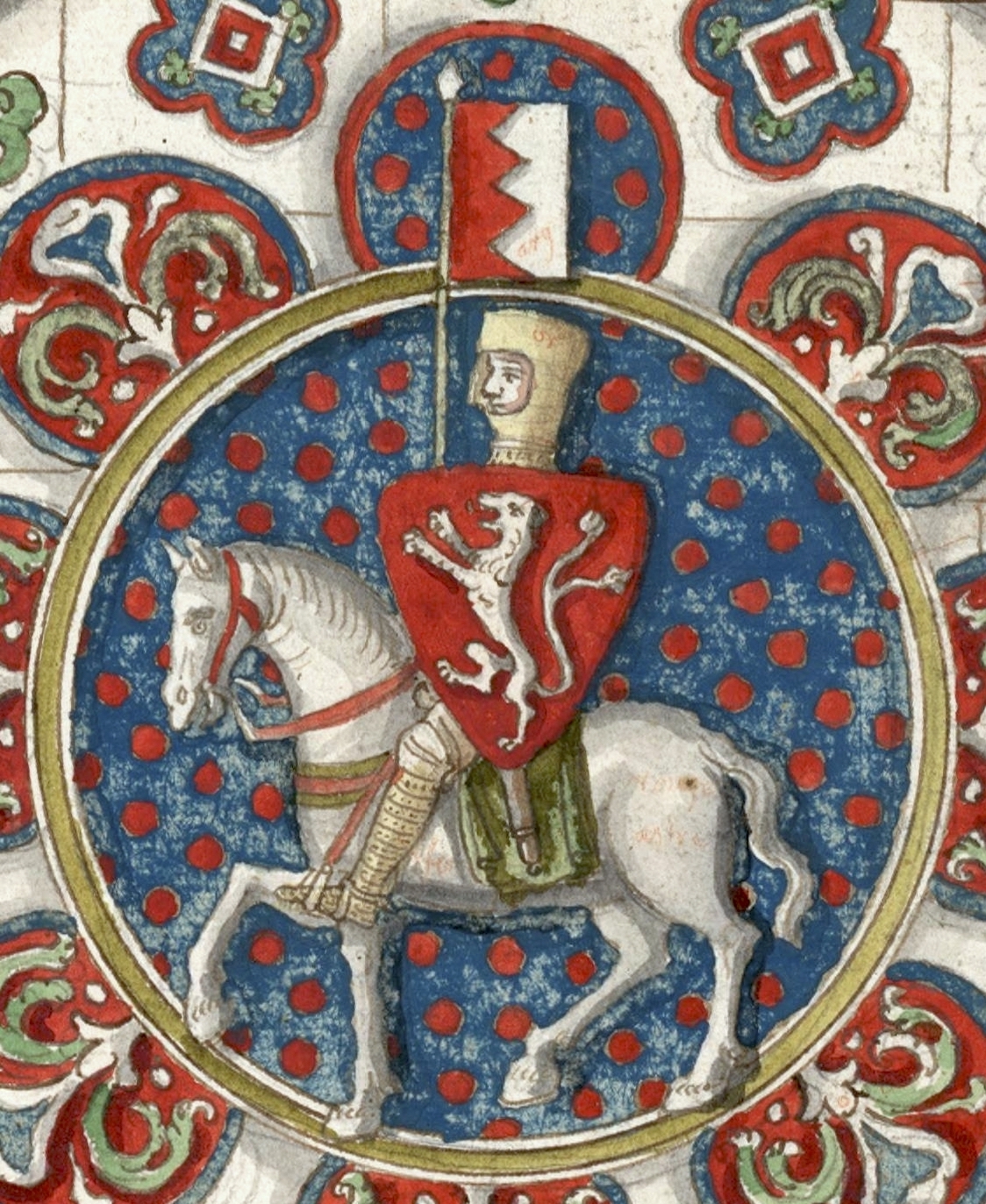 Simon V of Montfort, 6th Earl of Leicester (Montfort-l'Amaury, 23 May 1208 - Evesham, 4 August 1265), was an Anglo-French nobleman, known as the principal leader of the Second Barons' War against King Henry III of 'England. After the rebellion of 1263-1264, Simon V became de facto Lord of England and convened two important parliaments: the first, directly elected, took absolute power away from the King, while the second included the bourgeois for the first time. After about a year of rule Montfort was defeated and killed by forces loyal to the King at the Battle of Evesham.

Simon V was the youngest son of Simon IV of Montfort, a French nobleman and crusader, and of Alix of Montmorency. As a boy, Simon V accompanied his parents during his father's military campaign against the Cathars. He was with his mother when, during the siege of Toulouse (1218), his father was killed by a rock thrown by a siege machine. It is conceivable that Simon V also took part in the Albigensian crusade around 1225. On the death of his father, Simon V inherited his paternal possessions in England, or the title of Earl of Leicester, while the French domains passed to his brother Amaury. This subdivision of the paternal inheritance was sanctioned in 1229, when Simon V renounced his rights over the French domains and Amaury over the English ones. The following year Simon V received his inheritance, after having requested it the year before; however, it is necessary to remember that he did not take full possession of it for several years, and that the title of Count was not formally recognized. Simon V was also a distant cousin of Henry III; his ancestor Simon I of Montfort was the father of Bertrade of Montfort, who in turn was the great-grandmother of Henry II of England.

In January 1238 Simone V married Eleonora Plantageneto, daughter of John of England and Isabella d'Angoulême as well as sister of Henry III. Although the marriage took place with the king's approval, the act itself was ratified secretly and without consulting the Great Barons, as a marriage of such importance would have required. Eleonora had previously been married to William the Marshal, second Earl of Pembroke and had taken an oath of perennial chastity on the death of her first husband but which she broke at the age of sixteen, when she married Simon V. Archbishop of Canterbury, Edmondo Rich, condemned the marriage for this very reason. The English nobility protested the marriage of the king's sister to a foreign noble of modest lineage; furthermore, Eleonora's brother, Richard of Cornwall, led a revolt against this decision. It has been speculated that Henry III probably paid his brother 6,000 marks to stop the revolt. Initially, relations between Henry III and Simon V were good. The sovereign assisted Simon V when he left for Rome to receive papal approval for his marriage. When in November 1238 the first child was born from the union of Simone V and Eleonora, he was baptized with the name of Henry in honor of his uncle. In February of the following year Simon V obtained the recognition of his noble title and was invested Earl of Leicester. He also served as royal advisor and was among the nine godparents of Henry III's eldest son, Prince Edward.

The Crusades and the break with Henry III

Shortly after Edoardo's birth, the relationship broke down. Simon V owed a large sum of money to Thomas II of Savoy, Queen Eleonora's uncle, and had used the name of Henry III as a guarantee of repayment. The king, evidently not aware of the fact, when he found out what had happened, was furious with Simon V. Since Montfort had announced two years earlier his intention to wear the cross