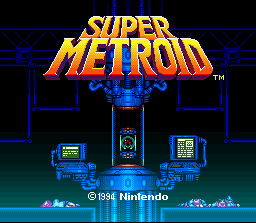 Super Metroid (ス ー パ ー メ ト ロ イ ド Sūpā Metoroido?) Is a sci-fi themed dynamic adventure video game designed by Nintendo Research & Development 1, programmed by Intelligent Systems and released in 1994 by Nintendo for the Super Nintendo Entertainment System. Super Metroid is the third installment of the Metroid saga and with its 24 megabit cartridge it has gone down in history for being the largest and most demanding video game in terms of memory for some time. The storyline, which is chronologically located between Metroid II: Return of Samus (1991) and Metroid: Other M (2010), sees protagonist Samus Aran track down and retrieve Metroid's puppy kidnapped by his rival Ridley and taken to the planet Zebes. Super Metroid turns out to be a 2D platform video game loaded with action and adventure elements, where Samus must face the hostile native forces and space pirates, his archenemies, on the planet, empowering himself with the objects he finds along the way. It is a video game that makes the player's exploratory spirit a central point since, unlike the other platforms that preceded it, its development is not exclusively linear and is full of hidden areas. Written and directed by Yoshio Sakamoto and produced by Makoto Kano , with music by Kenji Yamamoto and Minako Hamano, the video game was released in Japan on March 19, 1994. Thanks to its advanced graphics, its distinctive gameplay, atmosphere and effective sound it was immediately welcomed, received numerous awards and it is still considered a Nintendo classic and one of the best video games ever made. Despite the great success at its release it received low sales in Japan, but achieved better results in North America and Europe, so much so that it was later distributed also for the Wii, Wii U and New Nintendo 3DS consoles. The game is also included in all versions of the Nintendo Classic Mini: Super Nintendo Entertainment System. The game was among the first to be included in the Nintendo Switch Online SNES library. On the occasion of the 20th anniversary of the game's release, a special exhibition was held in the Regenstein Library of the University of Chicago in 2014.

After stopping Mother Brain's plan, long ago, to use the dangerous Metroids as a bioweapon on Zebes, bounty hunter Samus Aran was tasked with heading to planet SR-388, the homeworld of the Metroids, to exterminate them. However, the last remaining Metroid larva, which by imprinting considered Samus as a mother, was spared by Samus and adopted her. Then, he handed it over to some scientists at the Ceres space laboratory, so that they could examine it and study it for the good of the galaxy. However, shortly after leaving Ceres, Samus receives an SOS from the lab. Back on the scene, she finds the entire laboratory destroyed and the members of the research crew dead; She investigates her and runs into her old enemy Ridley, but she can't stop her from escaping taking with her the capsule with little Metroid inside. The space colony goes into "self-destruct" mode and the Slayer is forced to flee. Ridley brings the Metroid to the planet Zebes, the last remaining headquarters of the Space Pirates which, after the events of Mission Zero, had been repaired and with it also the generals Kraid and the leader Brain Mother, who has proposed to return to their original plan and clone the latest Metroid. Back on Zebes and understanding the Pirates' plan, Samus discovers that, like last time, in order to reach Mother Brain, she must first get rid of the Pirate generals, now composed of Ridley, Kraid, and two new generals: Phantoon, a specter who infested an abandoned shuttle, and Draygon, a sea monster. During her adventure, as well as finding other upgrades for her armor protected by the Chozo statues, Samus also encounters four creatu