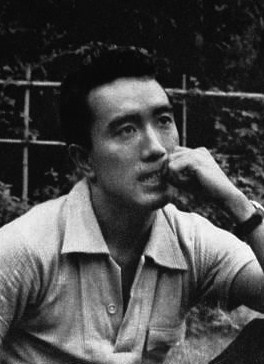 Yukio Mishima (三島 由 紀 夫 Mishima Yukio?), Pseudonym of Kimitake Hiraoka (平 岡 公 威 Hiraoka Kimitake ?; Tokyo, January 14, 1925 - Tokyo, November 25, 1970), was a Japanese writer, playwright, essayist and poet. A keen nationalist, he also had notoriety as an actor, film director and martial artist. Mishima was one of the few Japanese authors to enjoy immediate success abroad as well. His numerous works ranged from novel to modernized and readapted forms of traditional Japanese theater Kabuki and Nō, the latter revisited in a modern key. His ritual suicide after the occupation of the Ministry of Defense, together with a group of paramilitaries led by him, had a wide notoriety characterizing the character of Mishima in the imagination of literature.

Yukio Mishima, aka Kimitake Hiraoka, was born in Tōkyō on January 14, 1925 in the house of his paternal grandparents, Jotarō Hiraoka and his wife Natsuko. Together with the grandparents lived together the parents of Kimitake, Azusa and Shizue. The grandmother, returning from an unhappy marriage, decides to take full responsibility for her education, pouring an obsessive affection on little Kimitake: by usurping the role of the mother just over a month after birth, she will become a very important figure in the development of character. of the young Mishima, not only as regards the psychological aspects but also because it will bring him closer to classical literature and the forms of the Noh and Kabuki theater. four hours and for a very short time, necessary for breastfeeding. She was never allowed to leave the house. The child will escape the influence of his grandmother, now increasingly weaker, in 1934, when her mother with a subterfuge of her managed to steal it from him. These and other childhood and adolescent experiences are reported in the 1949 novel Confessions of a mask, an in-depth self-analysis of his life up to that moment, in which themes and arguments are already found that will be present throughout the production of author. From 1931 he had undertaken his studies at Gakushūin, the school of Peers, under the pressure of his grandmother. The pupils of this school were not necessarily part of the aristocracy, even if those who were not were considered an "outsider". With a Spartan type of education, students were encouraged to become soldiers rather than poets, but Mishima takes part in the activities of the literary club and some of his poems are published in the school's magazine. He begins writing his first prose work of a certain importance, Hanazakari no Mori (The Blossoming Forest): completed in 1941, it is heavily influenced by the Japanese romantic school (Nihon romanha). The classical style will cause him to be noticed by the Gakushūin literature professor, Shimizu Fumio, a member of the romantic school. It will be he who will have the story published in Bungei Bunka magazine, and on this occasion the pseudonym "Mishima Yukio" is chosen. In 1944, Hanazakari no Mori will be published in book form along with other short stories: his success will make the writer's name known to the public for the first time. . He will not only graduate, but will win a competition for a highly coveted post as a government official at the Ministry of Finance. While working at the Ministry, he lives a sort of "double life": a civil servant until the evening and a writer at night, sleeping no more than three or four hours. The situation soon becomes unbearable: he slips for exhaustion on the platforms of the Shibuya station and, in agreement with his father, resigns from the Ministry to devote himself exclusively to writing.

INSERT INTO `wiki_article`(`id`, `article_id`, `title`, `article`, `img_url`) VALUES ('NULL()','Yukio_Mishima','Yukio Mishima','The situation soon becomes unbearable: he slips for exhaustion on the platforms of the Shibuya station and, in agreement with his father, resigns from the Ministry to devote himself exclusively to writing.','https://upload.wikimedia.org/wikipedia/commons/e/ee/Yukio_Mishima_2.jpg')