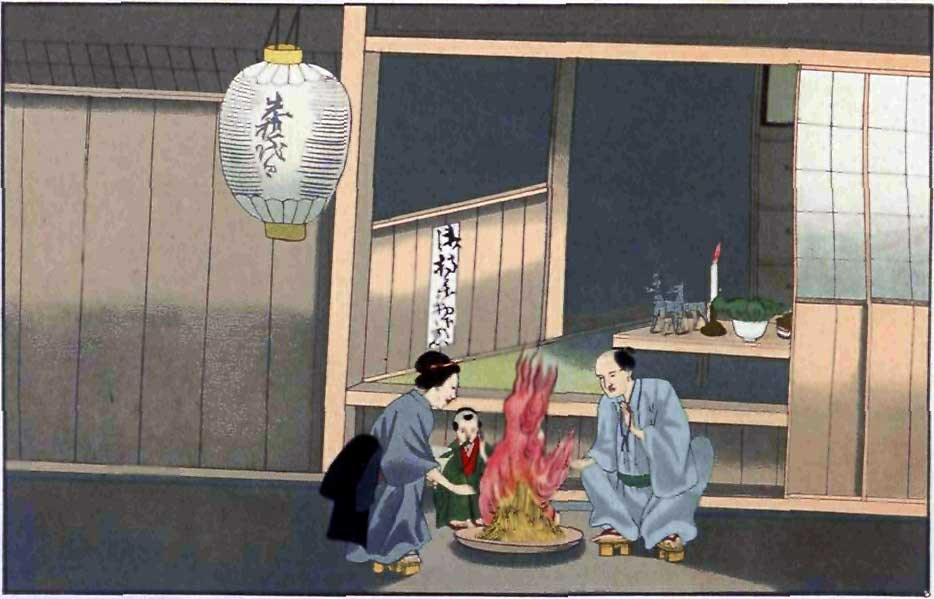 It is called 'Bon' (generally 'Obon') as an abbreviation of 'Uranbon-e' in Buddhism. As the word "bon" originally meant a container for offerings to spirits, it became the name of the spirits to whom the offerings were made and enshrined, and there is a theory that it was confused with urabon and coinciding with it. Even now, there are areas where the spirit is called 'bonsama'. In Chinese culture, mainly in Taoism, there is a custom that the seventh month of the lunar calendar is the 'demon month'. The idea that the lid of hell opens on the first day of the seventh month of the lunar calendar and closes on the 15th day of the 7th lunar month is thought to be influenced by Taoism. In Taiwan, Hong Kong, and South China, the Chugen Festival is still celebrated as an ancestor worship event. The exact origin of the basin is unknown. Twice a year, on the day of the full moon in early spring and early autumn, there was an event in which the spirits of ancestors visited their descendants and interacted with them (a remnant of a year being divided into two years, the first half and the second half). There is a theory), but it is said that the event in early spring became a New Year's festival after emphasizing the divinity of the ancestral spirit as the god of the year, and the event in early autumn was combined with Urabon and became a Buddhist event. . It is believed that around the 8th century in Japan, the custom of holding memorial services for ancestors in the summer was established. In the "Japanese-Portuguese Dictionary" compiled by the Jesuits in the 1600s (Keicho era), there are entries for "bon" and "vrabon". According to them, it is explained that Bon is a festival held by Buddhists ("infidels" from the standpoint of missionaries) for the dead around the 14th and 15th of the seventh month of the lunar calendar. The form of the event differs depending on the region and the sect of Buddhism. Also, during the Obon period, Jizo Bosatsu's puja is called 'Jizo Bon,' and the heavenly path, or Dainichi Nyorai's Obon, is called 'Dainichi Bon.' Obon is often used as an idiom in conjunction with the year-end and New Year holidays. Typical examples are words that refer to the season, such as ``bonkure,'' and parables (idioms) of ``being very busy'' or ``being happy at the same time,'' such as ``it seems that Bon and the New Year have come together. is.

It was traditionally celebrated on the day of Chugensetsu, the 15th day of the seventh month of the lunar calendar. However, Japan adopted the Gregorian calendar (new calendar/solar calendar) from January 1, 1873. The Dajokan's proclamation of the calendar change made it a principle to hold Bon on July 15 of the new calendar, but traditionally, many annual events in Japan were based on the old calendar, so the adoption of the new calendar for some annual events changed the season. Something happened that didn't fit. Especially in areas where July 15th of the Gregorian calendar is the busy season for farming, there was a serious problem, so the timing of Obon differs depending on the region, and many regions set August 15th of the Gregorian calendar as Obon. Nationwide, Obon is often held on one of the following occasions. July 15th of the lunar calendar (Lunar Bon) Okinawa, Amami region, etc. According to the lunar calendar, the date of Obon changes every year, sometimes moving to September. July 15th of the Gregorian Calendar (or Saturdays and Sundays before and after) In large cities such as Tokyo and some cities in the Tohoku and Hokuriku regions that do not overlap with the busy farming season, it is July 15 of the new calendar. It is also called Tokyo Bon. Hakodate,