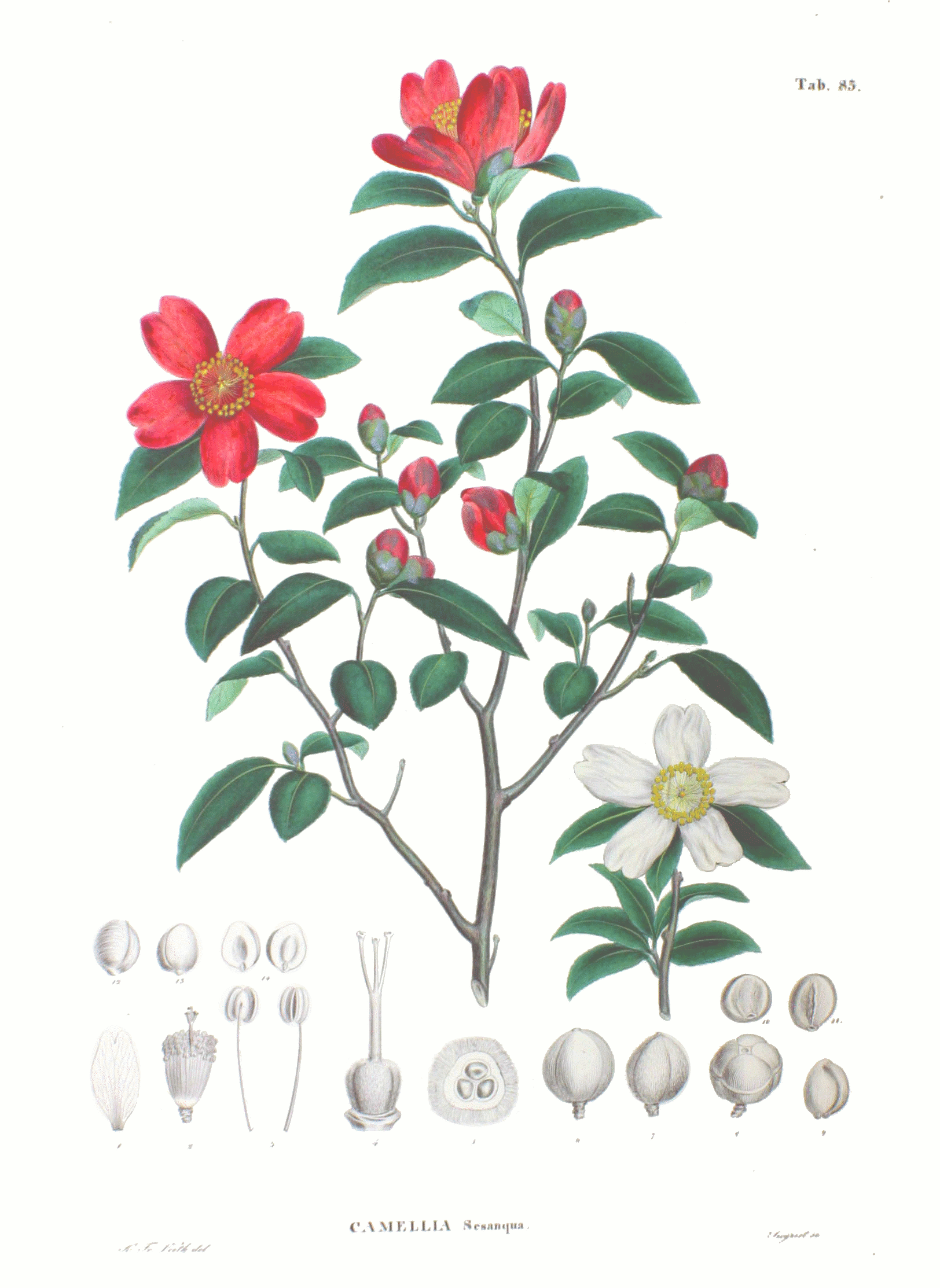 Sasanqua (Camellia sasanqua, scientific name: Camellia sasanqua) is an evergreen broad-leaved tree belonging to the genus Camellia of the Theaceae family. Also known as Okinawa Sasanqua. It is also well known for appearing in the lyrics of the nursery rhyme "Takibi". It is also a tree in the city of Kobe. The Chinese character notation of Yamachahana is derived from Yamacha, which refers to camellia in general in Chinese, and the name of Sasanqua is said to have been sung by "Sasanqua," which is the original reading of Sasanqua. Originally I said "Sanzaka", but the current reading with metathesis has taken root. General flower language "overcoming difficulties" "single-mindedness" Red flower "modesty" "you are the most beautiful" White flowers "Adorable" "You reject my love" Pink flower "eternal love"

A small tree of evergreen broad-leaved trees. The bark is light taupe and the surface is smooth. The annual branches are initially magenta and hairy. The leaves are oval with serrations about 2-5 cm in length, smaller than camellia, slightly thicker and shiny, and alternate. The flowering season is the cold season (October-December) from the end of autumn to the beginning of winter, and five petals bloom. In the wild native species, the flower color is white with a partial pale pink color, while the flower color of the cultivars to be planted varies from red to white to pink. Since the petals are scattered one by one, it can be distinguished from camellia. After the flowers bloom, spherical fruits with a diameter of about 2 cm are produced. Short hairs grow on the surface of the fruit, and in the fall of the year following flowering, the epidermis splits into three, and 2-3 dark brown seeds emerge from the inside. The winter buds are at the base of the leaves, and the flower buds and leaf buds are similar to camellia but small overall. The flower buds are broad-oval and have white hair, which can be seen around summer. The leaf buds are rather flat, long-ovate, hairy, and wrapped in 5-7 bud scales. Sasanqua has a strong image of being cold-resistant, such as being used as a winter season word, but the original Sasanqua is due to the fact that flowers fall when exposed to cold air during the flowering season, and that warm areas such as Shikoku and Kyushu are the northern limit. It is not particularly resistant to the cold. Many cultivars with improved varieties are resistant to the cold and bloom even in the middle of winter. . . . . . . . The tea tussock moth, which eats the leaves of Theaceae such as Sasanqua, camellia, and tea plant, is known. The urticating hairs, larvae, cocoons, and adults of this poisonous moth have urticating hairs that cause dermatitis when touched. In addition, even if you do not touch it directly, you may get injured by touching the urticating hair even if you pass under a tree or just downwind.

It is distributed in Yamaguchi Prefecture, Japan, from southwestern Shikoku to central and southern Kyushu, Nansei Islands (from Yakushima to Iriomote Island), and outside Japan, in Taiwan, China, Indonesia, etc. In addition to growing naturally in the mountains, it is also planted by hand and is often seen in the garden. Theaceae plants grow naturally from the tropics to the subtropics, and camellia, sasanqua, and tea are rare species adapted to the temperate zone, and Japan is the northern limit of its own habitat.

Along with camellia, it is a typical flowering tree from winter to early spring, and it is popular as a garden tree and there are many horticultural species, and it is often used for hedges. Oil can be obtained from the seeds.