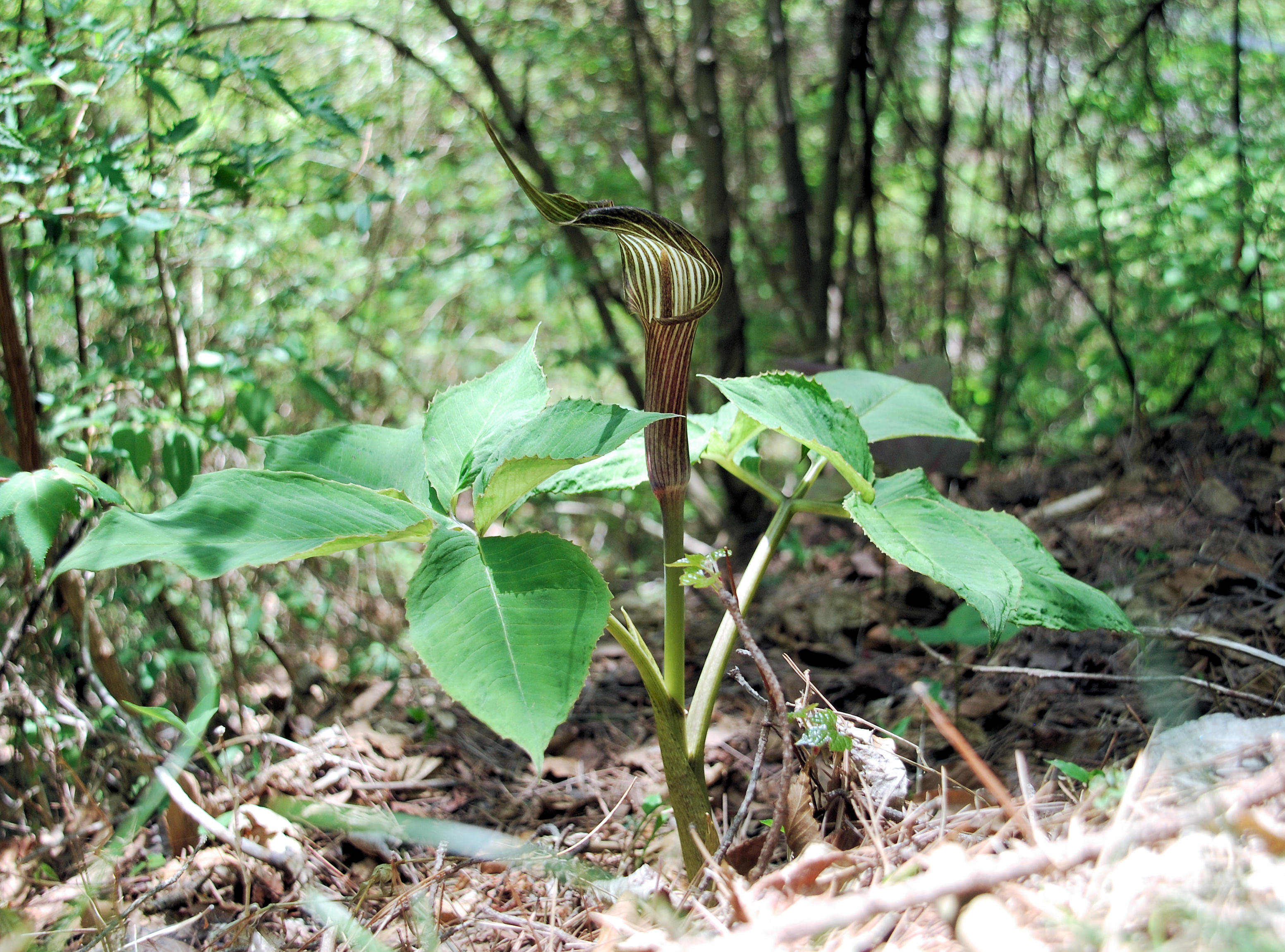 The genus Tennansho (scientific name: Arisaema Mart.) Is one of the genera belonging to the Araceae family. Some are toxic. Tennansho means "Tennansei" and is the name of this kind of corm Chinese herbal medicine. Species of this genus are found in moist tropics and temperate zones, and are distributed in East Asia, Southeast Asia, southwestern India, the eastern United States, Mexico, and eastern Africa. There are about 180 species in the world, and 53 species, 8 subspecies and 3 varieties are recognized in Japan. Detailed classification is difficult, and the scientific name may change even now. In English, there are other names such as Cobra lily and Jack-in-the-Pulpit.

It is a perennial and has bulbs (corms / tubers). The leaves are compound leaves with 1-2 leaves, and the base of the petiole becomes a leaf sheath and overlaps in a tubular shape, and it looks like a stem at first glance, so it is called a pseudo-stem. Depending on the species, 3 to 20 leaflets are formed in the shape of a toe or palm. Extend the peduncle on the pseudostem and attach the Buddhist bract. Whether the Buddhist bracts grow higher or lower than the leaves depends on the species. Among the species distributed in Japan, it is dioecious except for Maidurtennansho, but it is known that sex change depends on nutritional status. Takenoshin Nakai (1936) named this dioecious. The flowers that bloom in spring have the inflorescences and bracts that are characteristic of the Araceae family, but the shape of the bracts is characteristic and there are various things, and the purple bracts that bloom in the shade of the forest are eerie. Some of them give a good impression. Many of these Buddhist bracts go around the inflorescences of the ears and form a trumpet. The upper part of the inflorescence is inflorescence of various shapes, and the lower end of the inflorescence is skirt-shaped to form a narrow gap with the inner surface of the Buddhist bract. In the part where the inflorescence is attached, there is a gap between it and the Buddhist bract, forming a room that is blocked at the bottom of the appendage. Small insects such as Mycetophilidae and Phoridae are attracted to this flower by the odor emitted by the inflorescence appendage, and it passes through the gap between the appendage and the Buddhist bract and is trapped in the room around the flower. In male flowers, pollen from the stamens collects in the lower part of this room, and the trapped small insects are covered with pollen. There is a small hole-shaped gap at the lower end of the seam of the male flower's Buddhist bract, and small insects with pollen escape from here. Pollination is established when the pollen-bearing mosquito enters the female flower's Buddhist bract and reaches the female inflorescence. However, because the female flowers do not have the small pore-shaped gaps in the male flowers, the trapped small insects cannot go out and eventually die. If you look into the female flower Buddhist bract from above, you may see dead small insects. In the fall, the Buddhist bracts wither and ripe vermilion and red fruits become prominent. The fruits are berries that gather around the axis like corn and are red and have 0 to several seeds. Seed dispersal is done by being eaten by birds or by lying down on the spot.

The cells of the bulb stem are toxic with acicular crystals of calcium oxalate, and if eaten as they are, the mouth hurts and swells, but because they contain a lot of nutrients such as starch, Ainu, the Izu Islands, and the terrestrial forest in the eastern Himalayan The belt has been devised to be edible while avoiding the irritation of calcium oxalate. For example, in the Ainu food culture, the poisonous yellow part on the upper part of the bulb of Arisaema negishii is removed and steamed or steamed in the ash of a furnace to reduce the irritation and make it edible. In the olden days, the ball stalk of Arisaema negishii was boiled and attached like a rice cake, and the dumpling was swallowed as much as possible without chewing and stabbed.