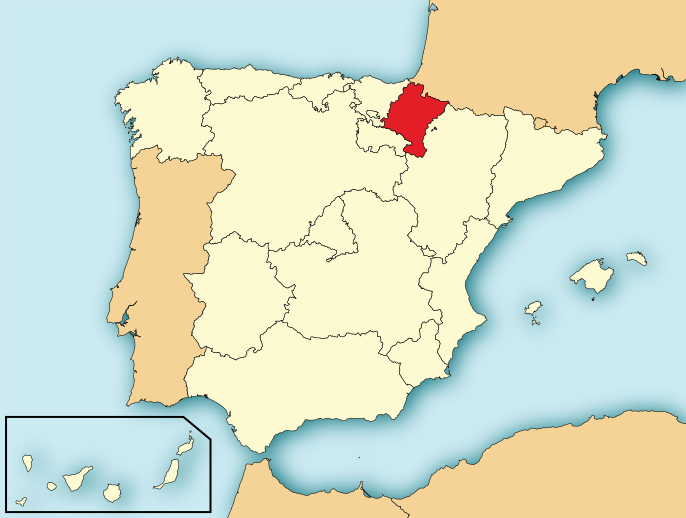 Navarra (Navarra, Spanish: Navarra) or Nafarroa (Nafarroa, Basque: Nafarroa) is an autonomous region of Spain. It is an autonomous state of one prefecture and one state, and is composed of Navarre prefecture alone. The state capital is Pamplona. In Spanish, the second syllable is accented, so it is also written as Navarra. The Kingdom of Navarre existed in this medieval region, and even after being annexed by the Spanish Empire, it gained a certain degree of autonomy as a viceroyalty. Although historically part of the Basque Country, it did not want to join the Basque Country during the transition to civilian rule (1975-1982) after the Franco regime, and in 1982 Navarre was established by Navarre alone. Due to its historical background, it has a great deal of autonomy, and of the 17 autonomous regions of Spain, only Navarre and Basque are granted tax autonomy. In addition to Spanish, the official language of the country, Basque, the regional language, is also designated as the official language in some areas.

It borders the Basque Country's Alava and Gipuzkoa provinces to the northwest, La Rioja to the south, Aragon to the east, and 163 km to the northeast with France. From the Pyrenees in the north to the plains of the Ebro River in the south, the geography of Navarre is volatile, and geographer Alfredo Florista described the landscape of Navarre as a "miniature continent." From the perspective of topography and bioclimatology, Navarre can be divided into three regions: mountainous, central and riverbank. The mountainous area occupies the northern part of Navarre and is divided into subregions, the wetlands, the Pyrenees valley, and the Pyrenees leading edge basin. The wetlands of the northwestern part of the state have an average temperature of 15 degrees Celsius, annual rainfall of about 1,400 mm, and vegetation such as broad-leaved trees, pastures, and ferns. The Pyrenees valley in the northeastern part of the state changes from the foothills of the Pyrenees, which are characterized by heavy snowfall and temperature changes, to a submarine climate, which is characterized by a warmer climate toward the west. Beech, fir, and Japanese red pine can be found in the northern part of the Pyrenees. Vegetation in the Pyrenees leading edge basin is conspicuous with oaks and oaks and other Mediterranean broad-leaved trees. The highest peak in Navarre is Mesa de los Tres Leges at an altitude of 2,428 m, and around Torres Leges are the Ani peak at an altitude of 2,507 m (the summit is French territory) and Petrecema at an altitude of 2,366 m. There is a central part between the mountainous part and the riverbank part, and it gradually changes from the northern part where mountains and hills are seen to the southern part where a vast plain spreads. The climate changes significantly even in the central part, with a continental climate on the east, a marine west coast climate on the north, and a continental Mediterranean climate on the south. In the center is Pamplona and the Pamplona metropolitan area. The banks of the river are the main and tributary basins of the Ebro River, and there are two major cities, Estella and Tudela. On the banks of the Estella, you can see gentle ridges and valleys on the slopes.