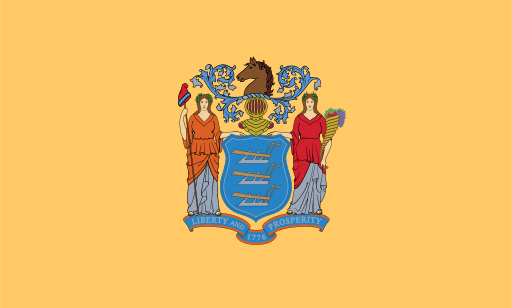 new jersey State of New Jersey State Nickname: The Garden State State Motto: Liberty and prosperity New Jersey (British: State of New Jersey) is a state on the Atlantic coast of the eastern United States. The state borders New York on the Hudson River to the northeast, Pennsylvania to the west, and Delaware to the southwest across the Delaware Bay. To the southeast and south it faces the Atlantic Ocean. Among the 50 states in the United States, it is 47th in land area, 11th in population, and 1st in population density. It ranked second in terms of median household income in 2011. The state capital is Trenton and the largest city is Newark. Neighboring New York to the northeast and Philadelphia to the southwest, it has long developed as a corridor connecting the two cities, a suburban city, and a casual resort area. Notable satellite cities include Jersey City and Newark on the New York side, and Camden and Trenton on the Philadelphia side. Among them, Atlantic City is famous as the East Coast's premier casino city. It was one of the first thirteen states to gain independence from the United Kingdom, and is named after the island of Jersey, one of the Channel Islands in the English Channel.

During the Jurassic period, about 180 million years ago, the area that became New Jersey bordered North Africa. The pressure from the collision of the North American and African plates raised the Appalachian Mountains. Glaciers reached New Jersey during the Ice Age about 18,000 years ago. As the glacier retreated, it left behind Lake Passaic and many rivers, wetlands, and canyons. The area was first settled by American Indians, and by the time Europeans arrived it was ruled by the Leni-Lenape tribe. The Lenape were a loosely organized group of small-scale farmers, mainly corn, who sought to expand a mobile hunter-gatherer society in the areas surrounding the Delaware River, lower Hudson River, and western Long Island Sound. . Lenape society was divided into matrilineal groups based on common matrilineal ancestry. These groups were organized into three tribes identified by animal signs such as turtles and wolves. It had encounters with the Dutch in the early 17th century, and its European relations were primarily through the fur trade.

The Dutch were the first to claim land in New Jersey. The New Netherland colony consisted of what is now part of the Mid-Atlantic Province. The idea of ​​European sovereignty over land was not accepted by the Lenape, but the policy of the Dutch West India Company called for colonists to purchase land for settlement. The first was Michael Poe, who became Lord of Pavonia along the North River, later called Bergen. Peter Minuit purchased land along the Delaware River and founded the Colony of New Sweden. In 1664, all of them became part of England. In the same year, an English fleet under the command of Colonel Richard Nichols of England entered what is now New York harbor, captured Fort Amsterdam and annexed the whole area to English possession. During the English Civil War, Jersey, the Channel Islands, remained loyal to the British Crown and sheltered the King. King Charles I executed