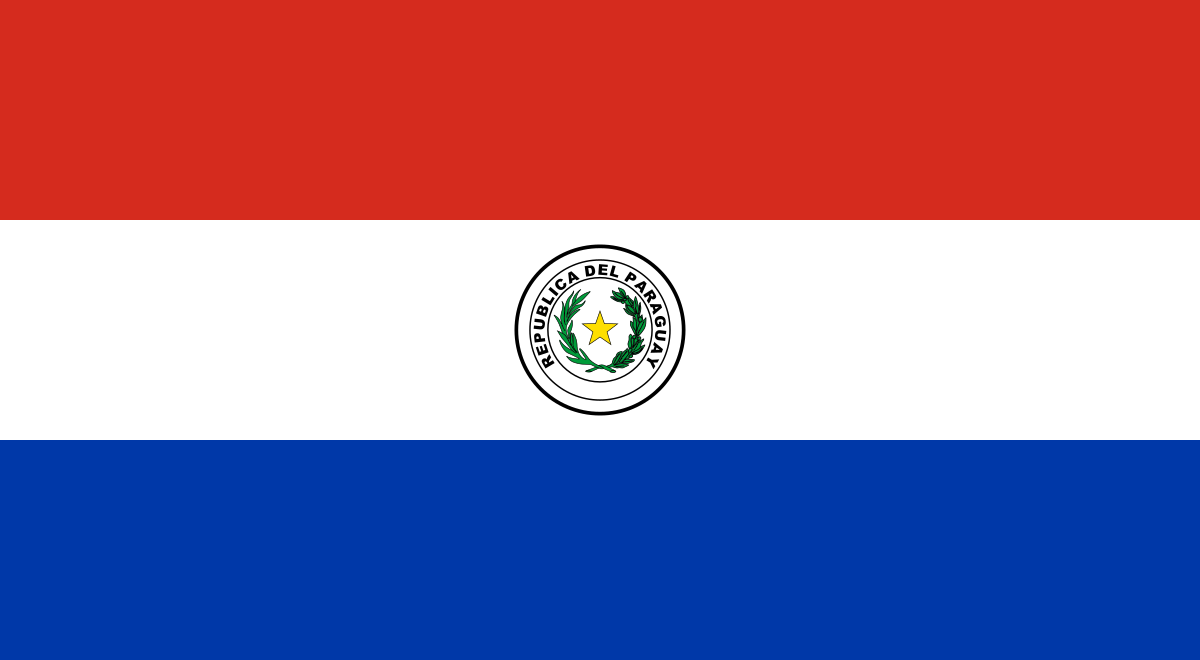 Republic of Paraguay República del Paraguay (Spanish) Tetã Paraguái (Guarani) National slogan: Paz y justicia (Spanish: Peace and Justice) National Anthem: Paraguayos, República o Muerte (Spanish) Paraguayans, Republic or Death The Republic of Paraguay (Spanish: República del Paraguay, Guarani: Tetã Paraguái), commonly known as Paraguay, is a republican nation located in the south central part of South America. It is a landlocked country surrounded by Brazil in the east and northeast, Bolivia in the west and northwest, and Argentina in the south and southwest. The capital is Asuncion. The Paraguayan flag has a different design on the front and back (see Paraguay flag).

The official name is República del Paraguay in Spanish. Known as Paraguay [paɾaˈɣwai]. The Guarani notation is Tetã Paraguái. Known as Paraguái [paɾaˈɰwaj]. The official English notation is Republic of Paraguay [ˈpærəɡwaɪ]. The Japanese notation is the Republic of Paraguay. The official katakana notation used by the embassy in Japan is Paraguay. In Japan, it is usually written as Paraguay, Paraguay, etc., and in Chinese characters, it is called Tomoe or Tomoe. The predominant theory is that Paraguay was originally a Guarani word meaning "from a big river." The big river is the Parana River. Another theory is that it means "people wearing bird crowns."

Originally, Guarani and other Tupi-Guarani Indigena groups lived in this area. The authority of the Tawantinsuyu (Inca Empire) did not extend to this area, so many people lived in a primitive community. However, since the beginning of the 16th century, Sebastian Cabot and other Europeans have come to this area up the Rio de la Plata.

When Asuncion was built in 1537 by an expedition from Buen Ayre, it became Spanish territory. This construction was to find a "silver mountain" that seemed to exist as a land route from the Rio de la Plata to Upper Peru, and was the result of an expedition to build a fortress against the expansion of Portugal's territory. Unlike the hunting Indigenas of the La Plata region, such as the Charruans, the Guarani, who were cultivated, albeit crudely, are highly cultural and with other Indigenas who were hostile to the Spaniards. The Spaniards decided to confront, and the Spaniards accepted it, creating an exchange between the two, and a mixed race (Mestiso) also emerged. In 1617, the governor-general centered on Asuncion was separated from the governor-general La Plata centered on Buenos Aires and the governor-general Tucuman centered on San Miguel de Tucuman. Since the 17th century, Jesuit missionaries have been actively engaged in missionary activities to indigenous peoples, including agricultural activities. Most of the remains of the Jesuit missionary school that still remain today were built at this time. The Jesuits armed the Guarani people for resistance to a slave merchant called Bandeirantes (Portuguese: Bandeirantes) from São Paulo, Brazil. Many Guarani people are enslaved by Portuguese slave merchants.