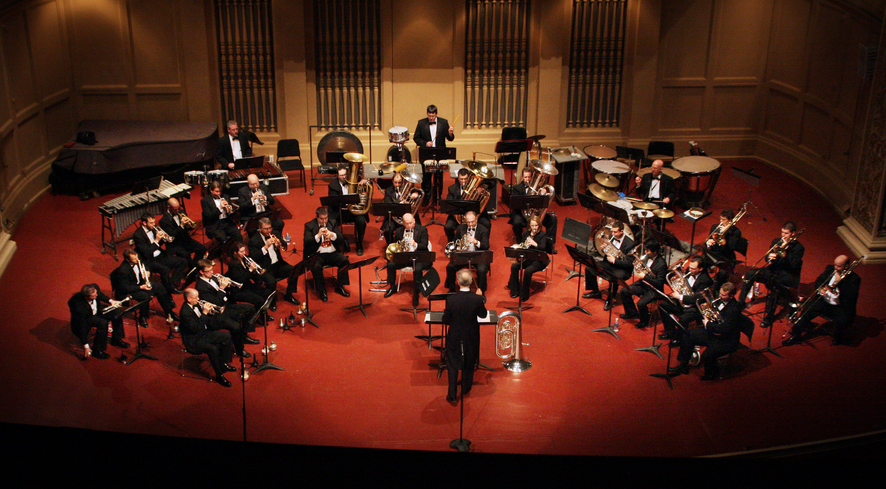 A brass band (or brass band, brass band, trumpet corps, English: brass band) is an orchestra organized mainly by brass instruments in a narrow sense. Unlike brass bands, brass bands are generally composed of brass and percussion instruments, and usually do not include woodwind or string instruments. Brass is the English name for brass, which is the main material for brass instruments. In Japan, the German blas refers to the so-called brass band, especially the amateur brass band such as schools, workplaces or civic groups, as a general recognition and usage, and is called "brass band" along the stem of "blowing". On the other hand, there are cases where the name of a pure brass band organization claims to be a brass band. In England, where brass bands are popular, brass band is clearly distinguished as a wind band. In addition, it is used when referring to the following orchestras. British brass band 19th century American brass band New Orleans Black Community Orchestra (brass band) German private brass band (Blasband) Private orchestra indigenous to each colony by Western military bands Orchestras centered on other brass instruments In this section, we mainly describe the "brass band" in Japan, and briefly describe other orchestras, but we will leave the details to brass band or independent items.

In Western languages, the use of "Brass band" can be seen from the Meiji era, and the use of the word "brass band" can be seen from the Taisho era. In 1924 (Taisho 13), supervised by Takashi Iba, "White Eye Music Dictionary" (White Eye Publishing Co., Ltd.) described "brass band" as "Brass instrument music corps. A group of musicians playing brass instruments. Originally including reed instruments. It is distinguished from the whole army orchestra, "he said, pointing out that the brass band refers to a band with only brass instruments, and at the same time, there is a statement that the general usage of brass band is becoming established. .. From the early Showa period, newspapers began to see examples of the Salvation Army and the support band in the Waseda-Keio match being called brass bands. From around the time of the Manchurian Incident, the number of amateur brass bands began to increase in workplaces, schools, youth groups, etc., and it became popular to refer to these orchestras as "brass bands". In particular, the first issue of the magazine "Quarterly Brass Band" (Wind Instrument Study Group) in 1933 (Showa 8), the formation of the "Amateur Brass Band Tokai Federation" in 1934 (Showa 9), and Tsunemitsu Yamaguchi in 1934. The publication of "Brass Band Textbook" (Kanraku Kenkyukai) and the use of the expression "brass band" in advertisements for Japanese wind instruments (merged with the current Yamaha in 1970) and Tanabe musical instruments helped spread the word. I think that the. In addition, Kyuichi Hirooka of Tokyo Prefectural Daiichi Commercial High School is a brass band for performances similar to military bands such as street marches, and a school orchestra that focuses on artistry and mainly performs on stage. Distinguished from the band. As the war intensified, the word "brass band" was used, such as in 1940 (Showa 15), the follow-up magazine "Brass Band: Brass Band / Brass Band News" was renamed to "Brass Band Monthly Report". I can't do it anymore. The organization of the brass band at that time in the advertisement for Japanese wind instruments published in the first issue of "Quarterly Brass Band" is as follows (to be exact, the number of people in the organization is Chinese numerals). 6-person --- clarinet, cornet, bar