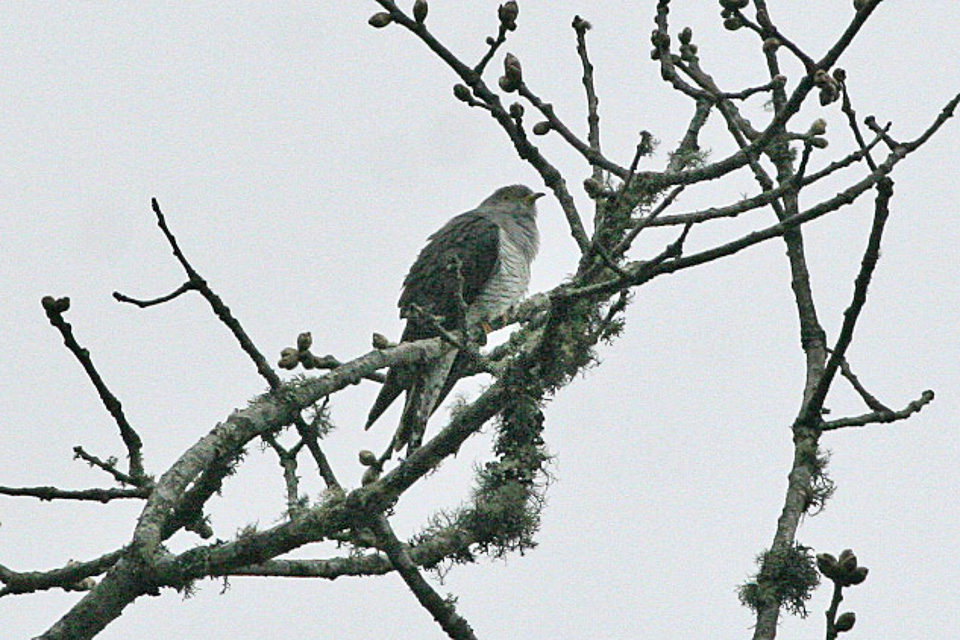 Lesser cuckoo (scientific name: Cuculus poliocephalus) is a type of bird that is classified in the order Cuculiformes and Cuculiformes. It is known for its characteristic crying and habit of brood parasites such as warblers. In Japan, it has appeared in various documents since ancient times, and there are many kanji notations and nicknames such as Toki, Tou, Shiki, Shiki, Tokitori, Shiki, and Tao. The season word indicates spring. ‥

The total length is about 28 cm, slightly larger than the bulbul and smaller than the pigeon. The head and back are gray, and the wings and tail feathers are dark brown. The chest and belly are white and have black horizontal stripes, which are thinner and thinner than cuckoos and himalayan cuckoos. There is a yellow eye ring around the eyes.

It is distributed from eastern Africa, Madagascar, India to southern China. Populations that overwinter from India to southern China will reach northern China, the Korean Peninsula, and Japan around May. It will come around mid-May in Japan. The reason why the birds arrive later than other migratory birds is that the breeding of the target bird starts due to the habit of brood parasites, and the eating habits prey on caterpillars. Because there is no such thing.

It comes to Japan as a summer bird north of Kyushu, but it is rare in Kyushu and Hokkaido. Like cuckoos, it is carnivorous and especially likes caterpillars. In addition, there is a habit of brood parasites such as Japanese bush warblers without raising children by themselves. The male's bark is a loud voice, and it sounds like "Kyokkyokyokyokyo!" And also "ho-to-...-to-gi-su". It often squeals early in the morning and sometimes at night. "Honzon Kaketaka", "Patent Permit Bureau", and "Teppen Kaketaka" are known as "Honzon Kaketaka" without hearing this cry.

Literature and art and lesser cuckoo

Of the other names for the lesser cuckoo, "Moriyu," "Shinjitsu," and "Fujuki" are based on Chinese stories and legends. In the Yangtze River basin, there is a tilted country called Shu (an old Shu that existed before Qin), and a man named Duyu appeared there, who instructed farming and revived Shu, and became the emperor and was called "Duyu". Later, he handed over the throne to a man who was good at controlling the flooding of the Yangtze River, and Duyu retired in the mountains. When Duyu died, his soul turned into a lesser cuckoo, and he told the people that it was time to start farming, so he said that the lesser cuckoo, the incarnation of Duyu, began to cry sharply. In addition, when he later learned that the 蜀 had been destroyed by Hata, the lesser cuckoo, the incarnation of Tou, mourned and spit blood while crying, "I don't want to go home. He said that he screamed until he spit blood, and that was the reason why the mouth of the lesser cuckoo was red.

In classical literature Japan, many Japanese poems of Kokin Wakashū have already been sung, with 153 cases in "Manyoshu", 42 cases in "Kokin Wakashū", and 46 cases in "Shin Kokin Wakashū". It is rare. It is often sung in combination with Tachibana and Unohana, which bloom at about the same time as the cry begins to be heard. If you look at the squealing direction of the Hototogisu, you can only see the moon of Ariake (Senzai Wakashū, Minister of the Left of Tokudaiji Temple). In the eyes, Aobayama Hototogisu Hatsune (Yamaguchi Sodo) is also prized as a bird that sings at night, and the cry of the lesser cuckoo that is heard for the first time in that year is called Shinobine, which is also prized. In "Pillow grass"