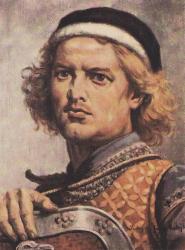 When his father died, he gained inheritance rights to the Principality of Sandomierz and was in the position of Grand Duke of Poland from 1194 to 1227, except for three decommissioning periods. However, his reign was volatile, with his uncle Mieszko III and his cousin Władyslaw III competing with Leszek I for the throne of the Grand Duke. His cousin, Mieszko I, Duchy of Opole, has also taken his place. Historical sources of Leszek I's reign from 1198 to 1211 are divided into claims about how and when Leszek I was deposed and reinstated in the battle for the throne of the monarch. The demise in 1210 was centered around the public turmoil of Mieszko I. In 1205, Reshek, along with his younger brother Konrad I of Masovia, defeated Grand Duke of Ruthenia in the Battle of Zawichost in Lesser Poland. In 1207, at the request of Pope Innocent III, he recognized Poland as the Pope's seal. This incident meant that the Polish state would join the papal camp in the long-running power struggle between the Pope and the Holy Roman Emperor in medieval Europe. After this, Leszek I formed a strong alliance with Archbishop Henrik Kyetrich of Gniezno, who was promoting the reform of the church by Pope Innocent III. Leszek I fought against Hungary over the eastern part of Galicia-Rusi (Luthenia) (the Principality of Galicia-Volini unification war), but could not influence the region. So Leszek the White decided to move into the region in collaboration with Hungary, marrying his daughter Salomea to Galic, the son of King Andrew II of Hungary, making him the monarch of Hungary, and the vassal of the King of Hungary. He decided that both Poland and Hungary would control the region using this master-slave relationship. However, the aim of Poland, where the son of the late Grand Duke Danuiro regained power in Halych (Galicia) in 1214 and tried to control the region, and the Roman Church, which tried to expand the Catholic power to the east, ended in failure. rice field. On November 24, 1227, Leszek I was assassinated while attending the Council of Liubech in Gonzava. It is believed that the assassination was ordered by Swietopelk II, Duke of Gdansk in East Pomerania, behind the scenes of Władyslaw Odonitz, Duke of Wielkopolska, brother-in-law of Swietopelk II and grandson of Mieszko III. It is said that he was pulling a thread. The incident is said to have been caused by Leszek I asking Sifientpeuk II to submit to his authority. A famous anecdote is that Leszek I declined the offer to join the Crusaders, telling the Pope that the Polish knights would not join the Crusaders because Palestine has neither mead nor beer.