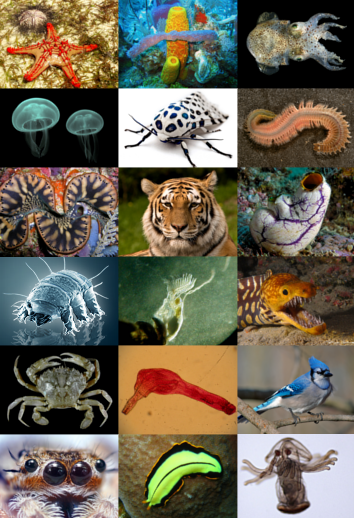 Animals (animals, Luo: animalia, English: animal) One of the taxa of organisms (especially eukaryotes) in biology. In the past, organisms were roughly divided into plants and animals according to their sensation and motor ability, but animals were divided by Heckel into multicellular metazoans and unicellular protozoa. In Whittaker's Five-Kingdom System, it is common to treat only this metazoan as the animal kingdom Animalia and treat it as an "animal". In everyday language, an animal is an animal with the meaning of 1. other than humans. In particular, it often refers to organisms that belong to mammals. In this section, the meaning of 1. is explained, and unless otherwise specified, it refers to metazoans. The study of dealing with animals is called zoology, and in addition to the biological aspects of animals, the relationship between animals and humans is targeted. See also this "zoology" for the history of animal research.

Animals are a phylogenetic group that includes a wide variety of organisms such as shellfish, insects, tapeworms, and kaimen, as well as vertebrates such as mammals, reptiles, birds, amphibians, and fish.

Based on the findings of molecular genetics at the end of the 20th century, organisms are divided into three categories: eubacteria, paleobacteria, and eukaryotes (three domain theory), of which animals are plants, fungi (mushrooms and molds), and protozoa. It belongs to eukaryotes. In addition, it was found that the protozoa (paramecium, euglena, amoeba, etc.), which are part of the protists, have different phylogenetic positions from the animals (metazoans) referred to in this section, and that they themselves are multi-strained. There is. In primary education, the classification of living things is explained based on the two-world theory (until 2011) or the five-world theory (after 2012) before the three-domain theory. "Animal" in the two-domain theory includes protozoa and does not reflect the findings of the three-domain theory. On the other hand, animals in the Five-Kingdom theory are basically the same as those in the three-domain theory, and protozoa are distinguished from animals as protists. It was Among eukaryotes, animals belong to a lineage group called Opisthokonta (Opisthokonta), which strongly supports monophyly, to which fungi and some eukaryotes belong in addition to animals. Organisms belonging to opisthokont have a shared trait of advancing with a single flagella on the back side, which is the flagella of animal sperm and chytrid spores. Opisthokont is put together with Amoebozoa in a clade called Amorphea. In addition, opisthokont has a clade called Holozoa and a clade called Holomycota. Animals belong to the former and fungi belong to the latter. The choanoflagellate, which is considered to be the origin of animals (described later), also belongs to Holozoa. As mentioned above, metazoans are often treated as the animal kingdom, but there are also attempts to regard this Holozoa as the animal kingdom. Also, in Adl et al. (2019), the metazoa Haeckel, 1874 emend. Adl et al., 2005 was given the regular rank and is synonymous with the animals Animalia Linnaeus, 1758 and the eumetazoa Eumetazoa Bütschli, 1910 (of metazoans). As a synonim), spongy animals, flat animals, spore animals, and combed animals are included, but the left-right symmetric animals excluding them are classified as the class corresponding to the world.

The scientific names of animals are operated according to the International Code of Zoological Nomenclature. The current Code is the 4th edition, which came into effect on January 1, 2000. In this nomenclature, the word "animal" refers to the metazoan shown in this section, but even if it is a protist, if it is treated as an animal (protozoa) by a researcher, it is referred to as "animal" in the nomenclature.