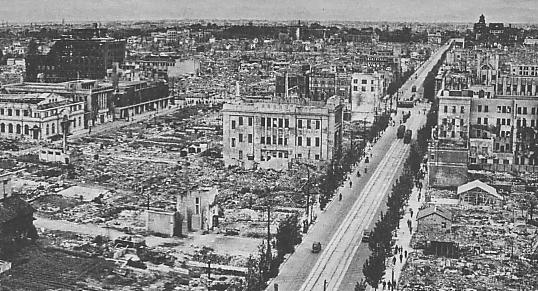 Nagoya University Air Raid (Nagoya Daikushu) is a general term for repeated air raids on Nagoya City by the U.S. Army at the end of World War II, or those that were carried out on a large scale, especially targeting urban areas. .. The latter refers to the air raids on March 12, 1945 (Showa 20), when the central city area was damaged, March 19, when Nagoya Station burned down, or May 14, when Nagoya Castle was burned down. The railroad was bombed.

Since there is no clear definition, all air raids on Nagoya are often collectively referred to as large air raids, and air raids on the suburbs of Nagoya such as those against Ichinomiya City and Handa City may be included for convenience. The air raids that took place around the Aichi Tokei Denki Funakata Factory and Aichi Kokuki Funakata Factory in Atsuta Ward on June 9, 1945 are called Atsuta Air Raids.

The Doolittle raid by the US Army Air Forces B-25 bomber was carried out on April 18, 1942, and the first air raid by two of the same bombers in Nagoya killed eight people and injured. 31 people were damaged. In July 1944 (Showa 19), the Mariana Islands such as Saipan were conquered by the US military, and this became the base for the subsequent air raids on Japan. On December 13, the same year, 90 B-29 bombers of the U.S. Army Air Force produced more than 40% of Japan's aviation engine production. The first full-scale air raid was carried out (near Mitsubishi Motors No. 4 Factory, current Nagoya Dome (Vantelin Dome Nagoya) and Daiko Medical Center, Nagoya University). Due to the weather and other factors, the bomb did not hit the factory as expected, and the US military relentlessly bombed the factory until April 7, 1945 (Showa 20), destroying the factory with seven bombings. The bomb that did not hit the factory landed on the surrounding private houses, and many civilians were involved and died. Also, on December 13th, at Higashiyama Zoo in Chikusa Ward, which was touted as "the best zoo in the Orient", a large number of beasts were slaughtered so as not to escape from the breeding facility destroyed by the bombing (wartime beast disposal). ). At Higashiyama Zoo, they refused to slaughter even after the beasts were slaughtered at other zoos, but they were slaughtered at the strong request of the Hunting Association, which cooperated with the security.

Initially, air raids were mainly carried out by precision bombing with conventional bombs on military-related factories and industrial facilities such as Nagoya Port by high-altitude strategic bombing during the day, but the results could not be achieved due to the low hit rate. Since Curtis Rumei became the commander of the 21st bombing group in January 1945, indiscriminate bombing of urban areas using incendiary bombs began, and many midnight air raids began around March. became. Before dawn on March 12, 200 B-29 bombers carried out a large-scale air raid on the city of Nagoya, affecting 105,093 people. It is said that 519 people were killed and 734 were injured, 25,734 houses were damaged, and 5% of the city was burned down. Around 2:00 am on March 19, a large-scale air raid on the city of Nagoya by 230 B-29 bombers affected 151,332 people. There were 826 dead and 2,728 injured, and 39,893 houses were damaged. The city centers such as Naka-ku, Nakamura-ku, and Higashi-ku became burnt fields, and it is said that the burnt appearance of the 6-story Nagoya Station, which was just completed in 1937 (Showa 12), could be seen well from a distance. On May 14, an air raid by 440 B-29 bombers burned Nagoya Castle, a former national treasure, and damaged 21,905 houses. 66,585 people were affected, 338 dead and 783 injured, but have been shot since then.