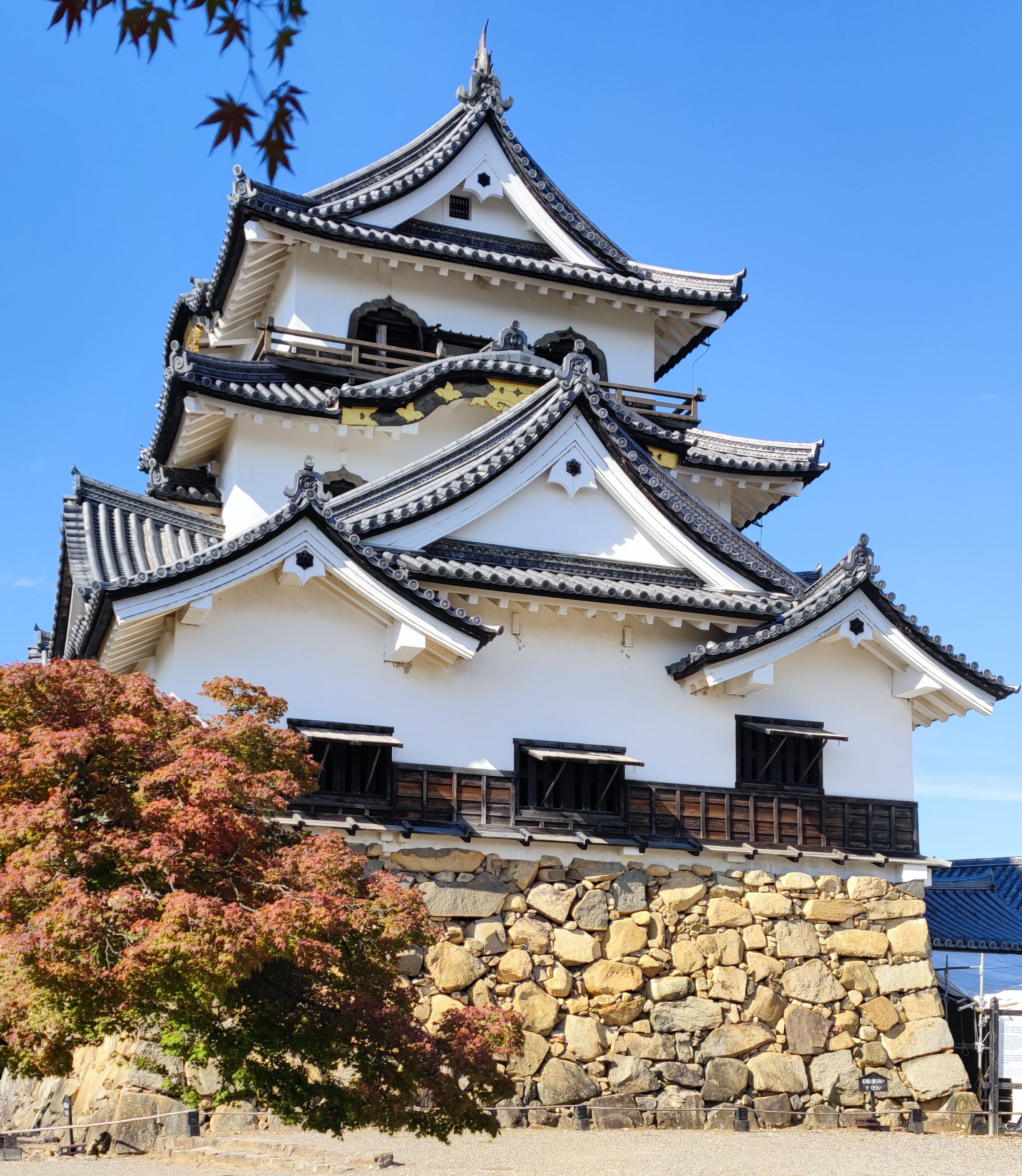 Hikone Castle is a castle located in Hikone, Inukami District, Omi Province (currently Konkicho, Hikone City, Shiga Prefecture). During the Edo period, the government office of the Hikone Domain was established. The castle tower, Tsukeyagura and Tamon turrets are national treasures, and the castle ruins are special historic sites and Lake Biwa Quasi-National Park Type 1 special area. The castle tower is one of the five castles designated as national treasures (the others are Inuyama Castle, Matsumoto Castle, Himeji Castle, and Matsue Castle).

Hirayama Castle (elevation 50m) was built in the early Edo period on Mt. Hikone in Konki-cho, Hikone City, Shiga Prefecture, as the base of Mr. Ii, who is in charge of Zhenxi. The mountain is also known as Konkijo because it has the nickname of Konkiyama. It was the residence of Mr. Ii, the 14th generation of Fudai Daimyo, who produced many elders. The castle tower still exists, avoiding the destruction caused by the abolition of the castle in the early Meiji era. Two buildings, the castle tower, the Tsukiyagura, and the Tamonyagura, have been designated as national treasures, and five buildings, including the turrets and gates from the Azuchi-Momoyama period to the Edo period, have become important cultural properties of the country. It is specified. Among them, stables are rare nationwide as designated as important cultural properties. According to one theory, the building was preserved in 1878 (Meiji 11) by the performance of Shigenobu Okuma. The castle tower is counted as one of the five castles designated as a national treasure. It is a castle that often retains the remains along with Himeji Castle, and although it was listed on the provisional list of World Heritage Sites in Japan in 1992, the recommendation has been postponed for more than 20 years due to the stricter registration of World Heritage Sites in recent years. There is. Many castles in Shiga Prefecture were dismantled by the abolition of the castle in the Meiji era, and Hikone Castle is the only preserved example (see History and History).

Naomasa Ii, one of the four Tokugawa Tennos, was sealed in the northeastern part of Omi Province with 180,000 stones after the Battle of Sekigahara in 1600 (Keicho 5), and was the residence of Mitsunari Ishida, the commander of the Western Army. I entered Sawayama Castle. Sawayama Castle was a famous castle that was said to be "there are two things that are just Sansei, and the castle of Sawayama on the left side of the island." He said he hated it. For this reason, he planned to move his residence to Isoyama (currently Iso, Maibara City) near the shore of Lake Biwa, but he died in 1602 (Keicho 7) because the war wounds in Sekigahara did not heal. Since Naomasa Ii, who succeeded the family, was a child, Morikatsu Kimata, a retainer of Naomasa, consulted with Ieyasu Tokugawa and inherited Naomasa's wishes. , Kanegameyama) started the construction of Hikone Castle. The castle was built by three official magistrates, and 12 daimyo (including 15 daimyo) from seven countries, including the Owari and Echizen clan, were ordered to help. Construction work was completed up to the second phase in 1606 (Keicho 11), and the direct successor entered the castle around the same time as the castle tower was completed in the same year. After the destruction of Toyotomi in the summer camp of Osaka, the third phase of construction was started by the Hikone Domain alone in 1616 (2nd year of Genna). At this time, the palace was built, and in 1622 (Genna 8), all construction work was completed, and Hikone Castle was completed. After that, Mr. Ii continued to increase, and in 1633 (Kanei 10), he obtained 350,000 stones, which is the highest among the Fudai Daimyo under the Tokugawa Shogunate. In addition, when building Hikone Castle, it is said that Otsu Castle, Sawayama Castle and other castles in Omi Province were relocated or destroyed and used for the construction of the castle. As a result, only Hikone Castle remains in the Hikone Domain, and Mr. Ii, the head of the Fudai daimyō, who is also the elder, set an example for the daimyo to keep the one-country-one-castle decree. The chief retainer, the Kimata family, occupied 10,000 stones, but because he did not have a camp, he was working at the Nishimaru Mie turret on the 20th of the month.