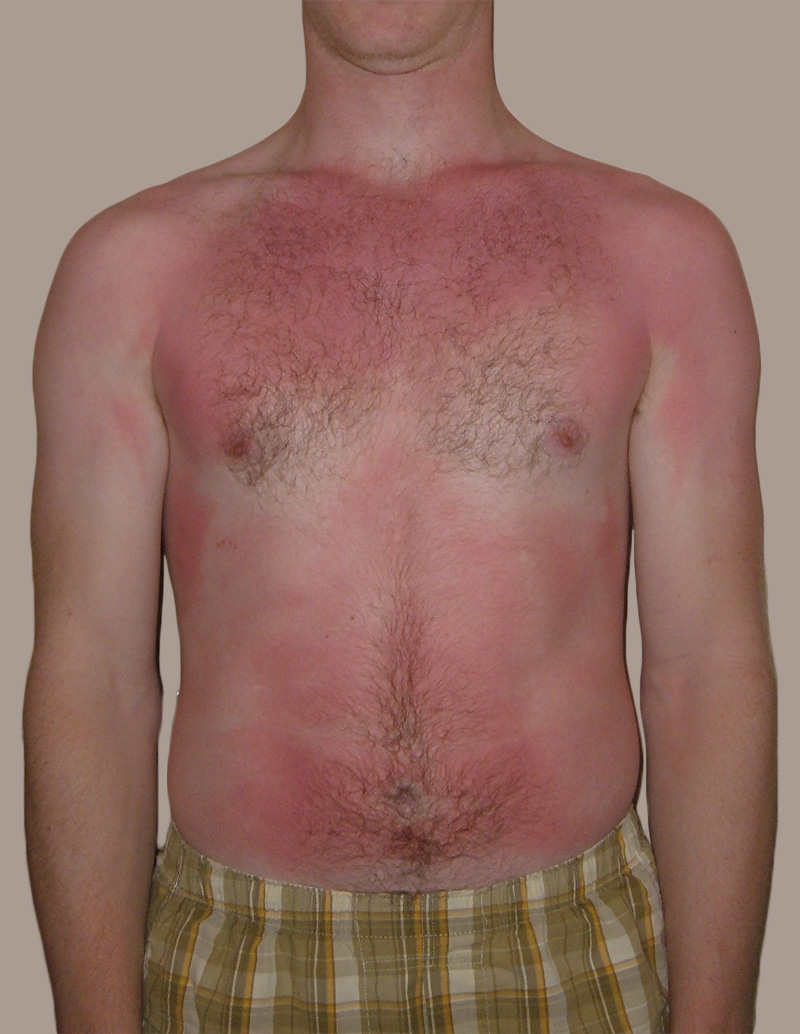 Sunburn is an acute symptom in which the skin becomes red and inflamed by exposure to ultraviolet rays (sunburn), and pigmentation of melanin, the pigment of the human body, on the skin surface (sun tanning). In sunburn, the skin becomes red and painful 2-6 hours after sunburn, and often peels later, whereas in suntan, it appears several days later and is somewhat delayed. Skin cancer is known as an effect of sunburn. For sunburn treatment, if the sunburn is mild, use moisturizing, cooling, and hydration with attention to dehydration. To prevent sunburn, use a parasol, hat, and clothing, and apply sunscreen to exposed areas.

Occurrence of sunburn and UV rays

Tanning occurs as a result of overexposure to sunlight (or UV artificial light), when the protective capacity of the body's pigment, melanin, is exceeded. The time of day when the UV rays are strong, the geographical altitude, and the reflection from below by water, snow, and sand are also conditions that can cause severe sunburn. In the case of snow, it is called "Yukiyake". There are individual differences in the amount of melanin, but generally darker-skinned people have more melanin than fair-skinned people, and the former are less likely to tan. Ultraviolet rays are divided according to their wavelength into UVA (long wavelength ultraviolet rays), UVB (medium wavelength ultraviolet rays), and UVC (short wavelength ultraviolet rays). UVC is completely attenuated by the atmosphere while passing through the ozone in the Earth's atmosphere, leaving enough UVA and UVB to cause a sunburn in less than 15 minutes. In recent years, the depletion of the ozone layer by chlorofluorocarbons (CFCs, a type of CFC) has increased globally, especially in the Southern Hemisphere, and ozone depletion and periodic ozone holes have made UV radiation dangerously high. There is a concern that it has penetrated to the level. Previously, only UVB was thought to cause skin cancer, but both UVA and UVB cause skin cancer. Some drugs increase the risk of sunburn. Antibiotics such as tetracyclines, antiepileptic drugs, antipsychotics and contraceptives have side effects of photosensitivity and increase the risk of sunburn. Anticancer drugs may cause dark sunburn depending on the type

There are two types of sunburn. The skin turns red 2-6 hours after exposure to UV rays, and sunburn, which is the most painful after 6-48 hours, and pigmentation progresses for 24-72 hours. Suntan. 3-8 days after a sunburn occurs, the skin begins to peel.

Sunburn refers to a state in which UVB rays penetrate the epidermis and reach the papillae of the dermis, resulting in hyperemia in the capillaries in the papillae as an inflammatory reaction caused mainly by direct DNA damage, resulting in a reddish skin color. At that time, when the amount of ultraviolet rays exceeds the protective response of melanin pigments, cell tissues are damaged, and various inflammatory mediators and cytokines, which are signaling substances of inflammation, are produced, causing fever, blisters, and pain. Medically, this is called solar dermatitis.

Suntan works on melanocytes with ultraviolet UVA and promotes the production of melanin pigment. There is a time lag due to metabolism until epidermal cells containing a large amount of melanin pigment reach the stratum corneum from the basal layer, which is why the skin turns dark after a while after being exposed to ultraviolet rays. UVA does not cause redness or inflammation, but it reaches deep into the dermis and causes wrinkles and sagging.