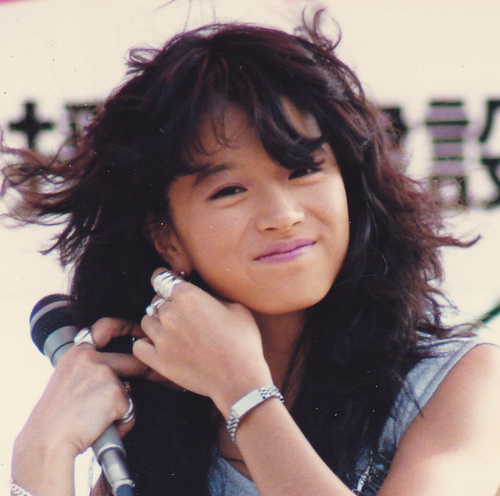 Akina Nakamori (Japanese: 中森 明菜; born July 13, 1965) is a Japanese female singer and actress. She is currently affiliated with her entertainment agency, FAITH, and her record label is Gahee Rekozu, a private label under Universal Music Japan. She was born in Ota Ward, Tokyo, but soon after she moved to Kiyose City, she grew up there all along. In 1981, she won the audition program "A Star Is Born!" and debuted the following year with the single 'Slow Motion' (スローモーション). She was one of the most popular Japanese female singers of the 1980s. After her debut, she said that alternately singing an innocent ballad song and a dark song like 'Girl A' resembled Yamaguchi Momoe, who had just retired at the time, so during the early days of her debut, she said that she had been "second 2". It was called "Momoe Yamaguchi of She herself actively participated in song planning and choreography to establish her position as an artist rather than a singer who only sings. She led the Japanese fashion in the 1980s. Also known as processing. She made her debut in 1983, with hits such as 'Second Love' and 'The Myth of 1/2', but within a year she took the number one spot in record sales by singer. In 1984, starting with her 10th single, 'It's not a decoration, tears are' (飾 り じ ゃ な い の よ 涙 は), she tried to differentiate her musicality from other idols. In addition, in 1985, with 'Me Amore' (ミ・アモーレ / Meu amor e...), and in 1986, the following year, with 'DESIRE -Passion-' (DESIRE -情熱-), they won the Grand Prize at the Japan Record Awards for two consecutive years, and in 1985 In 1987, he was reborn as a talented singer with both popularity and singing ability from his early idol image by re-recording the number one record in sales by singer for three consecutive years. . She went on hiatus for about a year after she attempted suicide at his home after an affair with her former lover Masahiko Kondo in 1989, but the following year she returned to 'Dear Friend'. In 1994, she released "Kahi" (歌姬), which covered the songs of her senior singers in her own color, and she continued her musical career by holding her concert tour every year. In addition, starting with the lead role in the drama "As Honest" (素顔のまで) aired on Fuji TV in 1992, he appeared in various dramas as a lead or a supporting role, and appeared frequently in entertainment programs. In October of that year, he canceled his year-end dinner show and announced an indefinite suspension of activities due to ill health, and stopped his music activities. In July 2014, she released her new song after 3 years and 9 months with 'SWEET RAIN', and also in January 2015, her official single 'Rojo -Tierra-' after 4 years and 6 months. With the release of ', she returned to the music industry.

She was born on July 13, 1965 in Ota-ku, Tokyo, the third daughter of Akio Nakamori and Chieko Nakamori. She had her two older sisters, two older brothers, and her younger sister in consolation. All of her siblings, including her first name Akina (明菜), are named after her father's name, Akio (明男). Her father ran a butcher's shop, but her family's financial situation forced her to live separately. When she first entered elementary school at the age of six, she wrote her hopes for the future in school essays, she wrote a singer, and she paid great attention to singing. She mainly sang in Japanese music, such as Matsu Toya Yumi and Yazawa Eikichi.