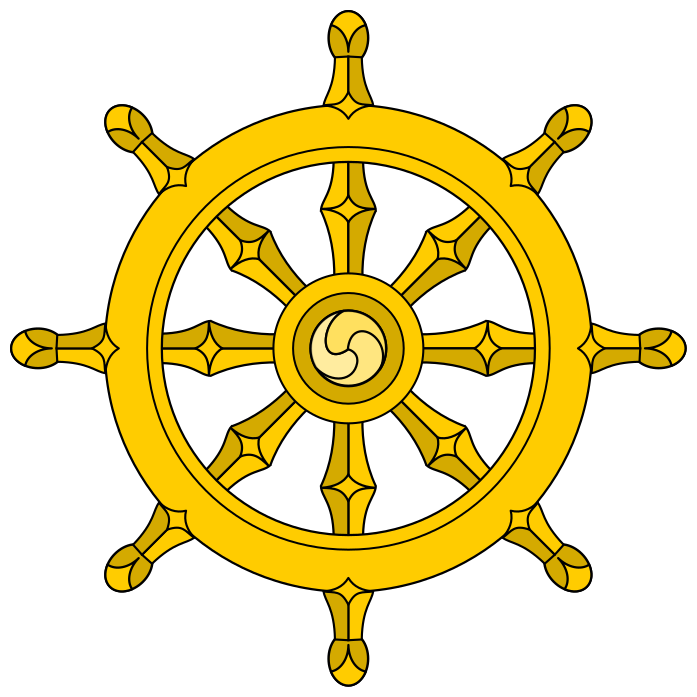 Buddhism (English: Buddhism; Sanskrit: बौद्ध धर्म) is an Indian religion founded in the 6th century BC by Siddhartha Gautama. Buddhism is his teaching and also a religion that teaches that one will realize the truth and become a Buddha (Buddha, an enlightened person). Specifically, the purpose of the teaching is to be free from suffering or to reach a state of being free from suffering, which is different from the teaching that Lao Tzu said that there is no way that can be expressed concretely. It can be divided into Sangjwa Buddhism and Mahayana Buddhism. Over the past 2,500 years, Buddhism has had various and complex religious traditions. However, Buddhism can generally be explained as consisting of the three treasures of Buddha as reformation, Dharma as teaching, and the community that follows them. They are different because liberation or nirvana means liberation as explained above, and prana or nirvana means wisdom. Reaching enlightenment is the same as reaching Nirvana. This view is clearly expressed in the Buddhist scriptures, the Nirvana Sutra. Buddhism in Korea was introduced through China during the Three Kingdoms Period. Buddhism in China was introduced during the Han Dynasty, and the Buddhist scriptures were later translated into Chinese as a personal or national project. In addition to the Sutras of Aham, Phanya and Mahayana Sutras were translated and distributed in large numbers at the same time. Buddhism based on the Korean translation of the scriptures can be said to be the basis of East Asian Buddhism (Northern Buddhism) in China, Korea, and Japan. Korean Buddhists have traditionally recite the Korean version of the scriptures, the Tripitaka Koreana. In recent years, Korean translation of early Buddhist scriptures handed down to the South is also actively underway. A remarkable level of Nikaya translation work has already been done in England for about a century.

Origin of the historical perspective

Historically, Buddhism was founded by Siddhārtha Gautama, who was born as a prince of the Shaka tribe around the 6th century BC, and was established mainly in the Magadha kingdom in present-day Nepal and northeastern India. Siddhartha's birthplace was Lumbini, and his birthplace was Gabira Castle (迦毘羅城, Kapilavastu). Because of this, the Magada Kingdom is thought to be the center of the emergence of Buddhism rather than his birthplace or place of growth. Siddhartha led many disciples in places such as the origins of the Srāvastī kingdom, a country near the Ganges River, and the bamboo forests of the Magadha kingdom. Among the major pupils of Shakyamuni during his lifetime, teenage pupils such as Saribul, Mok Geon-ryeon, Gaseop, and Anan are known. The main places related to Siddhartha's life are called the Eight Holy Lands.

King Ashoka, who was the third king of the Mauryan Dynasty (4th - 2nd century BC) of India, waged a war of conquest and won, but was shocked by the horrors of the war and returned to Buddhism. As a result, Buddhism spread throughout India, and it became an opportunity for Buddhism to spread outside India. Buddhism, which originated in the northern route, spread through Gandhara to Tibet, Persia, Afghanistan, and Taklamakan. These areas were called Western Stations in China, and Buddhist scriptures and images were handed down and the scriptures translated into Korean by local monks such as the Daewol clan, Anshi, and Kanggeo. Buddhism, which was transmitted to China