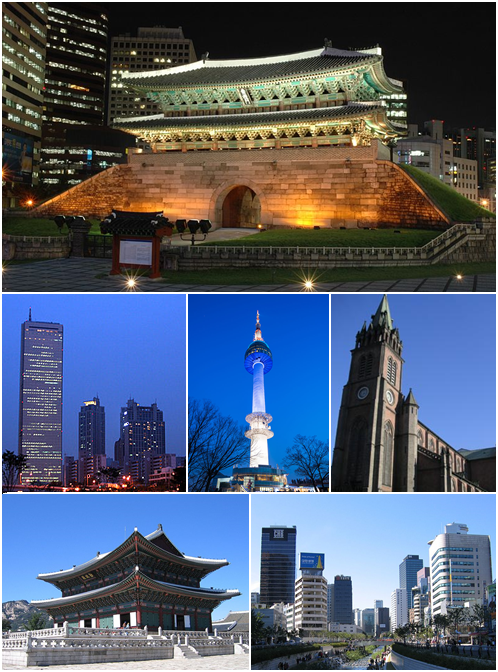 Seoul is the capital and largest city of South Korea. It was Wiryeseong, the first capital of Baekje during the Three Kingdoms period, Nanjing of Goryeo, and has been the center of politics, economy, society and culture of Korea ever since it became the capital of Joseon. The Han River flows through the center, and it is divided into Gangbuk and Gangnam. Bukhansan, Gwanaksan, Dobongsan, Bulamsan, Inreungsan, Cheonggyesan, Achasan, etc. is a city in a basin topography surrounded by mountains. Seoul has an area of ​​605.23 km2, which is 0.6% of the area of ​​Korea, and has a population of about 9.5 million, which accounts for 17% of the population of the Republic of Korea. The seat of the city hall is Jung-gu, and there are 25 autonomous districts. It hosted the 1986 Asian Games, the 1988 Summer Olympics, and the 2010 Seoul G20 Summit. In 2018, Seoul's gross regional product was 422 trillion won.

There are various theories about the etymology of "Seoul", but academia strongly accepts the theory that it originated from Seorabeol, a native language of the Shilla lineage that generally means capital. At this time, there are several theories about the original meaning of Seorabeol, the gacha notation in Chinese characters. There is an opinion that Seorabeol is also written as Geumseong in the Samguk Sagi, and that it is engraved with the meaning of 'new land', that is, "Seol [Sae: 新, 金] - Beol [land: 羅, 城]" including Silla. There was no definitive confirmation of the exact pronunciation of Seorabeol in ancient-medieval Korean, and the pronunciation was discovered after the creation of Hunminjeongeum and the appearance of the notation "Seoᄫᅳᆯ". As for the phonetic transcriptions of Korean characters in Seoul, the syllables of 21 Dohoegosi, Hangyeongjiryak, Seoul (徐菀) in the Supplementary Documents Remarks, Dongsagangmok, Seoul (徐蔚) in Bukhakui, Seoul (徐鬱) in Daedongjiji, and Seool (徐) in Angyeopgi兀), etc. As such, during the Joseon Dynasty, Seoul was also called Seoul (Shuᄫᅳᆯ), Gyeonggido, Gyeongbu, Gyeonggyeong, Gyeongseong, and Gyeongjo in addition to Hanyang and Hanseong. As can be seen from Kim Jeong-ho's Suseonjeon, there are also examples where it is written as waterseon (首善). All of these, except for Hanyang and Hanseong, are common nouns that mean the capital, which is proof that 'Seoul' was originally a generic noun that meant the capital, not just the Seoul area (inside the four main gates and Seongjeosimni). The Korean dictionary defines the common noun 'Seoul' as 'the city that has a central government and is the center of economy, culture, and politics'. During the Japanese colonial period, Seoul was mainly called Gyeongseong, and after liberation in 1945, the word 'Gyeongseong' was eliminated and it was almost called 'Seoul'. The romanization of Seoul 'Seoul' comes from the 19th century French missionaries who wrote Seoul as Sé-oul. Today, in France, Seoul is written as 'Séoul', and in Spanish-speaking countries it is written as 'Seúl', but all are read as 'Seoul'. Also, in English and American countries, it is generally written as 'Seoul' and read as 'Soul' like the word 'Soul' meaning soul. With this in mind, on November 13, 2006, the Seoul Metropolitan Government designated the Seoul sub slogan as 《Soul of Asia》. Because Seoul is a native language, not a Chinese language, there is no Chinese character for Seoul, so in China, Seoul was called Hancheong (Simplified Chinese: 汉城, Traditional: Hanseong, Pinyin: Hànchéng, Hanseong), and the 1988 Seoul Olympics were also called Hanseong Olympics. However, in 2005, the Seoul Metropolitan Government decided to use the same pronunciation as Seoul (Simplified Chinese: 首尔, Traditional: 首爾, Pinyin: Shǒu'ěr, Sui) as the official Chinese language for Seoul, and this notation is gradually spreading. The Japanese spelling is 'souru' (ソuru). After liberation, the U.S. military