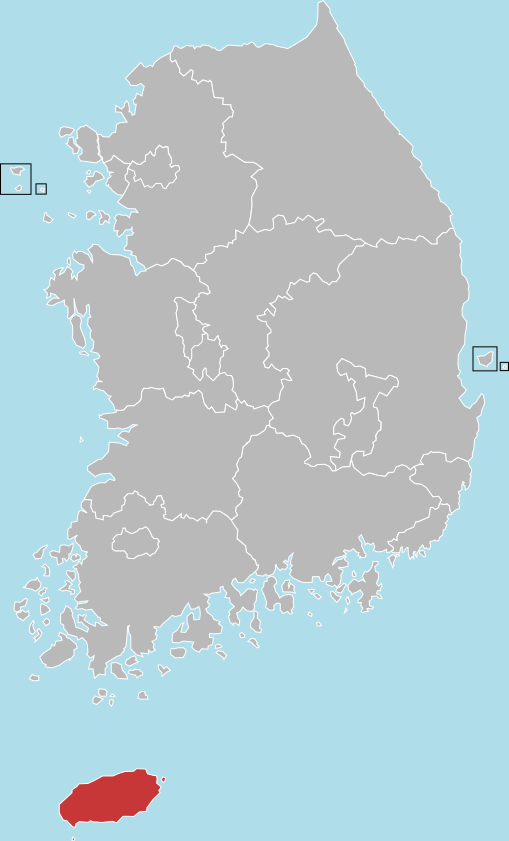 Jeju Special Self-Governing Province (濟州特別自治道) is a special self-governing province that observes Jeju Island and its annexed islands in the Republic of Korea. Currently, Jeju Special Self-Governing Province is the only special self-governing province in the Republic of Korea. It consists of 8 inhabited islands and 55 uninhabited islands, including the main island of Jeju Island, the largest island in Korea, Marado, Udo, and Chuja Islands. With the beautiful natural scenery around Mt. Hallasan, service industry and fishing industry have developed, and Jeju volcanic island and lava caves have been registered as UNESCO World Natural Heritage Sites. It belonged to Jeolla-do during the Joseon Dynasty, but it was separated from Jeollanam-do under the U.S. Military Government, and in 1946 it was separated from Jeollanam-do and became Jeju-do. From 2006, it was promoted to a special self-governing province, and regional autonomy was enhanced, such as the implementation of autonomous police, expansion of educational autonomy, transfer of some central authority, and granting of autonomous legislative power and autonomous finance. It is a single-tiered metropolitan local government that does not have a basic local government in the lower level, and there are two administrative cities, Jeju-si and Seogwipo-si, in the north and south.

The ancient name was Tamra.

In Korea, since ancient times, Jeju has been referred to as Doi, Dongyeongju, Seopra, Tammora, Tamra, Takla, Yeongju, etc. called All of these names, except for Dongyeongju and Yeongju, mean 'island country'. Jeju Island has already been inhabited by modern humans since the early Neolithic period (about 10,000 to 8,000 years ago). Various stone tools excavated from various areas, such as Gosan-ri and Bukchon-ri, as well as bones and pottery made from animal bones, support this, and in Hamori, Samyang-dong, and Gapado, there are also remains of the Bronze Age and Iron Age. Dolmen, tidal stones, earthenware, and poison tombs have been excavated.

The Tale of Gaebyeok and the Three Kingdoms Period

Unlike other regions, Jeju Island has a three-star myth due to its geographical feature as an island. According to this, three gods, Yang Eulna (良乙那), Go Eulna (高乙那), and Bueulna (夫乙那), emerged from the land called Moheunghyeol (毛興穴, today Samseonghyeol) north of Hallasan Mountain to hunt. said to have lived They are said to have become the ancestors of the surnames of Jeju-do, taking as wives three princesses from Byeokrang-guk, farming and raising cattle and horses. Separately, among the traditional samurai of Jeju Island, 'Baepodoup', in which heaven and earth are created, and 'Cheonji, Wangbonpuri,' in which two brothers compete to divide and rule the realm and the afterlife, are handed down.

After being the 15th descendant of Go Eul-na, three brothers, Qing and Gye, joined Silla, received the posts of Tamna, and established Tamna. In 476, Tamna made a tribute to Baekje. In 498, it was conquered by King Dongseong of Baekje. In 662, Tamna became a vassal state of Silla.

In 938 (the 21st year of King Taejo), Go Mal-ro, the crown prince of Tamna, joined the Goryeo court, and Tamna was incorporated into the Goryeo Dynasty. This is also evidence that Goryeo is an emperor. After that, during the Goryeo Dynasty, the titles of Tamna-guk, Seongju, and Prince were maintained, and the autonomous character of Tamna-guk was strongly maintained. In 1104 (the 10th year of King Sukjong), the monarchy was abolished and Tamna-gun became an administrative district of Goryeo. However, in reality, it was in the form of a kingdom in which a prince ruled the island. 1273 Mongolia (Wonna)