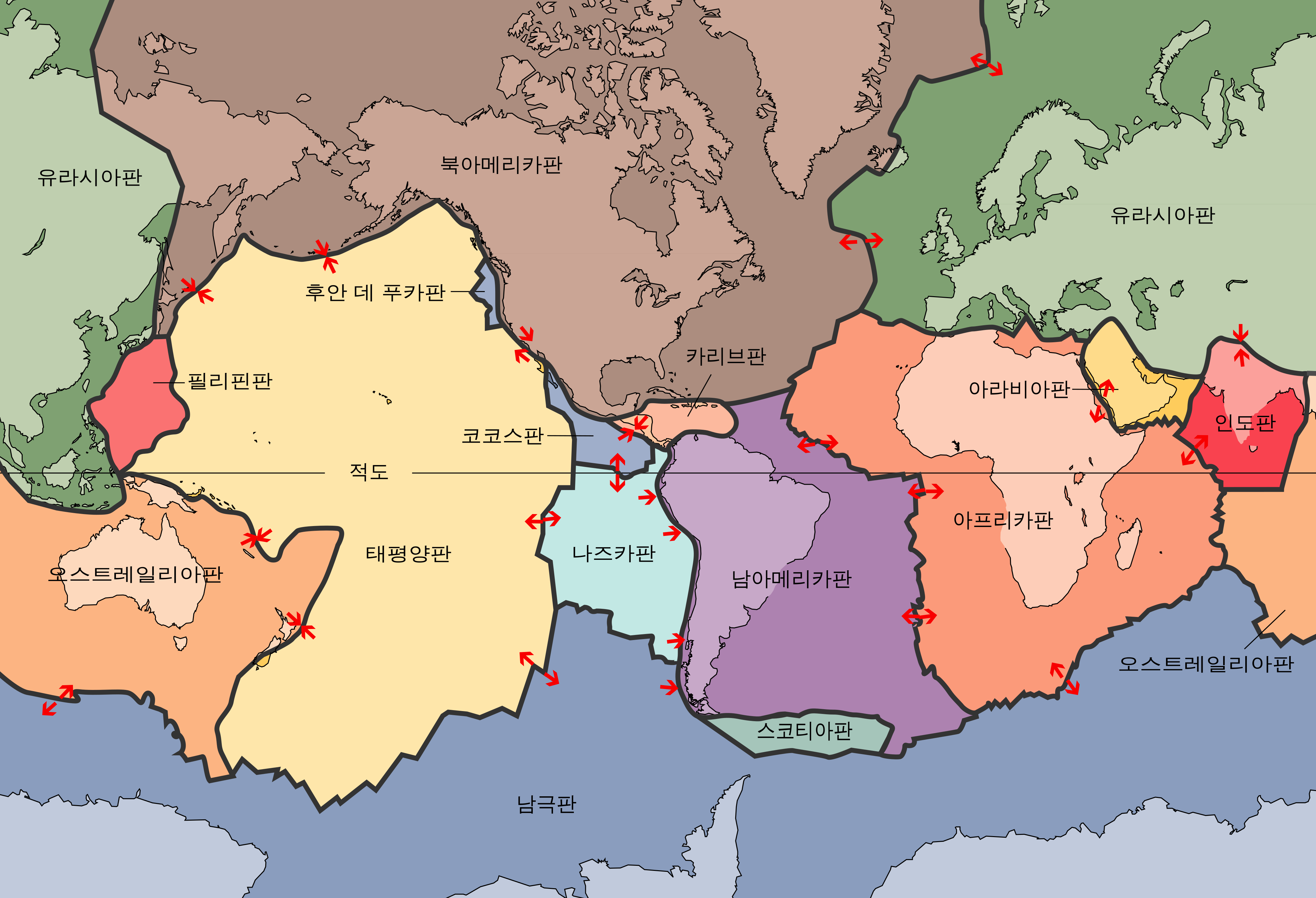 Plate tectonics (板構造論, plate tectonics) is a geological theory that explains continental drift. Plate tectonics evolved from explaining 'continental drift', and most scientists in this field now accept plate tectonics. According to plate tectonics, the outermost part of the Earth's interior consists of two layers: the lithosphere and the asthenosphere. The lithosphere is composed of the crust and the uppermost mantle that has cooled and hardened, and the softer sphere below is composed of a viscous and fluid mantle. For millions of years or more, the mantle behaves like an extremely viscous liquid, but behaves like an elastic body for short-duration forces, such as the propagation of seismic waves. The lithosphere floats above the soft sphere. The lithosphere is divided into several pieces called plates. The ten major plates are the African, Antarctic, Australian, Eurasian, North American, South American, Pacific, Cocos, Nazca, and Indian plates. In addition to these, a number of small plates move with each other to form three types of boundaries: convergent boundaries, divergent boundaries, and conservation boundaries. Earthquakes, volcanoes, orogenic movements, and trenches occur mostly along plate boundaries. Plate tectonics started from two different theories: the continental drift theory, which began to be recognized in the early 20th century, and the ocean floor expansion theory, which began to be known in the 1960s. Plate tectonics was developed in the late 1960s, and after that, it revolutionized earth science and was accepted by almost all scientists. It is accepted as a revolutionary theory comparable to the periodic table of chemistry, the discovery of the genetic code in biology, and quantum mechanics in physics.

From the late 19th to early 20th centuries, geologists believed that the major shapes of the Earth's surface were fixed. For example, the formation of the orogeny was explained through the theory of orientational history, which is the vertical motion of the crust. Already in 1596, the two coastlines of the Atlantic Ocean were similar, so there was an idea that the two sides might have been attached at one time. Until the early 20th century, many theories were put forward to explain this apparent complementarity, but many proposals were not convincing because the Earth was solid. This was done through the calculation of the cooling rate. However, the discovery of radioactive elements and consequent thermal radiation that year sparked a reconsideration of how to calculate the age of the Earth. According to previous calculations, even if the Earth started in a glowing state, it would return to its present temperature within tens of millions of years. When the new heat source was introduced, scientists found that the Earth was much older than previously thought, and that its core could still be hot enough to remain liquid. Plate tectonics was developed from the theory of continental drift published by Alfred Wegener in 1912. He expanded his theory further in his 1915 book The Origin of Continents and Oceans (Die Aufstehung der Kontinente und Ozeane). Wegener suggested that the Earth's continents were once one large continent and then torn apart. According to this, the Earth's continents are not attached to the core, but float like an iceberg. Continents are made of relatively low-density granite, so they can float on a dense basalt-like oceanic crust. He argued that the driving force for continental drift was the tidal forces of the sun and the moon.