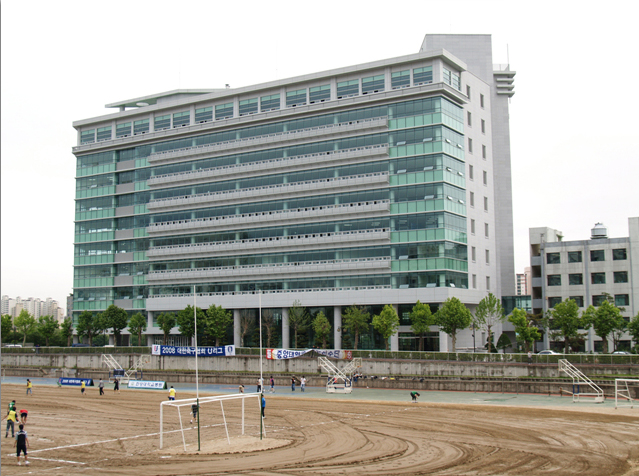 Fusion Technology Center is a convergence technology research institute located in Hanyang University, Seongdong-gu, Seoul, Korea. There is the Japanese Institute of Physics and Chemistry, which produced the Nobel Prize, and Samsung Electronics The first semiconductor research center jointly established by Hynix and The lantern is located in this building, and Japanese Prime Minister Taro Aso visited the building in 2009. It was built by Byucksan Construction with the support of Seoul Metropolitan Government and is located on the site of Hanyang University in Haengdang-dong, Seongdong-gu.

It was built in 2008 with a total of 13 floors. Seminar room or laboratory. In addition to basic facilities such as offices, there are clean room facilities used for semiconductor processing, etc. Famous domestic and foreign research institutes, such as the Japanese Institute of Physics and Chemistry, Samsung Electronics, and Hynix, are located here, and it is also used as a building for the Department of Energy Engineering at Hanyang University.

A research organization jointly established by a research organization in Korea and Japan, the headquarters is located in the Fusion Technology Center. In addition to research organizations in Korea, research institutes in Singapore, India, China, and the United States are participating in this organization. Among participating organizations, the Institute of Physics and Chemistry has produced three Nobel Prize winners, and Hanyang University has the largest technology transfer income among Korean universities. We are researching the convergence of IT-NT-BT. It is supported by the Ministry of Education, Science and Technology of the Republic of Korea. It has an industry-university-research cooperation system with the Department of Energy Engineering at Hanyang University.

It is the first semiconductor research center created in cooperation with Samsung Electronics and Hynix, and is researching STT-MRAM (Spin Transfer Torque - Magnetic Random Access Memory), which is considered one of the next-generation memory technologies, and next-generation non-volatile memory. 300mm-class semiconductor equipment was built at the university for the second time in the world, We are conducting research and development in the relevant field jointly.