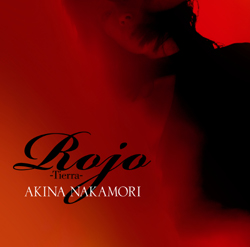 "Rojo -Tierra-" is the 49th single by Japanese singer Akina Nakamori, released on December 31, 2014 and January 21, 2015. (Digital download, CD: UPCH-5833) The lyrics were written by Minako Kawae and singer Nakamori under the name Miran:Miran, and the music was composed by Daisuke Asakura (浅倉大介). It was released under the label Universal J. It is the first single released in 4 years and 6 months after Akina Nakamori released her last single, 'Crazy Love', in July 2010, and is an electronic dance style song with an African sound. 'Rojo' means red in Spanish, and 'Tierra' means earth, which is why the album cover has a red background. On December 31, 2014, when Akina Nakamori participated in the 65th NHK Red and White Singing Contest after 12 years, it was pre-released as a digital download in advance, and this song was also shown in a studio broadcast in New York. On January 21, 2015, shortly after its release, it first appeared at #7 on the Oricon Daily Singles Chart. Also, on February 2, 2015, it ranked 8th on the Oricon Weekly Singles Chart, which is the first time in 21 years since