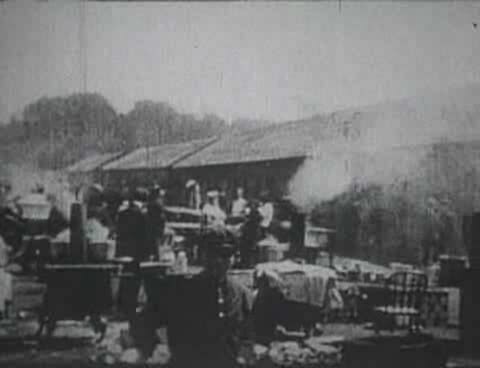 An earthquake is a vibration or jerking movement of the Earth's crust. Earthquakes happen when a lot of energy is suddenly released in the earth's crust. The energy then propagates in a wave motion from the center to the environment. The imaginary point where the quake originates, the center of gravity of the energy density, is called the hypocenter. The point on the Earth's surface perpendicularly above it is called the epicenter. A line of equal tremor intensity around an epicenter is called an isoseist. Seismology is the science of earthquakes. During an earthquake, triboelectric effects occur in the form of flashes of light. Most earthquakes occur in the earth's crust to a depth of about 30 kilometers. However, tremors also occur at depths of up to about 700 kilometers. Most earthquakes occur around the Pacific Ocean, in the Mediterranean, in the Himalayas and Indonesia. Earthquakes also occur in the middle of the oceans. Earthquakes that originate below sea level are, less correctly, also called seaquakes; a tidal wave or tsunami can then be the result. However, an earthquake below the sea's surface does not always have to trigger a tsunami. This only happens when large areas of soil rise at the subduction zone, displacing an anomalous amount of water toward land. The water will then spread in a circle as if one throws a stone into the water. Those ripples resemble the tsunami waves, but they are much smaller. An ordinary wave differs from a tsunami, a tsunami will continue to spray water over land, an ordinary wave simply retreats after the wave action, a tsunami can pass over high sea walls. Severe earthquakes and tsunamis often cause many casualties and extensive damage. The strongest earthquake ever recorded was the Valdivia earthquake in Chile in 1960 (9.5 m w {\displaystyle M_{\mathrm {w} }} ). The strongest earthquake in Europe is known to have been the Lisbon earthquake of 1755 (8.5-9.0 m w {\displaystyle M_{\mathrm {w} }} ).

Many earthquakes are related to the slow movements of the earth's crust. On a large scale, it may concern the tectonic plates, which move slowly relative to each other (plate tectonics). On a smaller scale, deformation also takes place within the plates. This relative movement creates tension in the crust. If the tension is high enough, a jerky movement of the material on either side of a crack in the crust can occur: the earthquake. In this case (part of) the built-up voltage is discharged. Aftershocks are smaller tremors that are felt within hours of the initial tremor. These are often the result of stress discharge on other, nearby parts of the same fracture or on other nearby fractures. Aftershocks happen in the days after the earthquake. When it has been quiet for 7 days, it is no longer called an aftershock but a new earthquake. Earthquakes at depths of several hundred kilometers are often attributed to other mechanisms. First, these can be caused in a subducting plate by the transition of minerals from one phase to another (see convection in the earth). When the old phase was metastable, the transition to the new phase can be very sudden. Similarly, the sudden release of water from hydrous minerals in the subducting plate can cause an earthquake. Small earthquakes are the result of volcanic activity (volcanic earthquakes) or caused by the collapse of cavities in limestone formations or mine(s) (collapse earthquake(s)). Human intervention can cause tremors.