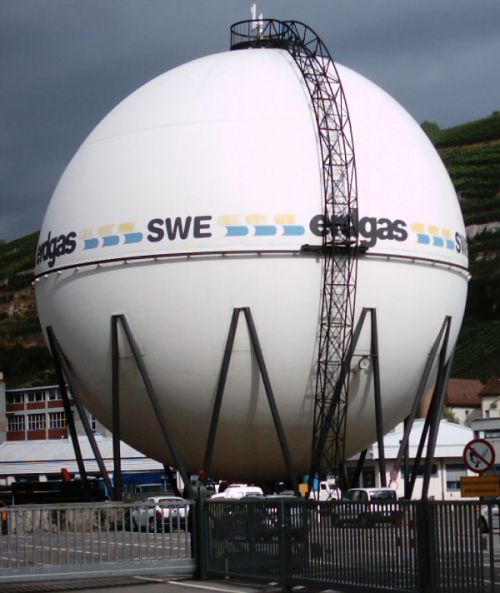 Natural gas is a name for all gases escaping from the ground, but it is used almost exclusively for fossil fuels. Combustible natural gas is a mixture of light hydrocarbons (mainly methane) and smaller amounts of nitrogen, oxygen and carbon dioxide. It arises from the same process that leads to the formation of petroleum and represents the lighter fraction of organic products from that process. Natural gas is often found together with petroleum, although sometimes the gas sees a chance to penetrate into other layers of the earth than the much heavier oil and so a separation can occur. In Europe, natural gas is mainly found in and around the North Sea, including in the north of the Netherlands (see also Natural gas extraction in the Netherlands). Natural gas from Slochteren in Groningen consists of 81.9% CH4 (methane), 3.3% higher gaseous hydrocarbons and 14% nitrogen and 0.8% carbon dioxide. Natural gas from other extraction sites often has a different composition and sometimes also contains hydrogen sulphide ("sour gas").

The precursor to natural gas, the kerogen or earth wax, formed on the sea floor as opposed to coal and lignite, which formed in a swampy environment. Kerogen is a solid that has no tendency to rise. It was necessary that the seabed was very low in oxygen, so that the settling organisms could not be completely digested by scavengers or bacteria. Thus, as a result of partial decomposition of the organic matter by anaerobic bacteria, the kerogen formed, which can be found in the so-called tar sands. If the kerogen-containing sediments were later buried deep under other sediments, the temperature could rise to 100 degrees Celsius. In that case, the kerogen was converted into petroleum. At even higher temperatures it was converted into natural gas. Petroleum and natural gas are much lighter than rock and water, so if the overlying rock was porous enough, the fossil fuel was pushed upwards. Often the petroleum or natural gas eventually came across an impermeable layer, where a petroleum or natural gas deposit forms. Natural gas is also extracted from other organic 'waste'. During the Carboniferous, many plants and trees in the swampy landscape turned into coal, which is also a source of gas. This is the case, for example, in Groningen gas (near Slochteren).

Natural gas has a density of approximately 0.833 kg/m³ (at 1 bar, 0°C). The relative density with respect to air is approximately 0.65. The gas therefore 'floats' on air. This will cause it to rise, similar to air (bubbles) underwater. The combustion heat of natural gas supplied to Dutch households is approximately 35.17 MJ/m³ (upper value) or 31.65 MJ/m³ (lower value). The Wobbe index (which is different from combustion heat) of natural gas supplied to Dutch households must be between 43.46 and 44.41 MJ/m³ (above value). This is laid down by law because incinerators are designed for this value, so deviation from this can be dangerous. Natural gas differs in composition depending on the field from which it is extracted. As a result, the heat of combustion and the Wobbe index also differ. The Wobbe index is especially important for combustion in domestic combustion boilers. That is why the Netherlands strives to keep gas supply as constant as possible. It is even regulated by law that this between above and beyond