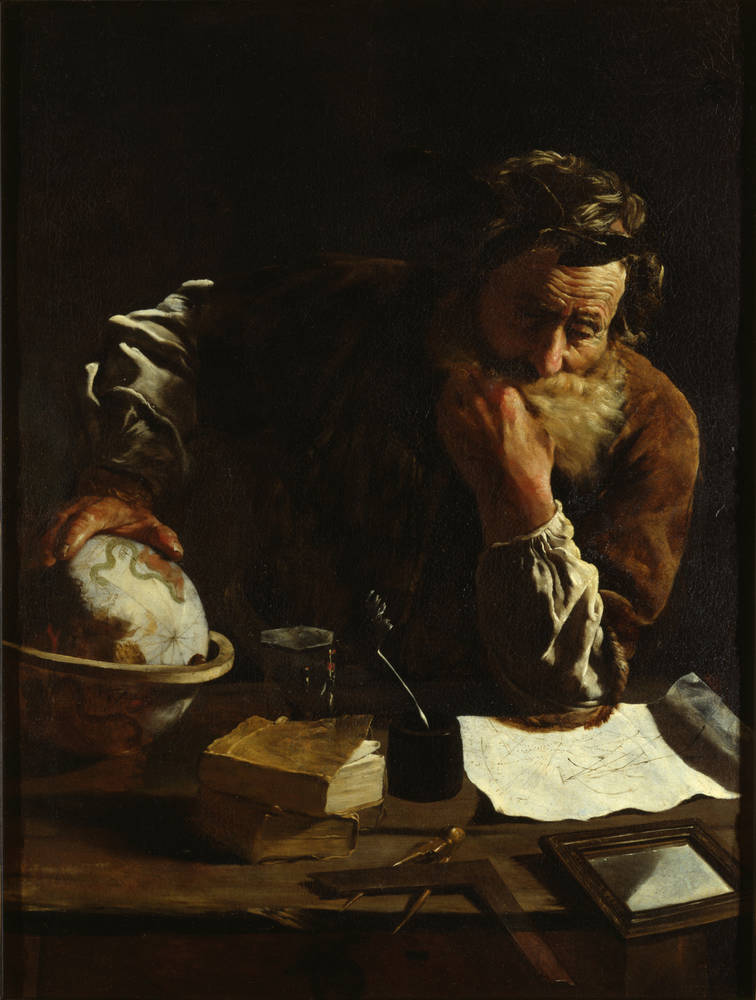 Archimedes of Syracuse (Ancient Greek: Ἀρχιμήδης ) (Syracuse, 287 BC – there, 212 BC) was a Greek mathematician, physicist, engineer, inventor and astronomer. Archimedes is widely regarded as the greatest mathematician of antiquity and one of the greatest mathematicians of all time. He introduced the exhaustion method for calculating the area under the arc of a parabola by summing an infinite series. He also gave a remarkably accurate approximation of π. He also defined the spiral that bears his name, formulas for the volume of planes of rotation about an axis, and an ingenious system for expressing very large numbers. In ancient times, Archimedes was much more famous for his natural science and engineering achievements. In this way he laid the foundations for hydrostatics, statics and gave an explanation for the principle of the lever. He is seen as the designer and constructor of the Archimedes screw named after him (a predecessor of the auger). He is also said to have been involved in the design of innovative siege machines. Modern experiments have disproved claims that Archimedes designed machines that would have been able to lift attacking ships from the water or set them on fire using a collection of mirrors. Archimedes was killed by a Roman soldier at the end of the Siege of Syracuse. It was later alleged that this was contrary to an order issued by the Roman army command to spare him.

Although few details about his life are known, he is considered one of the most important scientists of classical antiquity. His contributions to physics include the foundations of hydrostatics, statics, and the explanation of the principle of the lever. He is credited with the design of a number of innovative machines. Examples include siege weapons and the Archimedes screw named after him. Modern experiments have been conducted to test the war machines attributed to Archimedes, such as lifting attacking ships from the water and setting ships on fire with mirrors. The mirror method turns out to be a myth. In classical antiquity, unlike his inventions, his mathematical writings were little known. Although it was read and quoted by mathematicians from Alexandria, the first comprehensive compilation by Isidore of Miletus, one of the builders of the Hagia Sophia, did not appear until AD 530, in the early Byzantine period, when Greek became Latin. was displacing in the Eastern Roman Empire. The commentaries by Eutocius of Ascalon in the sixth century AD brought the works of Archimedes to the attention of a wider audience for the first time. The relatively few copies and fragments of Archimedes' works that survived the Middle Ages were an influential source for scholars during the Renaissance. 17th-century founders of the scientific revolution, such as Galileo Galilei and Isaac Newton, were also inspired by the work of Archimedes. The discovery in 1906 by Johann Heiberg of previously unknown works by Archimedes in the Archimedes palimpsest has provided new insights into how Archimedes obtained his mathematical results.

Archimedes was born around 287 BC. born in the Sicilian port city of Syracuse. Syracuse at that time was a self-governing colony, part of Magna Graecia. His date of birth is based on a claim by the Byzantine historian Johannes Tzetzes that Archimedes lived to be 75 years old. In The Sand Calculator, Archimedes gives his father's name as Phidias, an astronomer about whom nothing else is known. Plutarch wrote in his Parallel Lives that Archimedes