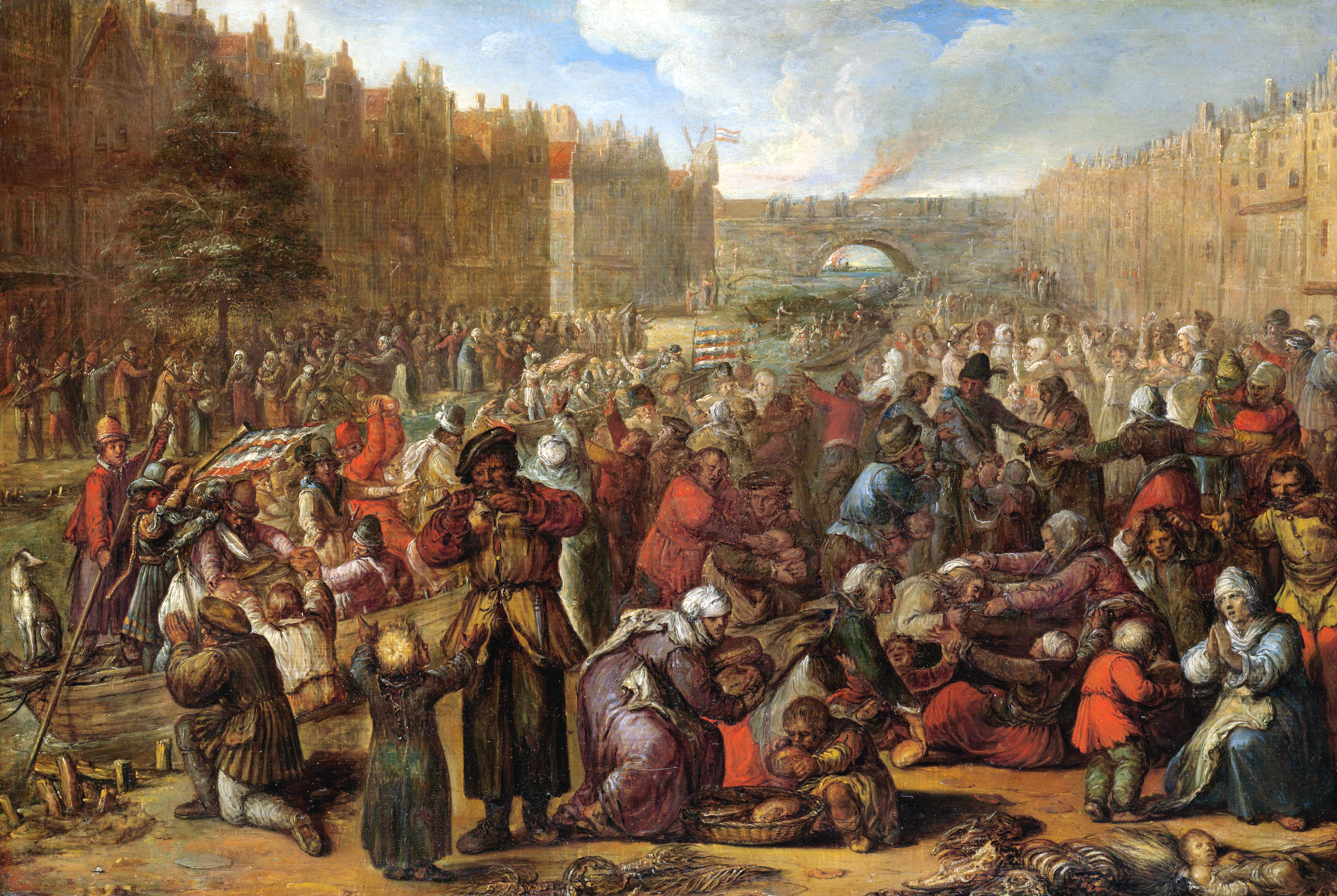 The Siege of Leiden was the siege of Leiden by the Spanish army during the first phase of the Eighty Years' War, the Dutch Revolt. The siege took place from October 30, 1573 to October 3, 1574, with a two-month break in the spring of 1574. The siege ended with the liberation of the city. In 1573, the Dutch Revolt had been crushed almost throughout the Netherlands by the Spanish governor Alva. The resistance only survived in parts of Holland and Zeeland. In October 1573, Leiden became Alva's next target. General Francisco de Valdez was ordered to carry out the siege. Valdez closed Leiden off from the outside world with fortresses and redoubts with the intention of forcing the city to surrender by starvation. William of Orange asked his brother Lodewijk van Nassau to carry out a diversionary maneuver in the east of the Netherlands to lure the Spanish army away from Leiden. Fearful that their supply would be cut, the Spaniards lifted the siege and moved east. A battle ensued at Mook in April 1574 in which the army of Louis of Nassau was crushed to death. Shortly afterwards, the Spaniards resumed the siege of Leiden. In the months that followed, food shortages arose in the city and the population gradually threatened to starve. If Leiden had fallen, Delft would also have become untenable and the revolt might have been smothered. In an act of desperation, the States of Holland agreed to Orange's proposal to flood a large part of the south of Holland in order to drive out the Spanish troops. After breaching the dikes, a fleet of armed flat-bottomed boats manned with beggars and mercenaries moved through the water towards the encircled city. In the night of 2 to 3 October, the Spanish army left the last redoubt at Leiden. The next day the beggars sailed into the city in boats and distributed food to the hungry population. To commemorate the siege and relief, Leidens Ontzet is celebrated every year on 3 October.

In the second half of the 16th century, the Reformation gained a foothold in the Netherlands. On the authority of the Catholic Spanish king and lord of the Netherlands, Philip II, the new religion was suppressed. The dissatisfaction that arose as a result was reinforced by Philip II's urge to centralize and the economic malaise. With the iconoclasm it came to an eruption in 1566. Philip II then appointed the Duke of Alva as governor of the Netherlands with the order to put things in order. Alva arrived in the Netherlands in 1567 with an army of 10,000 men. His harsh approach backfired, and Protestants and moderate Catholics opposed him, led by William of Orange. Initially, the insurgents suffered defeats, but in 1572 the water beggars succeeded in conquering Den Briel. From that city, other cities in Zeeland and Holland were persuaded, whether or not by force, to join the uprising. Gradually, more and more cities in the rest of the Netherlands followed their example. That same year, Alva and his son Don Frederik started a punitive expedition against the rebellious cities. Mechelen, Zutphen and Naarden were brutally looted. Frightened, many cities surrendered without a fight. Only cities in Holland and Zeeland did not cease their resistance, the revolt was already deeply rooted there. A line had been crossed for them and the mercy of the Spanish government could no longer be counted on. That is why they hardened in their struggle instead of surrendering. Don Frederik's rapid advance faltered at Haarlem in early 1573. It took him more than seven months to take the city and afterwards the garrison and prominent citizens were killed. After this he directed his attack on the northern part of Holland, but his next siege, at Alkmaar, failed because the rebels