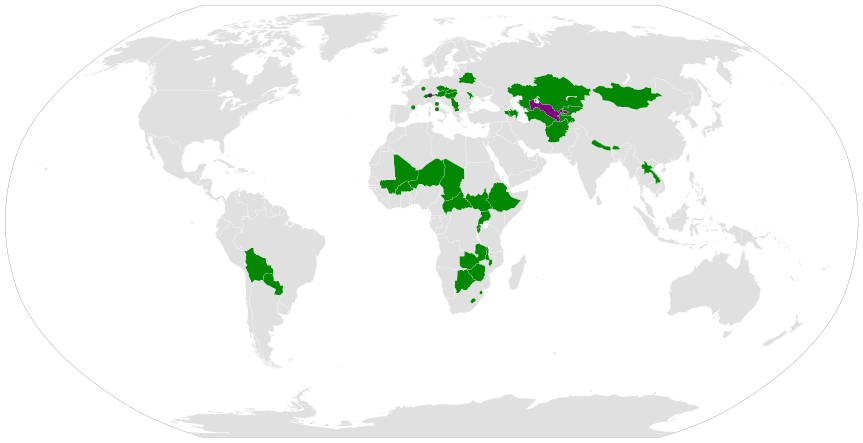 An inland or coastless country is a landlocked independent country that is completely surrounded by the mainland of other countries. It therefore has no direct access to the open sea, but is dependent on other countries for this. In 2012, there were 44 inner states. There are also states that lie on an inland sea and are only connected to the oceans by means of a strait. This is the case, for example, for countries on the Baltic Sea, the Mediterranean Sea and the Black Sea. One or two other countries control access to these seas. The countries located on inland seas are not inland states, but are dependent on the countries that control these straits for their passage. An island state is the opposite of an inner state and is completely surrounded by water.

Historically, inner states have been disadvantaged countries in several areas. These countries were cut off from the sea, so they had no access to resources such as fishing. Coastal regions are often more prosperous and densely populated than inland regions. Countries have therefore made several attempts to avoid being landlocked: The Association Internationale du Congo, which owned today's Democratic Republic of the Congo, obtained at the Berlin Colonial Conference in 1885 a narrow swath of former Angolan territory to connect the colony to the sea. The Republic of Ragusa gave the coastal town of Neum to the Ottoman Empire in 1699, because they did not want a land border with the Republic of Venice. This small municipality was eventually inherited by Bosnia and Herzegovina, giving that country limited access to the Adriatic Sea, dividing Croatia's Adriatic coast in two and crossing the border twice to get to Dubrovnik from Croatia. come. Serbia's 19th- and 20th-century territorial expansions were largely motivated by the desire to gain access to the Adriatic Sea. For this reason, in the 1990s and 2000s, shrinking Yugoslavia tried to maintain control over Bosnia and then Montenegro. Since 2006, Yugoslavia has been dissolved and Serbia exists as an inner state. After the First World War, Poland obtained the Polish Corridor, in order to gain access to the Baltic Sea. This gave the country a characteristic shape. The Danube is an international waterway, so that the inner states of Austria, Hungary, Serbia and Slovakia can have access to the Black Sea with as few obstacles as possible. The same applies to the Rhine, where the Mannheim Act regulates access to the North Sea. Countries also sometimes lose access to the sea, which is often not without consequences: The creation of the new countries Eritrea (in 1993) and Montenegro (in 2006) has resulted in Ethiopia and Serbia respectively becoming inner states. Bolivia lost its coast to Chile during the Saltpeter War between 1879 and 1884. To this day, the Bolivian Navy exercises in Lake Titicaca in case Bolivia regains access to the sea. Austria and Hungary lost their access to the sea as a result of the Treaty of Trianon in 1920. Before this time, the Croatian port city of Rijeka served as the only Hungarian international port in the periods 1779-1813, 1822-1848 and 1868-1918. Although Croatia had constitutional autonomy within Hungary, Rijeka was separate from this and was governed directly from Budapest by a designated governor. When the Allies partitioned the former Ottoman Empire during the Peace of Sèvres towards the end of World War I, Armenia was promised a part of the vilayet Trebizond, which would give Armenia access to the Black Sea. However, the Treaty of Sèvres was not implemented as a result of the Turkish War of Independence and was replaced by the Treaty of Lausanne, in which the

INSERT INTO `wiki_article`(`id`, `article_id`, `title`, `article`, `img_url`) VALUES ('NULL()','Binnenstaat','Inner state','However, the Treaty of Sèvres was not implemented as a result of the Turkish War of Independence and was replaced by the Treaty of Lausanne, in which the','https://upload.wikimedia.org/wikipedia/commons/thumb/9/92/Landlocked_countries.svg/langnl-863px-Landlocked_countries.svg.png')