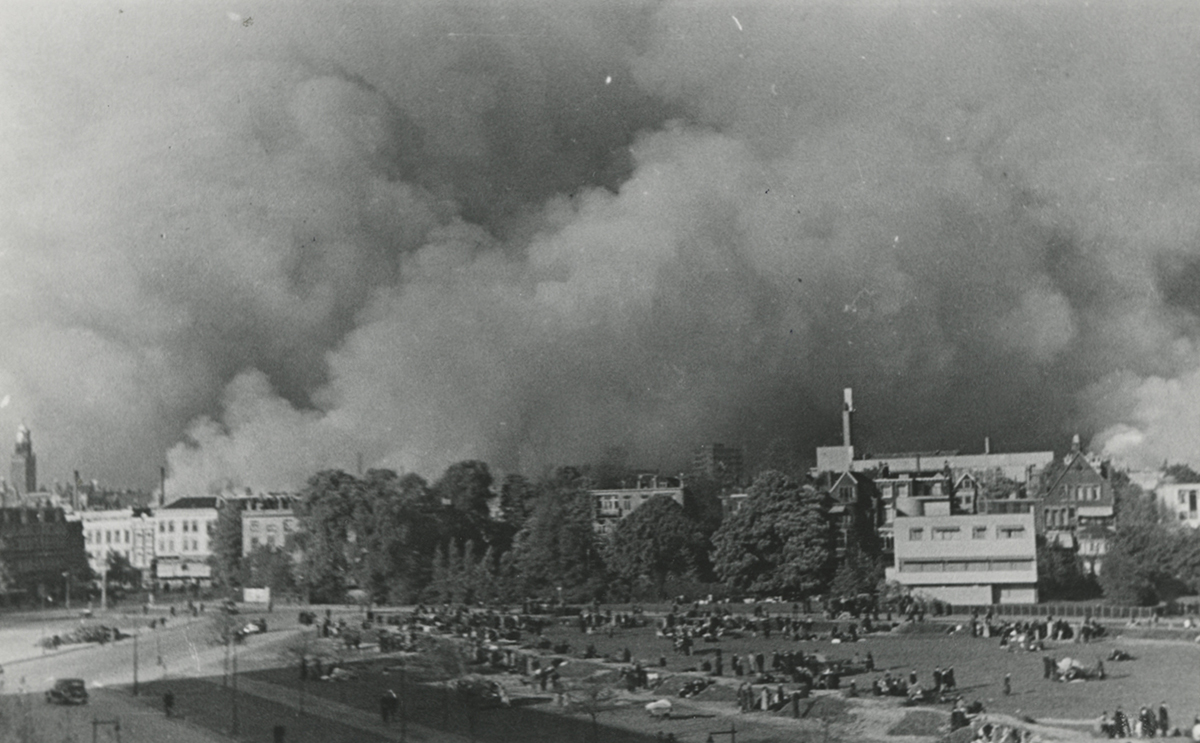 The bombing of Rotterdam was carried out on 14 May 1940 between 13:27 and about 13:40 by German bombers as part of the German military raid on the Netherlands. The fifteen-minute bombardment destroyed almost the entire historic city center of Rotterdam, partly due to the fires that started. 711 people died, and about 80,000 inhabitants became homeless. The bombing was the reaction of the German invaders to the resistance of the Dutch troops (especially at the Afsluitdijk, on the Grebbeberg and on the Moerdijk bridges), which slowed the German advance . The Germans had planned a rapid advance through the Netherlands, Belgium and Luxembourg in the campaign against France. The bombing led to the surrender of Rotterdam the same day and under the threat that other cities would be bombed, starting with Utrecht, until the surrender of the Netherlands on 15 May 1940.

Already on May 10, the first day of the Second World War in the Netherlands, German paratroopers landed in South Rotterdam. During this action bombs were dropped on the city and the North Island was occupied. The marines and units of the Land Forces stationed in Rotterdam, however, held out at the Maas bridges, so that the Germans did not succeed in taking the city completely. Destroyer Hr.Ms. Van Galen was instructed to steam up to Rotterdam. Fokker G.I aircraft took off from Waalhaven Airport and shot down several German aircraft. For the Germans, the war in the Netherlands turned out to be unexpectedly slow. General Rudolf Schmidt, commander of the 39th Motorized Corps, had already been ordered by his superior, General Georg von Küchler, to break the resistance in Rotterdam by all means. It is plausible that Hitler, who on Monday 13 May expressed his concern about the lack of progress in the Netherlands, ordered that the Dutch resistance be tackled harder and faster. Kampfgeschwader 54 was withdrawn from the Belgian front to be deployed in the Netherlands. This concerned a unit of heavy bombers, in addition to the Stukas necessary for a tactical breakthrough. Hitler's goal was therefore, as Dr. Loe de Jong argues in his The Kingdom of the Netherlands in the Second World War, not a breakthrough across the Willemsbrug, but the capitulation of the Netherlands. If the Netherlands did not capitulate, Utrecht, The Hague, Amsterdam, Haarlem and other large cities would also be bombed. Against the international law defense that Rotterdam was a defended city, it can therefore be argued that the bombardment was part of a broader plan.

On 14 May 1940, between 9 and 10 am, General Schmidt sent an ultimatum to Colonel Scharroo, the Dutch commander of Rotterdam, and to Mayor Oud. Colonel Scharroo received the three German soldiers, who delivered the ultimatum under a white flag, without Oud's presence. He did let him read the letter. The letter was signed with the commander of the German forces, without signature or rank. Scharroo thought this was too vague ('a scrap of paper') to surrender Rotterdam. The ultimatum was received by Scharroo at 10.30 am and stated that two hours after receipt, measures to destroy Rotterdam would be taken. Scharroo telephoned the Dutch commander-in-chief, General Winkelman, and said that he was not in the mood to 'capitulate on this rag', but acknowledged that the competence lay with Winkelman. From a military point of view, he saw no need to capitulate, there was anti-aircraft fire on the way to the Willemsbrug, preparations were made for the destruction of the railway bridge, and Rotterdam-North was free of German troops. Mayor Oud had difficulty in connecting with General Winkelman, and indicated that the national interest came before the interest of the city of Rotterdam. However, he added that if the Dutch defense was hopeless, Rotterdam would be spared