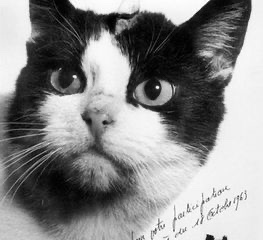 Félicette (nickname: Astro cat) (date of death January 1964) was the first cat to travel into space. She was part of the French space program and to this day is the only cat to have lived and survived in space. Her stay in space lasted 15 minutes. The purpose of her space journey was to gain more scientific knowledge about the effects of weightlessness. In addition, the flight was of great importance to France, which established itself as the third space-faring nation in the world. Only the Soviet Union and the United States had preceded France, but had already sent people into space, such as Yuri Gagarin and Alan Shepard.

Félicette was a white and black street cat from Paris, who was found by an animal dealer and sold to the French government. In 1963, it had fourteen cats in training to deal with high g-forces and changes in pressure in compression chambers. This was done at the Center d'Enseignement et de Recherches de Médecine Aéronautique (CERMA). Before the training and testing began, all cats were given permanent electrodes in their brains to monitor neurological activity. On October 18, 1963 at 8:09 AM, the French Hammaguir launch site in Algeria launched a Véronique sounding rocket with Félicette on board. The rocket reached an altitude of 156 kilometers and the capsule containing Félicette was parachuted back to Earth. The cat survived the flight with an acceleration of 9.5 g and made a safe landing. After her return, CERMA studied the animal for two to three months. She was then put to sleep so scientists could examine the electrodes still in her head.

Other animals in space

A week after the launch of Félicette, on October 24, 1963, a second similar rocket containing a cat was launched. Something went wrong during the launch of that flight, so that the rocket and cat could only be recovered after two days. This cat had not survived the flight. There have been no known launches with cats on board since then. Other than the two mentioned rocket launches with cats on board have not been confirmed. Rats had previously been shot into space in the French space program. Previous animals that made a space journey included fireflies in 1946, the monkey Albert II in 1949 and a mouse in 1950. The Russian dogs Tsygan and Dezik made a flight in 1951. The dog Laika orbited the Earth in 1957.

In 2017, a crowdfunding project was completed on Kickstarter to raise 50,000 euros for a bronze memorial to Félicette, in the form of a statue depicting the animal in combination with a rocket. The intention was to erect the memorial in the city of Paris in 2018. The target amount of the project has been reached. In April 2019, it was announced that the statue was to come to the International Space University in Strasbourg. The statue was unveiled on December 18, 2019. The statue is 1.5 meters high and finally shows Félicette on a globe, gazing at the sky.