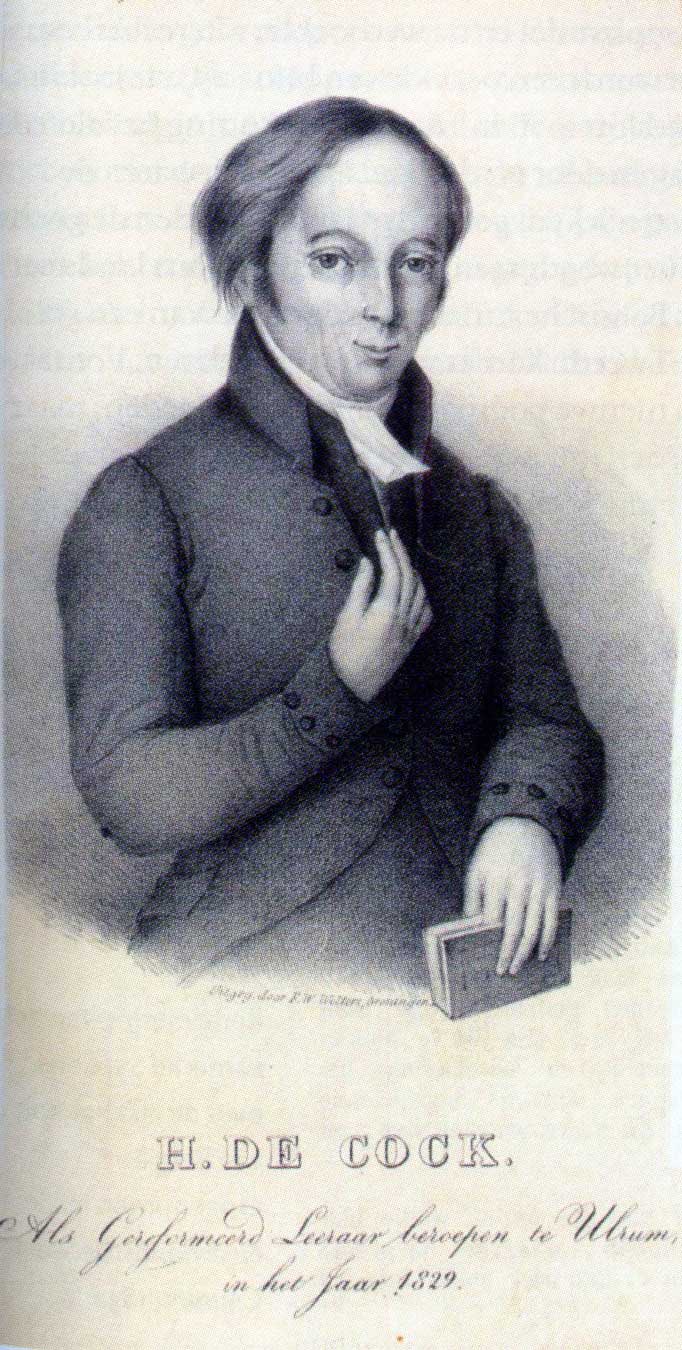 Hendrik de Cock (Veendam, April 12, 1801 - Groningen, November 14, 1842) was a Dutch minister who was at the origin of the Secession of 1834, which eventually led to the emergence of independent Reformed churches alongside the Dutch Reformed Church. After studying in Groningen, he became a minister in successively Eppenhuizen (1824), Noordlaren (1827) and Ulrum (1829). De Cock was married to Frouwe Helenius Venema. Together they had seven children. Their son Helenius de Cock later became a minister and professor at the theological school in Kampen.

Pastorship in Ulrum for 'the Secession'

In Ulrum, De Cock was the successor of Petrus Hofstede de Groot. Congregation members told De Cock that his preaching lacked depth. He took this criticism so seriously that he began to delve into Calvin's writings. In the end, he came to the conclusion that Biblical teaching was not always followed in the church. A certain statement by one of his church members in particular touched De Cock deeply ("If I had to instill even one sigh to my salvation, I was lost forever"). Thus De Cock left the less orthodox direction of the Groningen theologians and switched to the orthodox Calvinist group. He rejected the emphasis on the educative power of the gospel, and emphasized original sin in his sermons. In his brochure 'Christ's sheepfold infested by two wolves', De Cock used sharp language against two colleagues who dismissed established Christianity as 'sick mystics'. Because he openly criticized his fellow ministers, he was suspended by the church board on December 19, 1833 (ie just before Christmas). He was even deposed six months later. This was against the will of the Ulrum consistory, which could not comprehend the deposition of a minister who preached according to the official confessions. De Cock was also confronted with a complaint before the synod.

The period of 'the Secession'

The denouement came less than a year later when De Cock and his followers (including the entire consistory of the Dutch Reformed Church in Ulrum) officially separated from the Dutch Reformed Church on October 13, 1834. The next day they signed the Act of Secession or Return. Those who were responsible for the management of the church property (churchwardens and other notables) did not agree with this, with the result that De Cock and his separated consistory could no longer use the church building. Since the ecclesiastical restructuring of 1816 imposed by the king, all ecclesiastical property has been the property of the rural church. At that time associations needed an authorization from the king, but King William I did not grant it; as a sanction, soldiers were billeted with the Secessionists (dragonnade). De Cock was even sentenced to three months in prison for 'disturbing the peace' and expelled from the rectory with his family. After a short time, the number of followers ran into the thousands (by others they were mockingly referred to as Cocksians). Besides the secessionists from Ulrum, a number of other Reformed congregations went along. This separatist movement was given the name De Afscheid and was initially called the Christian Afscheiden Kerk. In 1836 alone there were more than thirty separate churches in Groningen and Drenthe. De Cock did pastoral care for a large area, initially the whole region, trained other pastors, and wrote numerous brochures in which he explained his ideas.

De Cock also managed to convert followers in present-day Germany, especially in the County of Bentheim and East Friesland. In 1838 he converted and baptized a resident of Uelsen near Bentheim, and in 1840 someone from Bad Bentheim itself. Numerous small group