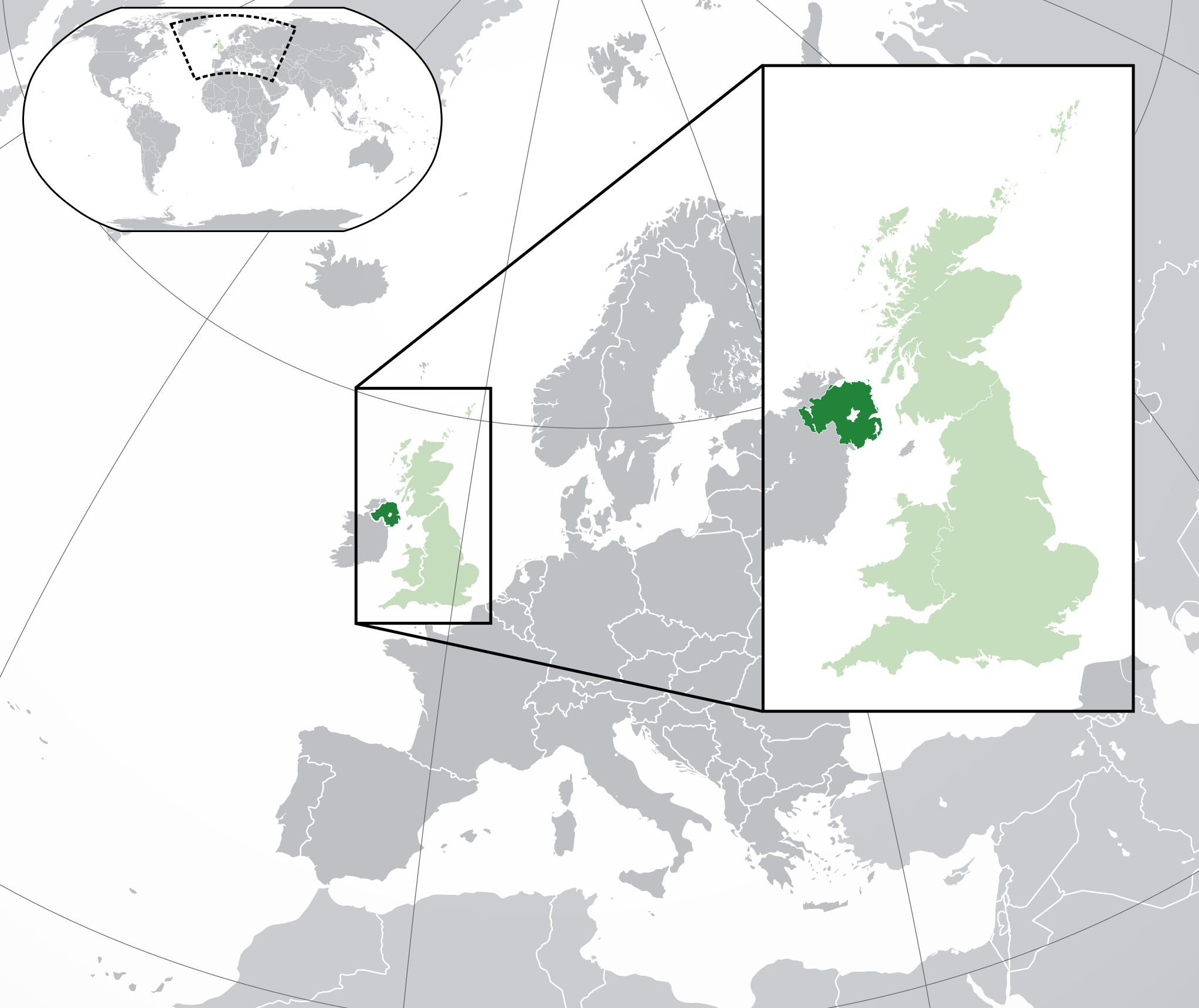 Northern Ireland (English: Northern Ireland, Irish Gaelic: Tuaisceart Éireann, Ulster Scots: Norlin Airlann) is a constituent country with England, Scotland and Wales part of one state: the United Kingdom. It is the only one of these four areas that is not on the island of Great Britain, but on the island of Ireland, and forms the northeastern part of it. Northern Ireland borders the Republic of Ireland. In Northern Ireland, as in all of Ireland, English is the dominant language. On a smaller scale, and mainly for symbolic reasons, Irish is also sometimes used, albeit less than in the Republic of Ireland. With 13,793 km2, the area of ​​Northern Ireland is about half of Belgium or a third of the Netherlands. At the 2019 census, Northern Ireland had 1,893,700 inhabitants. The country has a population density of 137 inhabitants per km². Northern Ireland is defined as a country, province or region of the United Kingdom. Since the signing of the Good Friday Agreement in 1998, Northern Ireland has been largely self-governing, but as a sovereign state only the United Kingdom plays a role in international relations. The Good Friday Agreement stipulates that if a majority of the population so wishes, Northern Ireland can become part of Ireland. The Unionists, historically Protestants who make up 48% of the population, are the majority who want to maintain ties with the British Union. Historically, Catholics are more Irish-minded and currently make up 45% of the population. In the Assembly for Northern Ireland, the Parliament of Northern Ireland, votes for Unionists (about 45% in 2017) and Republicans/Nationalists (about 40% in 2017) are on a declining trend, in favor of other political parties that have a more take a moderate stance (about 13% in 2017). In 2017, for the first time, unionists no longer had a majority in seats in the Assembly. Like in the rest of the UK, payment is made in sterling, which is subdivided into 100 pence. The Northern Ireland vehicle registration number is GB (traditional UK registration number). The time is equal to Greenwich Mean Time, the telephone prefix is ​​44 (but from Ireland they use a domestic number) and the top-level domain is .uk.

Northern Ireland came into existence in its current form in 1921, while the rest of the island was permanently separated from the United Kingdom as the Irish Free State. The entire island was one of the three kingdoms of the United Kingdom until 1919. Ireland had always been a difficult possession for the English kings. In the north of the island, the resistance against English rule was greatest. One of the ways to break that resistance was a policy of colonization of the area by English and especially Scottish farmers. In the 16th century, these were given the opportunity to start farms on land confiscated from the greatest opponents. The new residents were Protestants, generally followers of one of the Calvinist denominations that had emerged in Scotland after the Reformation. The original Irish population had always remained Roman Catholic. As a result of this policy, a Protestant majority grew in the province of Ulster (the north of the island) who felt strongly connected with the English king. That connection came under severe pressure when the Catholic James II ascended the throne. The expulsion of James by his son-in-law, William III of Orange-Nassau, during the Glorious Revolution and the eventual defeat of James during the Battle of the Boyne, are in the view of the Protestants the most important events in the history of the island. . This is commemorated annually by many Protestants in the Orange Marches. Yet it was Ulster Protestants who played a major role in the self-government movement for all of Ireland in the 18th and 19th centuries. Theobald Wo