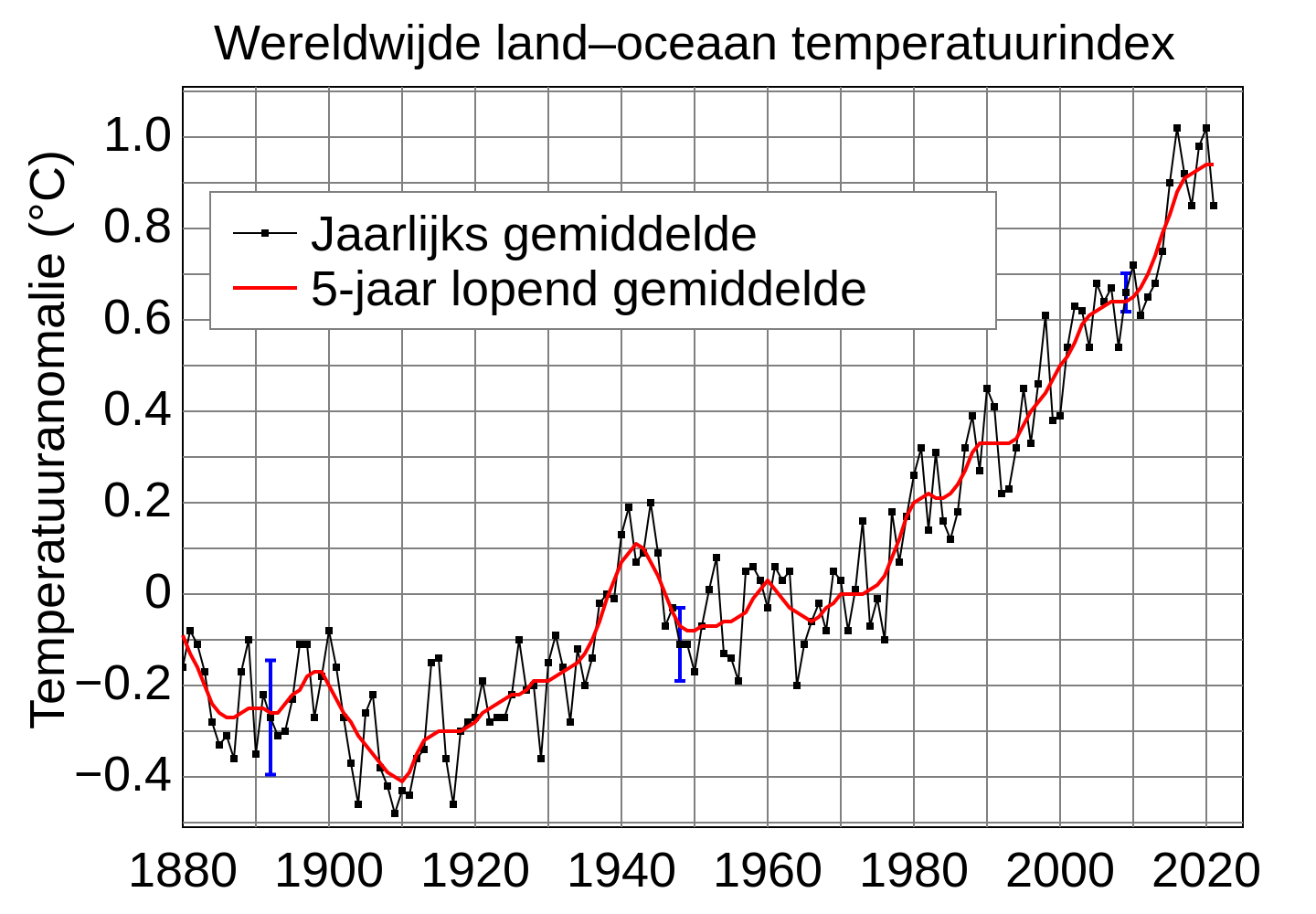 Global warming, also known as climate change, global warming, climate disruption or climate crisis, is the rise in global temperatures since the pre-industrial period. The average air temperature of Earth's atmosphere at ground level was about 1.09 °C (0.95–1.20 °C) higher from 2011 to 2020 than from 1850 to 1900. This warming is accompanied by with global climate changes, such as changes in rainfall patterns and desertification. Global warming is part of the more general environmental problem. It is undisputed among climate scientists that the average temperature on Earth has increased since the mid-20th century. There is also consensus about the cause: this trend is mainly caused by an increase in the concentration of greenhouse gases in the atmosphere. In turn, this is the result of human activities such as fossil fuel use, deforestation and certain industrial and agricultural activities. Since the beginning of the 21st century, the majority of the public and politicians are also of the opinion that there is a climate problem and that this is largely the result of human actions. Various climate models predict a temperature rise of less than one degree in the short term. By the late 21st century, this could have increased to several degrees. All major climate changes are disruptive and have previously led to the extinction of many species, the migration of populations, and major changes in land surface and ocean circulation. The rate of current climate change is faster than most previous changes, making adaptation for nature and adaptation for human society more difficult. In addition, the increased complexity of human society means that there is an increasing risk. The current climate change therefore entails a considerably greater risk of damage. In particular, temperature increases of more than 2 °C entail major changes for people and the environment, including due to sea level rise, increased periods of drought and heat, extreme precipitation and a decrease in biodiversity. A temperature rise of 2 °C has much more far-reaching consequences than a rise of 1.5 °C. Various measures are possible to minimize the damage caused by climate change. On the one hand, it is possible to tackle the cause (mitigation): emitting fewer greenhouse gases by making energy use more sustainable and better protecting nature areas. On the other hand, societies will have to adapt (adaptation) by, for example, strengthening dykes and cultivating better adapted crops. In the Paris agreement of December 2015, it was agreed to limit global warming to well below 2 °C, but preferably to a maximum of 1.5 °C. It has also been agreed in this treaty that money will be released to help poorer countries with the necessary adjustments.

There is a large number of independent observations from different fields of science, such as meteorology, glaciology, oceanography and biology, which show that the Earth is warming. Meteorology shows that the