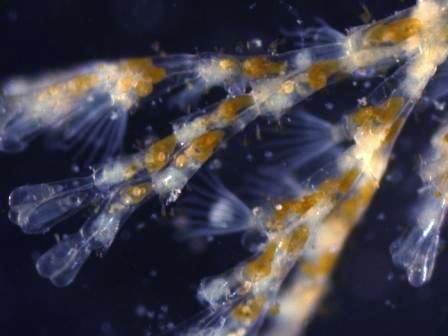 A polyp is one of two morphological stages of a cnidarian. Polyps attach to the seabed and capture food using tentacles at the top, often mistaken for plants. The typical structure of a polyp is a narrow tube with a widened base on the aboral side (i.e. away from the mouth opening) and a tentacle whorl on the oral side. Almost all polyps are sessile. Some species have developed a pelagic way of life (such as Velella). In colonial form, polyps can grow into extensive reefs. In colonial forms the feet of the different individuals are fused together. Many cnidarians are polyps for only part of their life cycle. The other life stage is called meduse.

The Cnidarians are a large group of marine animals that can be divided into five classes. Each class has its own life stages. The flower animals (Anthozoa), which include sea anemones and corals, only know the polyp stage: these animals are attached to the substrate throughout their lives. In the hydroid polyps (Hydrozoa), an individual can be either a polyp or meduse; however, most species have both stages in their life cycle. The meduse stage is dominant in the disk jellyfish (Scyphozoa) class. In some species, the larvae turn into a polyp from which small jellyfish will be released. In the cubic jellyfish (Cubozoa) the polyp develops directly in a meduse.