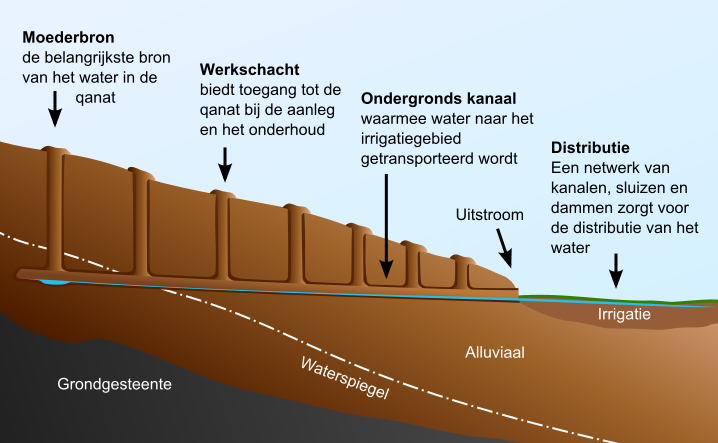 A qanat (Arabic: قناة) or karez (Persian: كاريز) is an underground aqueduct that transports groundwater from the mountains to lower areas. A qanat is usually fed by an aquifer, an aquifer. The decay, the difference in height between source and destination, causes gravity to guide the water to the outflow. The qanat arose in ancient times in northwestern Iran or neighboring Kurdistan, probably in the first millennium BC, possibly even earlier. . A qanat was dug out by hand, with vertical shafts being built at regular intervals to bring in and remove people and equipment and to remove debris. Building a qanat involved major investment and took years or even decades to build. The technology was spread from Iran and now qanats can be found from Japan to Morocco and even some in America. Hardly any new ones have been built since the 1970s. However, the existing qanats are numerous and many still provide water, some for hundreds of years. At the beginning of the 21st century, thousands of qanats are still in use in Iran, which provide water for millions of people and their fields. Although the vast majority of literature cites Iran as the source of the invention, the scientific debate about its origin has by no means been settled. . What is certain is that the qanat is nowhere as important as in Iran: 50-60% of all more or less functioning qanats are located in that country, while about 35% were built in two countries where direct Iranian influence is demonstrable. : Afghanistan and Oman.

Qanāt is an Arabic word meaning "lance" or "tube" derived from a Semitic verb meaning "to dig." The word qanat is also used in Iran, where people also speak of a karez or karīz. This Persian word comes from 'kār' (to pull forward, as with a plow) and 'rēz' (to flow) and is also used in Afghanistan, Pakistan and Turkmenistan. The word 'falaj' (plural 'aflaj') common in Oman and the Emirates has a source in a Semitic word for dividing into (equal) parts.

There are other words for the qanat. From Syria to Algeria the word 'foggara' or 'fuqarā' is common, although in Syria it is also referred to as a 'qanat romani' (Roman qanat) and in parts of the Sahara it is referred to as 'Persian works'. In Morocco the aqueduct is called 'khattara' or 'rhettara'. Some French authors use 'foggara' and in other languages ​​the generic word qanat is usually used. In English, in addition to qanat, '(in)filtration gallery' is also used, although the term is sometimes also used for other tunnels or pipes that extract groundwater. In the Canary Islands, in Mexico and in some other Spanish-speaking areas the term 'galería (filtrante)' is used, while in Madrid the term 'viaje de agua' is used.

A qanat has the following specific characteristics. There is talk of an underground construction and a tunnel with a slight slope so that the water flows naturally. Water is tapped in an aquifer and it is extracted as drinking water and for irrigation. Sometimes a few additional characteristics are added to the definition, namely that the technology must come from Iran, that work shafts are present and that there is one parent source.

Some of the science believes that a qanat can also have surface water as a source, or shallow groundwater. In combination with surface water, the qanat shows similarities with the Roman aqueduct, which was also largely built underground with a slight slope to allow the water to flow. Draining shallow groundwater, related to drainage, was invented at approximately the same time in several places