Russian invasion of Ukraine in 2022 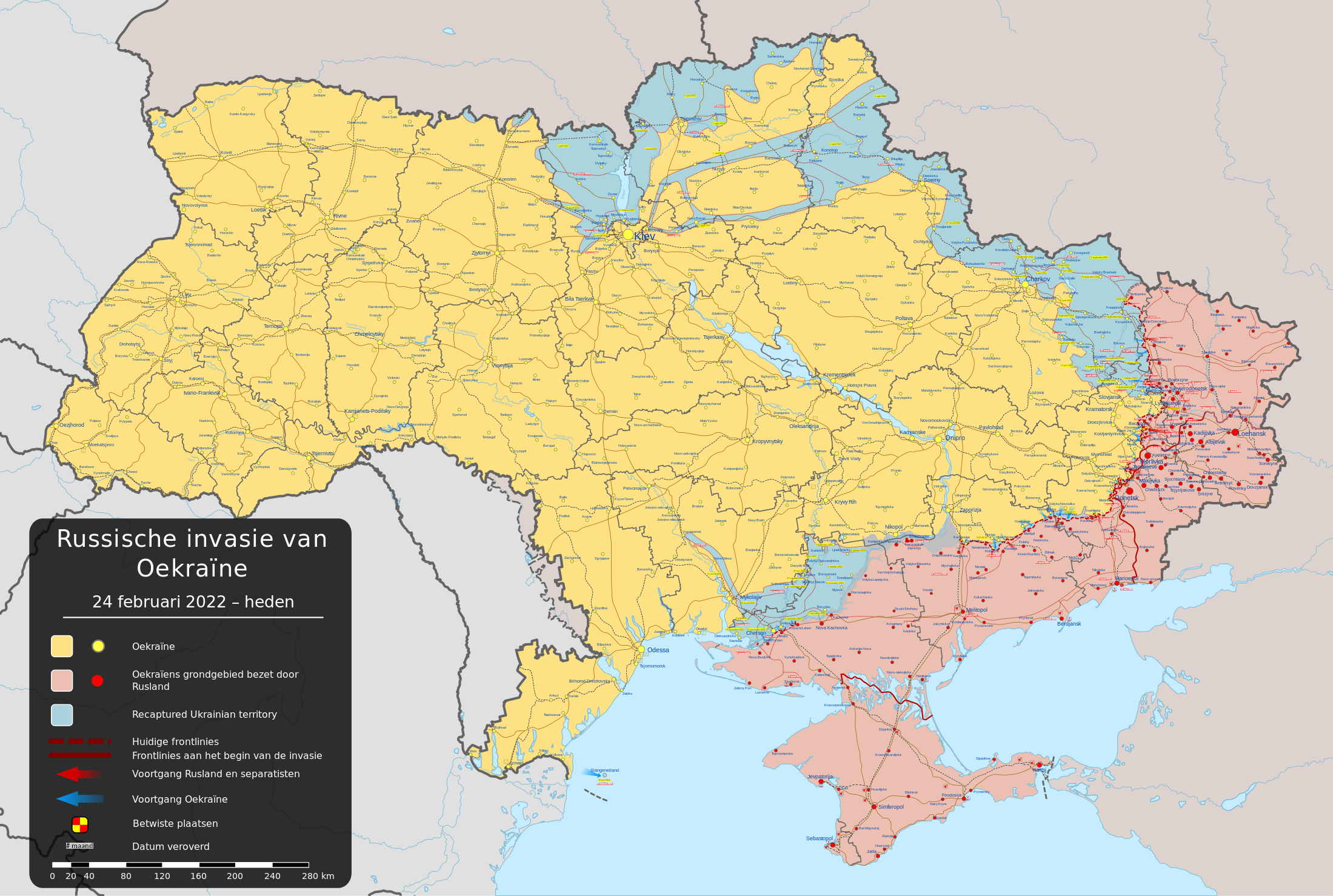 The Russian invasion of Ukraine is a war of aggression by Russia against neighboring Ukraine. The invasion began on February 24, 2022 and is part of the Russo-Ukrainian War that has been going on since 2014. Russia, which occupied and annexed the Ukrainian peninsula of Crimea in 2014 and supported pro-Russian separatists in the War in Eastern Ukraine, began a major military build-up along its border with Ukraine in 2021. At the same time, Russian President Vladimir Putin stated that he would never accept Ukraine's possible accession to NATO and claimed that he was concerned about Ukraine's Russian-speaking population. However, the Russian government maintained for a long time that there were no plans to invade the neighboring country. After Putin recognized the two separatist people's republics of Donetsk and Lugansk as independent states on Ukrainian territory on February 21, he sent there with the approval of the Russian parliament soldiers under the guise of a "peace mission". On February 24, Putin announced a "special military operation" to "demilitarize and denazify" Ukraine. Almost immediately afterwards, cruise missiles exploded in Kiev and other Ukrainian cities and Russian ground forces invaded Ukraine from Russia, Belarus, and the occupied areas of Donetsk and Lugansk. In response, Ukrainian President Volodymyr Zelensky declared martial law and a general mobilization. Russian soldiers advanced on cities such as Kherson, Mariupol, Sumy, Chernihiv, Kharkov and the capital Kiev. In doing so, they encountered strong military and local resistance and faced logistical challenges that hampered their progress. On February 27, Putin implicitly threatened to use nuclear weapons. Two weeks after the invasion began, the UN reported that more than 2.5 million people had already fled Ukraine. It was said to be the world's fastest growing refugee crisis since World War II. In addition, there were almost two million displaced persons within Ukraine. The invasion was widely condemned internationally. Several countries provided humanitarian, military and financial aid to Ukraine. There was no direct military interference, although volunteers traveled from several countries to serve in the Ukrainian Foreign Legion. However, many Western countries imposed sanctions against Russia, which led to a financial crisis in the country. Major companies imposed a boycott of Russia and Belarus. Protests took place worldwide, including in Russia itself, where demonstrators were arrested en masse and the Russian government stepped up repression against independent media. Ukraine filed a lawsuit against Russia at the International Court of Justice (ICJ) on February 25, 2022 for manipulating the concept of genocide to justify aggression. This was possible because both Russia and Ukraine were parties to the 1948 Genocide Convention. On March 16, the ICJ demanded that Russia immediately cease all military activities in Ukraine. The International Criminal Court is investigating war crimes in Ukraine.

In February 2014, then-pro-Russian Ukrainian President Viktor Yanukovych was ousted after months of pro-Western protests ending in the Revolution of Dignity in Kiev, which left more than 100 dead. Neighboring Russia subsequently occupied the Crimean peninsula and provided military support to rebels who launched an armed struggle in the eastern Donbas region. The insurgents managed to take the cities of Donetsk and Luhansk and parts of the area up to the Russian border and proclaimed the self-proclaimed People's Republics of Donetsk and Lugansk. In the years that followed, the war in eastern Ukraine continued to rage, resulting in thousands of deaths. aanl