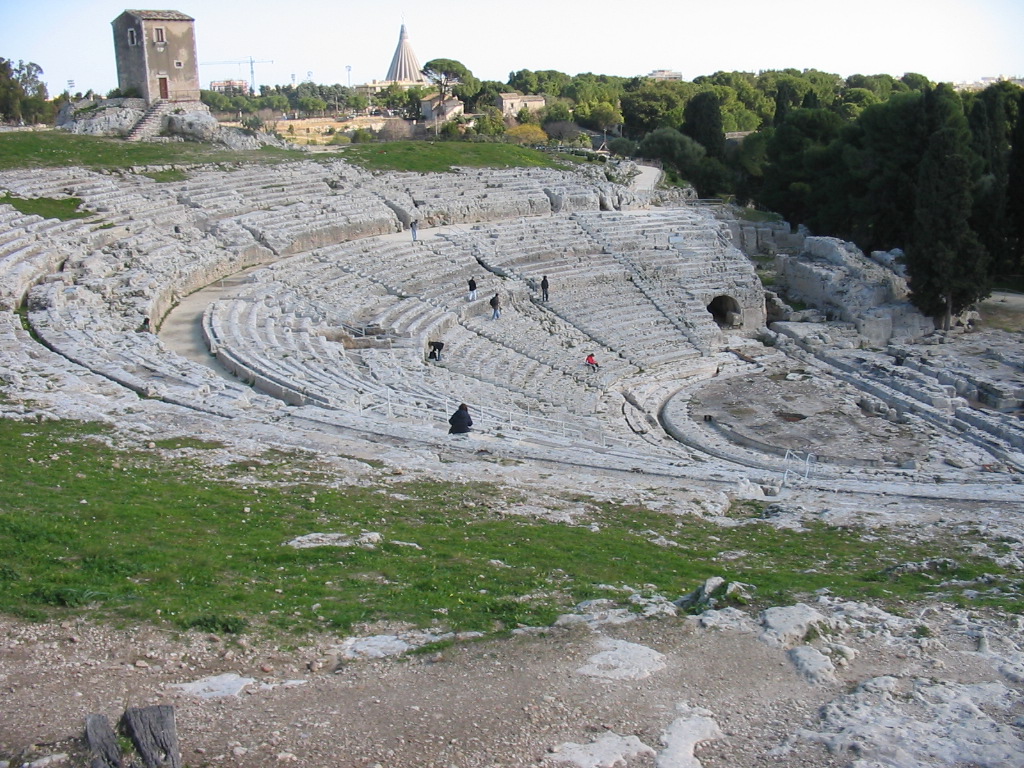 Syracuse (Italian: Siracusa, Sicilian: Sarausa) is a port city and comune in southeastern Sicily, Italy. The city is located on the Ionian Sea (part of the Mediterranean). In 2005 the city had a population of more than 123,000. Syracuse is also the capital of the province of Syracuse. In 2005, the city, along with the nearby Rock Necropolis of Pantalica, was placed on the UNESCO World Heritage List. The following frazioni are part of the municipality: Belvedere, Cassibile Fontane Bianche, Isola, Santa Teresa Longarini Scalo, Targia.

The city of Syracuse has a very rich history. Originally, Syracuse was a Greek colony, founded by Greek settlers from Corinth in 734 BC. They named this colony Συρακοῦσαι, syrakoúsai, after the name of a swamp on the site where the city was founded.

Over time, it became the most important Greek city on the island, as well as founding Greek colonies in Sicily. The tyrant Gelon seized power in the city in the year 485 BC. Syracuse formed an empire that encompassed much of the island. At the height of its power it was a rival to both Athens and Carthage and could be compared to these in population. Athens tried in 415 BC. during the Sicilian Expedition with a large expeditionary force to conquer the city in vain. The Athenian army lost many soldiers in several battles around highly secured Syracuse - huge city walls were built - and thousands of surviving Athenians were captured and enslaved in the quarries of Syracuse.

Due to the large merchant fleet, considerable wealth flowed to the city from all over the Mediterranean area. Syracuse itself was a major grain exporter; especially to Magna Graecia and more northerly Italy, including the still small Rome. This allowed the wealthy elite to embellish their city with all kinds of public buildings and temples. In the period 300-200 BC, Syracuse was one of the most beautiful cities in the Mediterranean. The great importance of the city came to an end when Syracuse, an ally of Rome during the First Punic War, sided with Carthage after the death of King Hiero II during the Second Punic War.

In 212 BC. the Romans conquered the city and it was destroyed, after which it became a minor city for a while. During the battle for the city, Archimedes, among others, also died, who according to legends tried to defend the city using his knowledge of optics. He is said to have allowed the strong sunlight to converge on the Roman ships that caught fire through huge mirrors. His self-invented catapult was also used during the defense of the city. After this conquest, the Romans systematically looted all works of art and shipped them to Rome. This event is seen as the first organized large-scale form of looted art. In the Christian period of the Roman Empire, an archiepiscopal seat was established and this slightly increased the prestige of the city.

The Muslim Aghlabids besieged Syracuse twice during their conquest of Sicily from the Byzantines. The first siege lasted almost a year, but the Arabs were unable to take the city. The second siege did lead to the fall of the city, which was partially destroyed. Its significance diminished even more when the Arabs proclaimed Palermo the capital of the Emirate of Sicily. From then on, Syracuse was permanently reduced to a provincial city. The Normans captured her in 1085.

On April 29, 1676, Michiel Adriaenszoon de Ruyter died in Syracuse Bay from wound fever after being hit by a French cannonball during