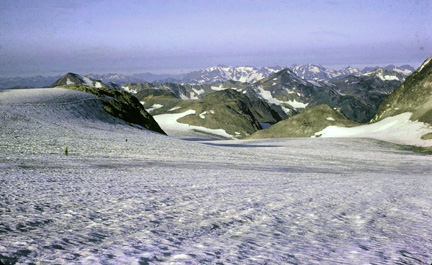 Glaciologists observe that glaciers are retreating all over the world and there is sufficient knowledge to establish that this started in the mid-19th century. This glacier retreat, which began around 1850, followed the Little Ice Age, meaning the relatively cold period, which lasted from the 15th to the 19th century. The glaciers in the Alps have decreased considerably over the entire period since 1900. The effects of glacier retreat are evident in their surroundings, in the smooth eroded floor of the old glacier tongues, which have disappeared, and in moraines, which lie some distance from the glacier that once pushed them up. This glacier retreat started mainly in mid-latitude mountains such as the Himalayas, Alps, Rocky Mountains, the southern part of the Andes, and isolated peaks in the tropics, such as Mount Kilimanjaro in Africa. They initially showed proportionally the greatest losses of glacial ice. Although it continues at the same speed everywhere, that has changed worldwide since the past six warm years. It now mainly concerns the ice sheets of the north and south poles. The loss of glaciers is often cited as an indication of global warming and coincides with the measured increase in greenhouse gases in the atmosphere. The same historical warming curve of the Earth follows from the analysis of a large number of glaciers and from direct independent temperature measurements. For the unit of the amount of ice that has melted at a certain place in a certain period, mmwe, millimeter water equivalent, is usually chosen. .

Situation on the continents

France's six largest glaciers are declining in size. On Mont Blanc, the highest mountain in the Alps, the Argentière Glacier has shortened by 1150 m since 1870. The other glaciers on Mont Blanc also became shorter. Below this is the Mer de Glace, with 12 km the largest French glacier, which became 500 meters shorter between 1994 and 2008. Since the end of the Little Ice Age, the retreat has been 2300 m. The Bosson Glacier, which descended from its peak at 4807 m in 1900 to a level of 1050 m in 1900, did not fall below 1400 m above sea level in 2008. The Alps were a period between the 1950s and 1980s when glaciers did not lose volume, but researchers found that the glaciers in the Alps seem to be declining again faster than they did a few decades ago. In a study published in 2009 by the University of Zurich, out of 89 glaciers, 76 had declined, 5 stayed the same and 8 increased since 1973. The Trift Glacier showed the greatest decrease, losing 350 meters in length between 2003 and 2005. The Aletsch Glacier is Switzerland's largest glacier and has been tracked since the late 19th century. The decrease in length between 1880 and 2009 was 2.8 km. The Morteratsch Glacier in Switzerland has been measured and studied since 1878. The retreat between 1878 and 1998 was 2 km with an average of 17 meters per year. This long-term average was significantly exceeded in the years