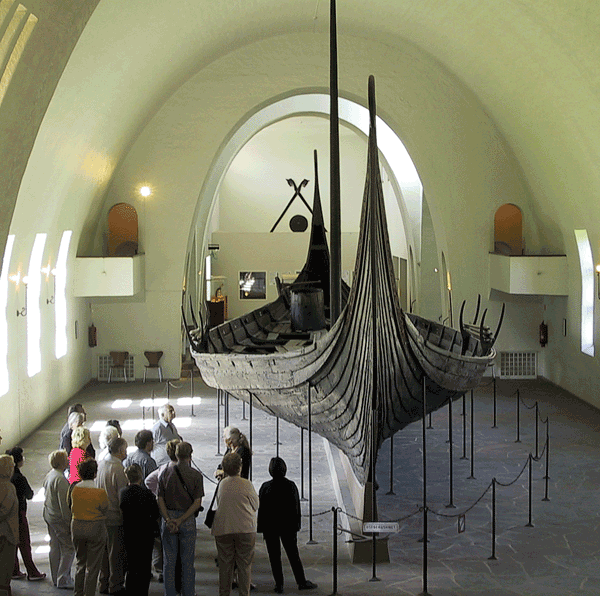 A Viking ship is a wooden ship that was used by the Vikings during the period from about 789 to 1100. Different Viking ships are the longship, the knarr and the karve. Other names used for a longship are drak(k)ar and snek. The Viking ship played a crucial role in Viking society and economy. It was used for transportation, trade, war missions, looting and exploration. The ship also played an important role in the art and culture of the Vikings.

Viking ships have been found in ship graves, as shipwrecks and as sunken ships on the seabed. The best-known archaeological finds are the Gokstad ship, Oseberg ship and Tune ship discovered in Norway between 1867 and 1904. Also known are the five Skuldelev ships that were found around 1960 on the bottom of the Roskildefjord near Skuldelev in Denmark. The finds allow for a good reconstruction.

The Viking ship had a high degree of perfection for that time and was superior in sailing speed. The construction of the entire ship was strong, light and flexible. The front and rear of the ship had a similar shape with a ship's hull made of riveted planks. The main frame showed a pure brace shape. Due to the shallow draft it could sail on almost every river and land in many places due to the fairly flat bottom. It was seaworthy enough to withstand a storm in the North Atlantic. Furthermore, the shape of the Viking ship was flowing. All ships mentioned in this article have a long hull with a sharp bow and stern. At the time, on the caravel-built ships of the Mediterranean and the Indian Ocean, the hulls lay edge to edge, in contrast to the clinker-riveted Viking ships.

The type used as a warship and transport ship was the longship that could be sailed and rowed. The longship has a light construction with a length-to-width ratio of approximately 10:1 to 5:1 and a limited draft. A longship could be rowed easily and developed a considerable speed. It was sailed with a transverse sail. Because intimidation and appearance were important, the longship was often decorated with carvings on the edges and the sterns. The carving on the stems was often a serpent's head or a dragon. This is why the name drak(k)ar came into being for these ships. A well-known longship recovered is the Skuldelev 2. This ship was approximately 30 meters long, almost 4 meters wide and had a draft of 0.9 meters with a fully loaded weight of 25 tons. It could reach a top speed of 15 to 20 knots (27 to 36 km/h) and carry a crew of up to 80 people, including 60 rowers. In 1997 the largest longship was found in the Danish city of Roskilde. This longship, the Roskilde 6, was approximately 36 meters long, 3.5 meters wide and probably accommodated 78 rowers and a total of 100 crew members.

The Snek was the smallest ship among the longships. It was widely used. An average snek is estimated at a length of 17 meters, 2.5 meters wide, 0.5 meters draft and fully loaded 6 tons. It then carried a crew of 30 men, 26 of whom were rowers. Presumably the Skuldelev 5, which could reach a top speed of 15 knots, was of the Snek type.

The Knarr was widely used as a seagoing freighter and was mostly sailed. The knarr was functionally built and therefore had no superfluous things such as wood carvings. This in contrast to longships such as the Snek, which also served for war purposes and therefore had to impress. The knarr was the forerunner of the cog. There were considerable differences between a longship and a Knarr: the Knarr was wider (3:1) and had a quarterdeck fore and aft with facilities for