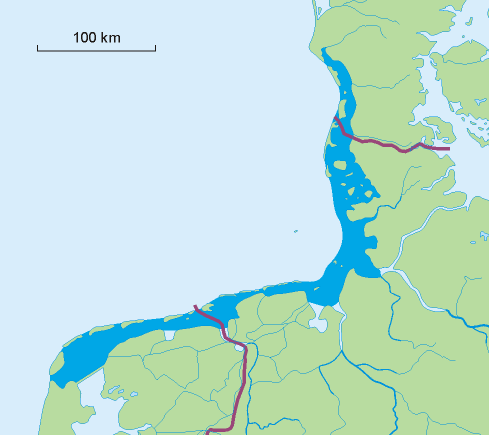 The Wadden Sea (Frisian: Waadsee, German: Wattenmeer, Danish: Vadehavet) is the inland sea between the Wadden Islands and the North Sea on the one hand, and the mainland of the Netherlands, Germany and Denmark on the other. The area stretches between Den Helder in the Netherlands and Esbjerg in Denmark, has a length of 500 km and an average width of 20 km. The surface area is approximately 10,000 km², of which approximately 7500 km² is tidal area (tidal flats and sandbanks), 1100 km² islands and 350 km² salt marshes and summer polders. The rest consists of navigation channels. A number of rivers flow into the Wadden Sea. The estuary widened into an estuary such as the Dollard, the Lauwerszee, the Middelzee and the Zuiderzee. The last three have now been closed. The Afsluitdijk, which was completed in 1932, has been part of the southern border of the Wadden Sea since that year. The Wadden Sea is interrupted by the Hindenburgdamm of the island of Sylt and the Rømøvej, the dam to Rømø. The Wadden Sea area has great natural value and is on the UNESCO World Heritage List. The World Heritage Site covers more than 12,000 km², which also includes the transition area to the North Sea (about 4,000 km²). The Wadden Islands of the Netherlands and Schleswig-Holstein (almost 700 km²) and the estuaries of the Ems, Außenjade, Weser and Elbe are largely excluded. However, these areas are largely subject to the Natura 2000 regime. The protection measures are coordinated by the International Wadden Sea Secretariat (CWSS) in Wilhelmshaven, in which the Netherlands, Germany and Denmark work together. Decisions are taken during triennial ministerial conferences, where the ministers concerned consult. In addition, there are periodic scientific conferences and a Wadden Sea Forum, in which civil society organizations and interest groups can make their voices heard. The vulnerability of this Wadden Sea area was demonstrated by the disaster with MSC Zoë in the night of 1 to 2 January 2019, in which a lot of plastic (granules) and consumer products ended up in the sea. Thousands of volunteers helped clear the shoreline. The exact consequences for the area are still being investigated. Besides being a nature reserve, the Wadden Sea is also important for fishing, recreation, mineral extraction and other economic activities. In the Dutch part, the Nederlandse Aardolie Maatschappij extracts natural gas. The Dutch territory of the Wadden Sea was added to the provinces of North Holland, Friesland and Groningen in 1981. In 1986 the Wadden Sea was also classified as municipal. It sometimes happened that a child was born on a boat, on its way from an island to a hospital: previously such a child, who was born in the Netherlands but not in a municipality, had to register with the registry office in The Hague. be indicated.

The Wadden Sea is part of the Wadden Sea coast of the North Sea. Typical are the sandbanks that fall dry during low tide, separated by more or less deep channels. Along the coast we usually find a muddy strip of mud. With every high tide, the salt water of the North Sea is pushed up into the mudflats through the tidal inlets between the Wadden Islands. A number of rivers flow into the Wadden Sea. In Germany the Ems, the Weser and the Elbe, in the Netherlands (via the locks in the Afsluitdijk) the IJssel and other rivers and canals draining into the IJsselmeer.

The word mudflat is related to the Latin word vadum, which means "ford". The area that is now known as Waddenzee has been referred to as 't Wad, de Watten or Wadden since the 16th century. As a rule, a distinction was made per region, for example the Frisian Wad, the Groningen Wad or the Uithuizer Wad. The Wadden Sea toponym only appears in the 19th century. The current name Waddenzee is probably derived from the German word Wattenmeer, which was first used in 1859 by the publicist C.P. Hansen, teacher on the island of Sylt.H