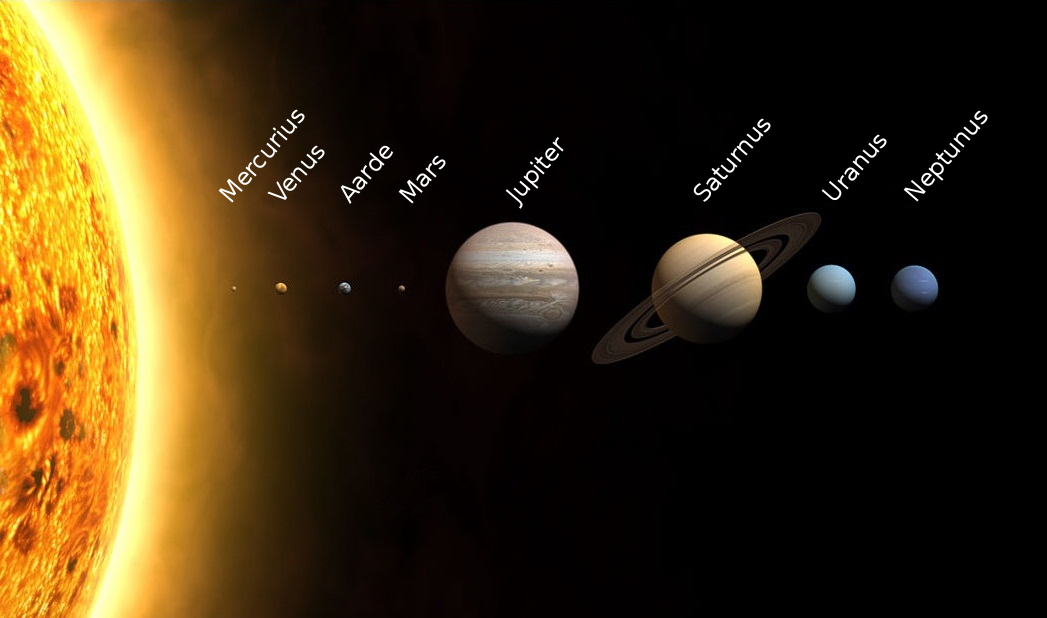 The solar system is the planetary system that consists of the Sun and the celestial bodies that are bound to the Sun by gravity. The Sun is a class G2 main sequence star with a diameter of 1.39 million kilometers. The Sun accounts for 99.86% of the mass in the solar system. In addition to the Sun, the solar system contains eight planets, five dwarf planets, over a million known asteroids, 644 moons of planets, dwarf planets, and asteroids, and 3701 known comets (as of January 2021). Most of these objects revolve around the Sun in orbits with small orbits relative to the ecliptic. In the space between these celestial bodies is the interplanetary matter. According to one definition, the solar system is bounded by the heliopause, the edge of the heliosphere.

The solar system was formed about 4.5 billion years ago, when an interstellar cloud of gas became active for unknown reasons, shrinking under its own weight and spinning faster and faster, creating the Sun in the center of this gas cloud. The collapse of the center of the gas cloud, also called the solar nebula, took 100,000 years. The enormous heat that was created during the contraction created a small star that sucked up a large part of the gas cloud and thus became a full-fledged star: our Sun. The leftover gas, also called an accretion disk, then began to cool and chunks of ice, rock and metal solidified, which grew larger and larger on impact as they clumped together. Those large chunks collected all the remaining material, except for a few asteroids and meteoroids. Then some chunks (protoplanets) had grown big enough to suck up the last bit of gas. At that point, a million years after the first chunks formed, the Sun suddenly started producing strong radiation, a solar wind, that blew away the mantle surrounding almost all protoplanets except the gas giants. After that, the protoplanets slowly gained a stable orbit around the Sun, and the planets and moons were formed by last major collisions between protoplanets. About 4 billion years ago, the solar system still had to deal with a cosmic bombardment, which created large impact craters on many moons and planets.

The Sun is located in the Local Bubble in the Orion Arm, a spiral arm of the Milky Way, at a distance of 26,490 ± 100 light-years from the galactic center. The solar system moves at a speed of about 220 km/s in 225-250 million years in a fixed orbit around the center of the Milky Way. One theory among scientists is that the route the Sun follows through spiral arms in the Milky Way contributes to the periodic mass extinction of life on Earth.

Traditionally (until 2006) nine planets were included in the solar system. The planets Mercury, Venus, Mars, Jupiter, and Saturn have been known since ancient times. After the invention of the telescope, Uranus (1781), Neptune (1846), and Pluto (1930) were discovered. In the 1990s, it was discovered that the then ninth planet, Pluto, was just one of many similar objects in the Kuiper Belt. The question arose whether these objects similar to Pluto should now all be classified as 'planets'. As larger and larger objects were discovered, such as Quaoar and Varuna, the classic number of nine planets came under pressure. With the discovery of the much larger Eris, a new definition of planet was necessary. According to the new definition, Pluto is now called a "dwarf planet" and the solar system has eight "true" planets. A new planet? † In January 2016, it was reported that there is strong evidence of a ninth planet with dimensions similar to Neptune but well beyond Pluto's orbit. This still hypothetical planet is tentatively referred to as Planet